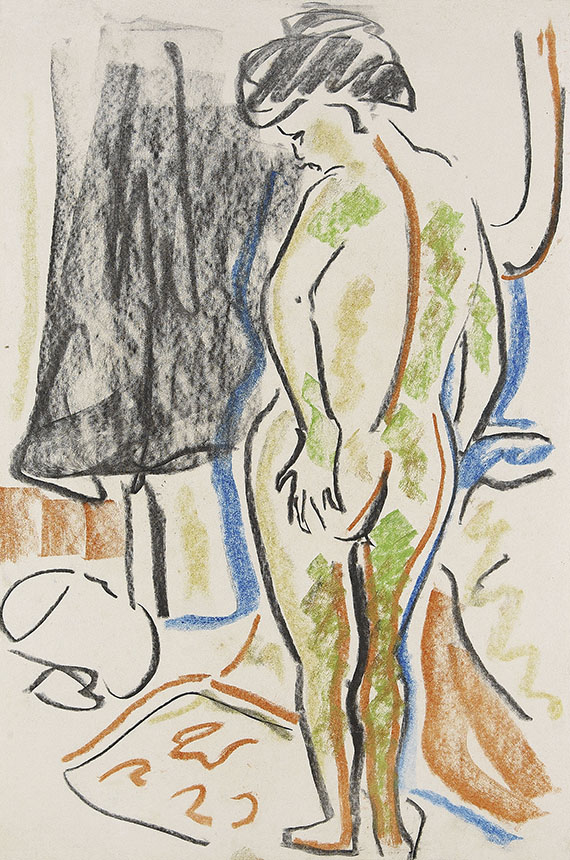 Kirchner studied architecture in Dresden where he met and worked with Fritz Bleyl, Erich Heckel and Karl Schmidt-Rottluff. After finishing his studies, however, he opposed his father's wishes and decided to become a painter. The intense artistic and intellectual relationship between the four artists soon led to the formation of the artist group 'Die Brücke'.

This drawing dates from those startlingly productive Dresden years, in which so many young artists laid the groundwork for later fame. Radical rejection of what was prescribed as drawing from the nude at the art academies of the time can be read from the very free conception of this work. The ‘three-quarters-of-an-hour nude’, as the ‘Die Brücke’ artists called it because it was realised in a very brief but extremely creative working process, is also recognisable in this outstanding drawing. Assured line, which does not allow for even the slightest individualising touch, is aptly complemented by the colors, which have been chosen in such a way that only thus and in this particular context are they free to develop the impact desired. The very shading of the carnation in green is intended as an effective provocation aimed at prevailing academic opinion. The preference for pure, unadulterated colors is a distinguishing characteristic of work by artists in ‘Die Brücke’. Complementary colors are juxtaposed in order to deepen expression, a particular concern of the Expressionists. This fine drawing is, therefore, not just superlatively successful because the essence of a standing female nude has been distilled in space but also because it represents the ‘Brücke’ agenda and documents what the artists in this group wanted to set in motion.
In 1911 Kirchner moved to Berlin. Here Kirchner discovered new motifs - city and street scenes. He painted them in a simplified manner, with sharply contoured forms, expressive features and clashing colors. The city paintings became incunables of Expressionism and made Kirchner one of the most important German artists of the 20th century. In 1917 Kirchner settled in Frauenkirch near Davos. The city scenes were now replaced by mountain landscapes and scenes of rural life. In 1923 Kirchner moved to the ‚Haus auf dem Wildboden' at the entrance of the Sertig Valley where he lived and worked until he committed suicide in 1938. [KD] 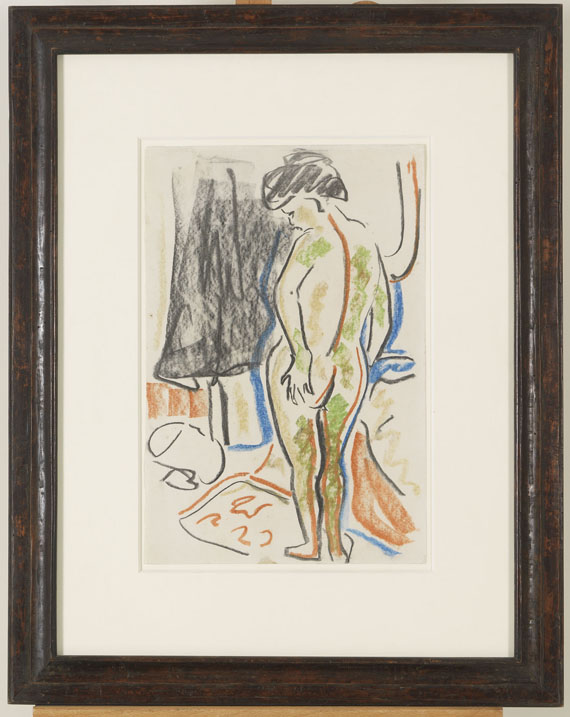