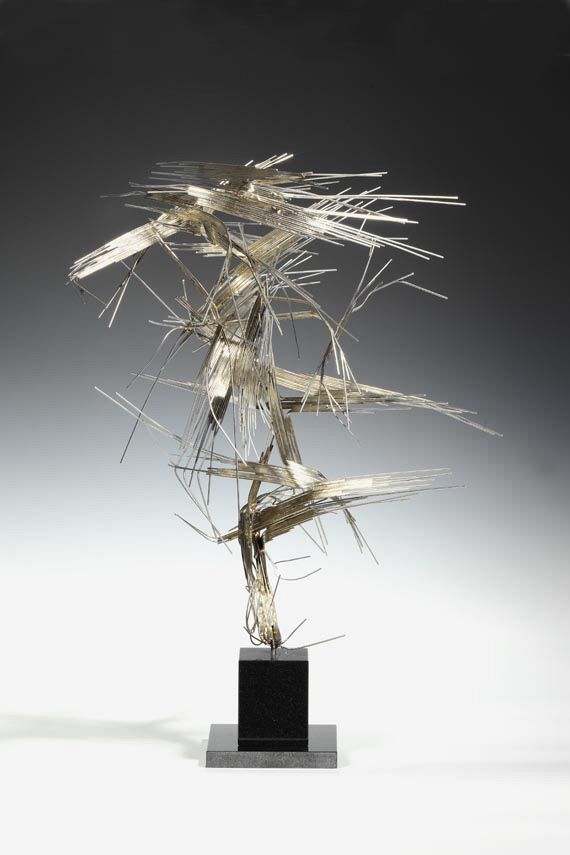 We are grateful to Ms Sabine Kricke-Güse for the kind help in cataloguing this lot in terms of the object's authenticity.

Born in Düsseldorf on 30 November 1992, Norbert Kricke trained under Richard Scheibe at the Hochschule für Bildende Künste in Berlin and freelanced in the city of his birth from 1947. Kricke had his first solo show in 1953 at Galerie Ophir in Munich. In 1956 he collaborated with the British art critic John Anthony Thwaites on expounding his ideas on dealing with “Forms of Water” in design. A year later Kricke, along with Robert Adams and Yves Klein won the Wettbewerb zur künstlerischen Gestaltung [Competition for Artistic Design] held by the Neues Stadttheater in Gelsenkirchen. In addition, Kricke was represented at the Salon des Réalités Nouvelles in Paris. From 1955 Kricke received public commissions from Germany and abroad, for instance, for a large spatial sculpture at the new opera house in Münster (1955/56), designing the new Staatstheater in Gelsenkirchen (1957), designing the water courses in connection with the architecture of the new university in Baghdad (in collaboration with Walter Gropius, 1959) and the large spatial sculpture in front of the Los Angeles County Museum of Art (1965).
From the late 1940s Norbert Kricke used his sculpture as a vehicle for intensively experiencing space and time. The artist designed his delicate, seemingly weightless spatial sculptures of metal rods that are welded together and bunched at the centre to spike out into space on all sides. In his brilliant 1950s and 1960s one-offs, Kricke reverted to the achievements of Constructivist and Futurist sculpture, developing from it an abstract dynamic language of forms that is distinctively his own. Since Kricke was one of the most important exponents of Informel sculpture in Germany, his work has not only been shown at several documentas. It has also been exhibited to international acclaim at the 32nd Venice and the Museum of Modern Art in New York.
Appointed professor of sculpture at the Staatliche Kunstakademie Düsseldorf in 1964, Norbert Kricke became director of the Düsseldorf Art Academy in 1972 and held that post for ten years. Norbert Kricke died in his native city on 26 June 1984. [JS].