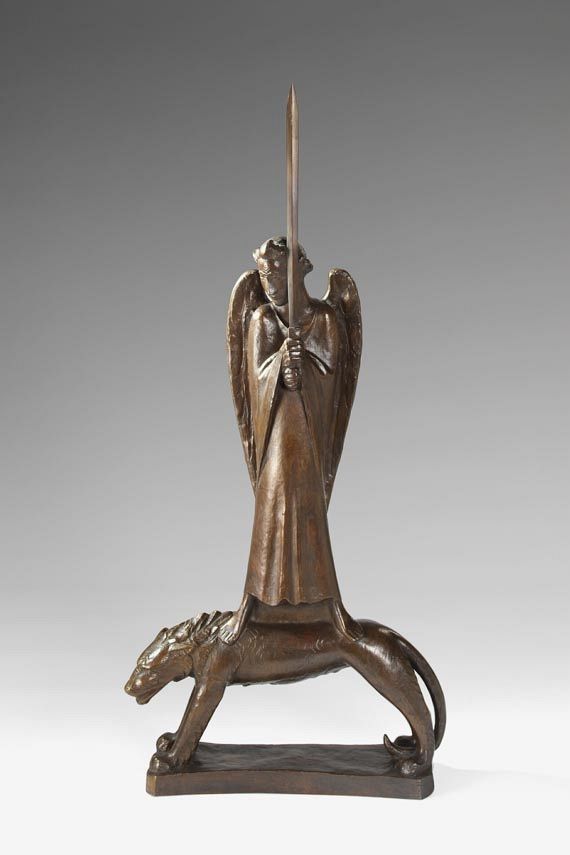 This is presumably one of the two casts made in the artist's lifetime in 1937, according to the kind information of the Ernst Barlach licence administration.

The north German sculptor and printmaker Ernst Barlach began his training in Hamburg, where he attended a trade school from 1888. He studied from 1891 at the Dresden Academy, where he continued his training in sculpture. Barlach’s academic training was consolidated by stays in Paris for study in 1895 and 1897. A trip Barlach took to Russia in 1906 would exert a lasting formative influence on his work. From then on, his impressions of Russian vernacular art would be distilled into the powerfully folkloric style of his sculpture. In 1910 Barlach settled in Güstrow. He had his first exhibition at Paul Cassirer’s gallery in Berlin in 1917. By 1919 Barlach had been accepted as a full member of the Prussian Academy of Arts in Berlin.
Taking up a commission from the city of Kiel, for which he had already created a monument honouring the war dead, Ernst Barlach began doing sketches as designs for the “Spirit Fighter” set up outside St Nicholas’. On the thinking behind this bronze statue that figures so prominently in Barlach’s œuvre, Elisabeth Laur writes: “Even though the figure group is oriented towards medieval representations of St Michael, Barlach has depicted neither hand-to-hand combat nor a triumphant victor. The sword is not actively turned against the animal. The angel’s pose in fact suggests that it is hovering over the animal’s back; yet it appears unstable at the same time, at least hardly as the pose of a dominant figure. The animal is subordinate to the ‘Fighter’ and its head is submissively lowered. Nevertheless, it is necessary in its function as a support; neither of the two figures can stand alone. Hence the group cannot be interpreted unequivocally as the battle of good against evil. It reflects the idea of two irreconcilable principles confronting each other [...]” (Laur, p. 36). The astringent aesthetic of this composition consists, on the one hand, in its monumentality, which is just as apparent in the replica on a small scale, and the balance achieved in its sculptural elements. Beginning with the legs of the animal and on over the angel’s feet to the tip of the sword, Barlach has created an intellectual focus that is echoed in the proportions of the sculpture.
In 1933 Barlach was still in a position to be awarded the Pour le mérit\b\ul e decoration. Only four years later, however, his works were systematically removed from museums, churches and public spaces. Today Ernst Barlach is acclaimed as one of the most important Classical Modern sculptors. Outstanding examples of his Expressionist figures in wood and bronze are on view in Güstrow Cathedral, in St Elisabeth’s in Marburg and at the Berlin Nationalgalerie. Barlach’s studio and house in Güstrow are today open to the public as a museum. [KD].

In good condition. At the top of the sword with a tiny rubbing mark.