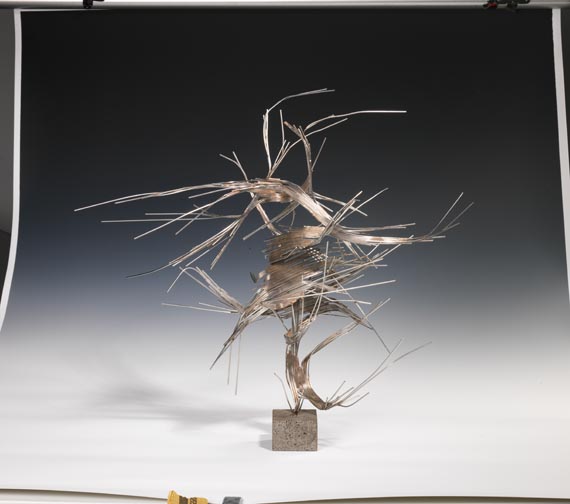 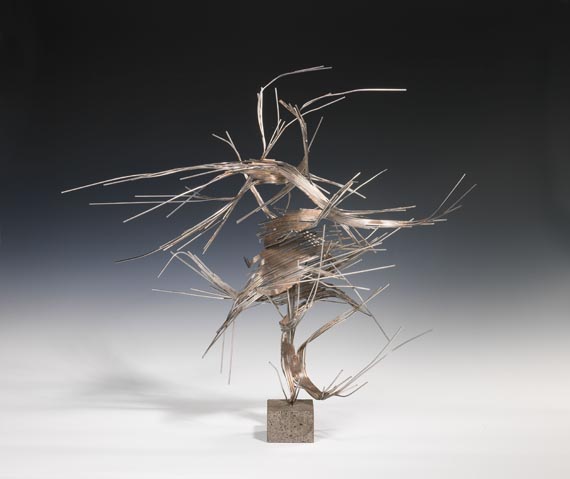 Norbert Kricke was born in Düsseldorf on 30 November 1922. After 1947 - following his studies with Richard Schreibe at the Hochschule für Bildende Künste in Berlin - Kricke established himself as a freelance artist in his hometown. Towards the end of the 1940s he produced his first sculptures made of welded metal rods. In 1953 Kricke‘s first solo exhibition took place at the Galerie Ophir in Munich. In 1956 he collaborated with John Anthony Thwaites on a draft of their theories called 'Forms of Water'. In the following year Kricke was awarded the 'Wettbewerb zur künstlerischen Gestaltung' of the Neue Stadttheater Gelsenkirchen. At the same time he took part in the 'Salon des Réalités Nouvelles' in Paris. As from 1955, Kricke received international public commissions, i.e., for a large sculpture for the new opera building in Münster (1955/56), the design for the new state theatre in Gelsenkirchen (1957) and, in collaboration with Walter Gropius, the water lay-out for the new university building in Baghdad (1959) as well as the large sculpture in front of the County Museum of Art, Los Angeles (1964).

Kricke’s sculptures, with which the artist achieves to visualize abstract categories of space and time, seem agravic and fragile Bundles of welded metal rods that narrow to capillary ramifications dynamically reach out into space. Kricke’s shiny creations fill the room like rays of light – and thus simulate expansion and motion. In his unique pieces Kricke combines the traditions of Constructivist and Futurist plastics and creates an unmatched style of a silent beauty. As one of the most important German representatives of informal art, Kricke’s oeuvre is not only presented on the documenta several times, but also attained international recognition as early as in the 1960s, by participating in, among others, the 32nd Venice Biennale or in the Museum of Modern Art in New York.

In 1964 he accepted a chair for sculpting and in 1972 the directorship of the Staatliche Kunstakademie Düsseldorf, a post he held for ten years. Norbert Kricke died in his hometown on 26 June 1984. [JS].