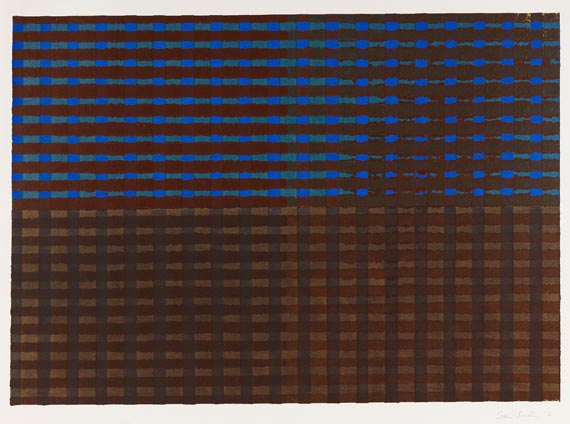 The painter and illustrator Sean Scully was born in Dublin on 30 June, 1945. Scully's family moved to London in 1949. The artist attended the Croyden College of Art from 1965-1968. Then he studied painting in Newcastle between 1968 and 1972, followed by two years at Harvard University in the USA. In 1975 the painter was offered a teaching position at Princeton where he gave lectures until 1983.

The stripe has been an infinite and variable sign in the artistic work of Sean Scully from the beginning on: "The stripe is neutral and boring, which makes it perfect for interpretation." (translation of quote after: Kritisches Lexikon der Gegenwartskunst, München 2001, p. 3). Thus the stripe becomes a dominating motif, applied in all techniques, in Scully‘s artistic creation. Executed in oil, watercolors, pastel and etching, lines, stripes and ribbons are arranged in vertical and horizontal color blocks, at times alternatingly arranged, at times entwined and in varying constellations. Two scholarships enable Scully to travel to the USA and to enlarge his European horizon by an American perspective. In 1975 the artist settled in New York for good. In these days he replaced the colorful supergrids by dark tones, he narrowed the stripes, abandoned diagonals and meshes of orthogonally arranged stripes. This work is exemplary of the development, the choice of mixed colors on top of one another is brilliant, the fuzziness of outlines and contours attenuates the strictness of the self-imposed system.

At the end of this period Scully received US citizenship. The artist was nominated for the renowned British Turner Prize in 1989 and 1993. Scully has given painting classes at the Academy of Fine Arts in Munich since 2002. His works combine European painting traditions with aesthetic experiences rooted in New York. Scully is a member of the Irish Academy of Arts. He worked in New York, Barcelona and Mooseurach/Deutschland. [SM].