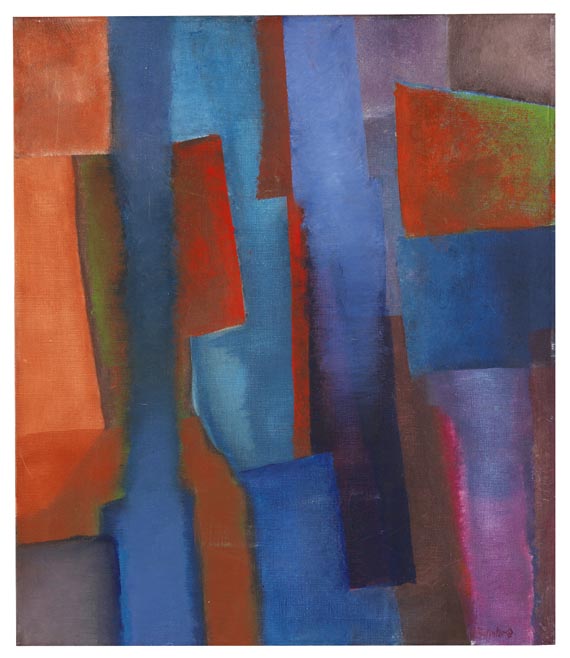 Fritz Winter was born as the first of eight children in Altenbögge near Unna on 22 September 1905. In 1919 he began an apprenticeship as an electrician and worked as a miner. At the beginning of the 1920s he made his first attempts in drawing and painting. In 1927 he applied successfully to the Bauhaus in Dessau, where he studied for three years under Klee, Kandinsky and Schlemmer. In 1929 Winter participated in the exhibition 'Junge Bauhausmaler'. He got acquainted with Ernst Ludwig and Erna Kirchner, whom he visited repeatedly in Davos. After his studies Winter taught at the ‘Pädagogische Akademie’ in Halle. In 1933 he moved to Munich and in 1935 to Dießen on the Ammersee. The National Socialists declared his art 'degenerate' and banned him from exhibiting his works. Winter was drafted in 1939 and sent to the eastern front. He was captured by the Russians shortly before the end of the war and not released until 1949. During the war he drew the so-called 'Feldskizzen' in small sketchbooks, which prepared his famous series 'Triebkräfte der Erde'. Immediately after his return Fritz Winter was co-founder of the group 'Zen 49' and soon joined the European avant-garde movement. Elaborating his works of the 1930s, which were made under the influence of the Bauhaus, Winter developed his own pictorial language, which set him apart from the Informel. In 1955 Winter began teaching at the Landeskunstschule in Hamburg and two years later he was appointed professor at the ‘Staatliche Hochschule für Bildende Künste‘ in Kassel. In the same year, and again in 1959, he exhibited at the documenta I and II.

In the 1960s Fritz Winter preferred a painting style that sought its tension in the dualism of two dominating colors. His color fields are homogeneous in themselves. They correspond with neighboring zones over borders. In this context Lohberg mentions analog constitutive criteria of Ernst Wilhelm Nay and Serge Poliakoff. However, Winter does not abandon the composition scheme he has gained. His colors act on various levels. Their touch is merely feigned. In 'Blau zwischen Rot' it is the differentiated shades of blue that enter a tenseful dialog with the rust-colored background and the shades of purple. And yet, a contemplative silence cam also be observed. Nuances have been broken, they do not directly impact the observer. The overall canon of colors seems balanced. Winter‘s aspiration to see the composition as a whole makes for the balance between the dialog of two colors on the one hand and an integration into an overall harmony.

On the occasion of his 60th birthday, the artist was honored with large retrospectives in several German cities. He received the 'Großes Bundesverdienstkreuz' (Great Federal Cross of Merit) in 1969. He retired from his chair in Kassel in 1970 and returned to Diessen on the Ammersee. A Fritz-Winter-House was opened in Ahlen in 1975. Fritz Winter died on 1 October 1976. Even before his death Winter was considered one of the most famous German post-war artists. [SM].