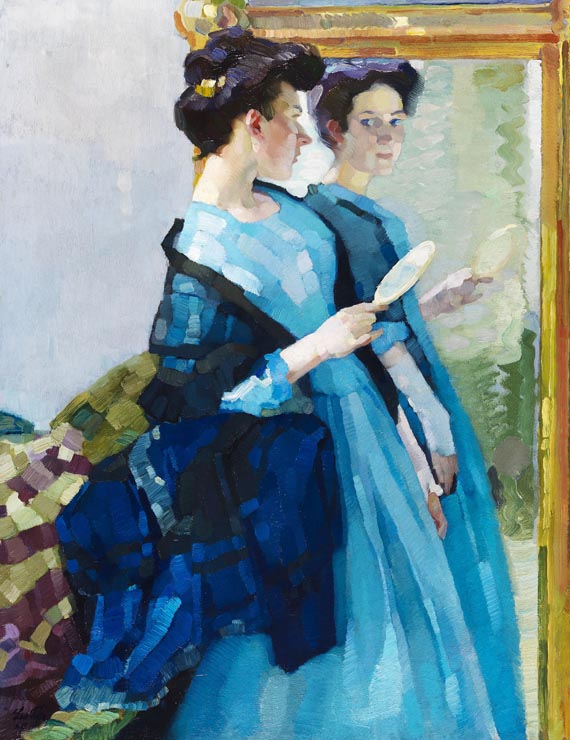 Against his fathers wish Putz moved to Munich at the age of 16, to take first drawing lessons under his stepbrother Prof. Robert Poetzelberger. He then studied fine arts first at the Akademie in Munich and then, from 1891 to 1892, at the Académie Julian in Paris under Adolphe Bouguereau and Benjamin Constant. After returning from Paris Putz attended the studio class of the genre painter Paul Höcker. The Munich Secession was founded in 1892 and Putz frequently exhibited at the annual exhibition. A few years later, in 1899, Höcker's studio class founded the artist group "Scholle". Putz was one of its founding members. The group confronted the predominant academic style and Historicism with a new, temperamental painting style, which was influenced by Wilhelm Trübner. The central subject was the depiction of people, mainly women.

In 1908/09, a little after the turn of the century, the two versions of the Lady in Blue were made, one of them is this work with the title "Spiegelbild" (Mirror Image). The catalog raisonné of paintings points out to the monography by Wilhelm Michel, who mentions two other versions of the subject, for which, however, there is no proof.
The mirror image and its visual ambiguity can be found in art as early as in late Renaissance. Artists often used it covertly to depict themselves. Later the meaning was taken to the whole image area. Two views of the portrayed person appear, one seemingly real and a virtual one. Putz makes full use of the theme, by endowing the mirror image with so much lovely charm, that her real counterpart is almost astonished by that. Entirely fallen to the fascination of the blue robe, Leo Putz pays tribute in this illustration to beauty itself by applying all his brilliant technical means. The striking composition combined with the glaze of the broad-mannered painting technique adds a very special appeal to the subject. An appeal that is characteristic of Leo Putz’s paintings from before World War I.

Putz and his family returned to Gauting in Bavaria in 1923 when he was honored with an honorary membership of the Bayerische Akademie der Schönen Künste (Bavarian Academy of Fine Arts). In 1929 Putz travelled to São Paulo, his first trip overseas. He and his family spent the following years in South America, travelling to Buenos Aires, Argentina and to the jungle in Bahia. His work was recognized in Mexico with an honorary professorship at the Escola Nacional de Bellas Artes in Rio. The time spent in South America had a significant influence on Putz' painting: southern landscapes and people populate his works, the palette is bright and colorful. In 1933 Putz once again returned to Gauting with his family. While he was honored with a large exhibition at the Künstlerverein (Artist Society), Putz still felt the need to flee from the National Socialists as they prohibited him to continue painting in 1937 and dissolved the Secession and all artist groups in Munich in 1938. Leo Putz died on 21 July 1940 in his exile in Meran. He was buried in Gauting. [KD].