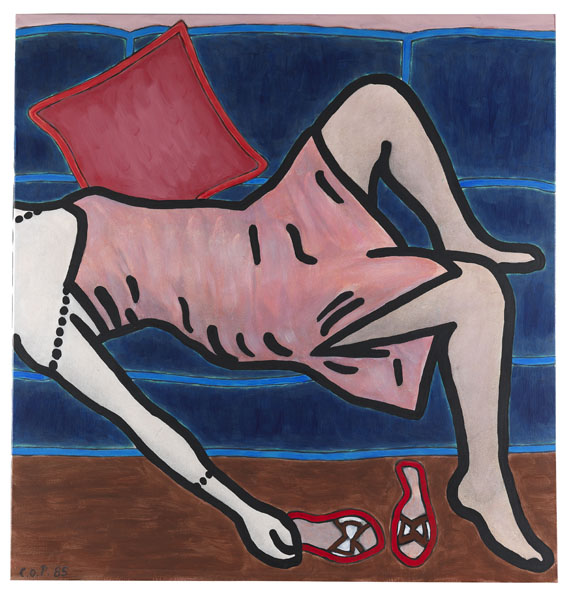 As early as in the 70s Paeffgen made the first so-called "Umrandungen" (Borders). They are photos that have been digitally transferred to the canvas, with thick black reinforced contours and with rich colors. This way his motifs have an emblematic character and anonymizes the depicted persons. In this work the anonymization is increased by the fact that only the body of the reclined female figure can be seen - her head is literally cut off by the right imager margin. This clearly shows the artist's critical intention: "Paeffgen's discrete contours aim at conservatives which is less referred to by the depicted people - for they have regained their anonymity [..] -, the passive observer is meant, who, from a remote position, wants to see what's going on: [..] through newspaper and magazine or in front of the TV within the own four walls [..]. No changes, no abnormality, no responsibility and no identity. Its the fear of exposure, and they have to fear it, as they know of their self righteous judgement’s rigor." (Poetter, Jochen: Die diskreten Konturen des C.O. Paeffgen, in: ex. cat. C.O. Paeffgen, Staatliche Kunsthalle Baden-Baden, 2 May - 7 June 1987, no p.).