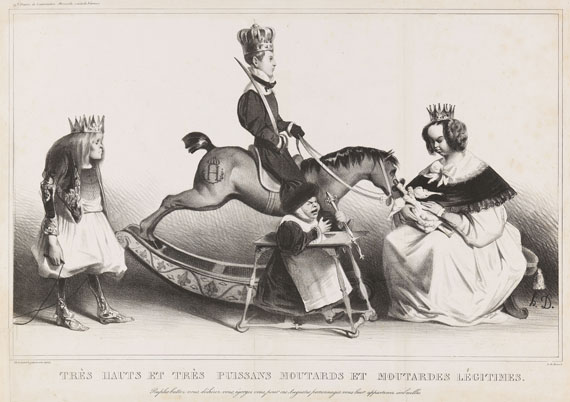 This sheet was made following the wish of Charles Philipons, publisher of the satirical magazine “La Caricature“. It illustrates how much the French bourgeoisie hated the royal heirs of the House of Boubon, which was overthrown in the revolution in July 1830. Daumier depicts them as “high-born“, but moronic rowdies with an innate evil character. The text addresses their supporters, the extreme royalists, who would die for these “majesties“ in battle: “High-borns, mighty and legitimate small rascals. – People fight and sacrifice for these royal majesties, you are theirs, idiots!“
Depicted is Henri d'Artois on a rocking horse, the grabdson of French king Karl X., who was overthrown in the Juli revolution and fled to England. Next to him is Otto I., Friedrich Ludwig of Bavaria (1815-1867) and Victoria I. (1819-1901) of England as well as Franz-Joseph I. (1830-1916), the later emperor of Austria in a children’s stool.
In the July revolution of 1830 the House of Bourbon in France was overthrown and Louis-Philipp of Orléans headed the then constitutional monarchy. [CB].