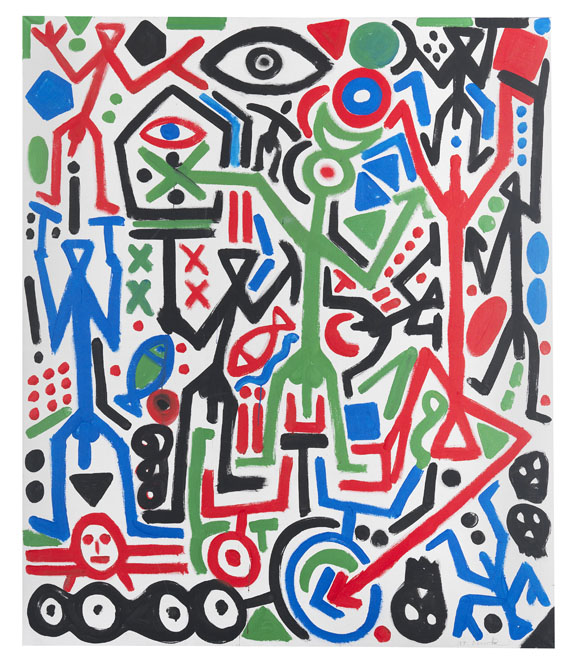 During his artistic period in the former German Democratic Republic (GDR) the artist, originally named Ralf Winkler, adopted several pseudonyms, among which finally 'A. R. Penck' gained widespread acceptance. This chameleon-like change of names was a sly response to the dogmatic cultural and educational policy of the GDR, because works of arts could be easier transferred to the west with various camouflage signatures. Furthermore, the pseudonym Penck refers to the geomorphologist of the same name, whom the artist appreciates and puts in context with his oeuvre. Having finished his apprenticeship as a commercial artist at an advertising agency in Dresden, while teaching himself the fundamentals of painting at the same time, he earned his living as a postman, stoker and night watchman, repeatedly harassed by the cultural authorities of the GDR. In the early 1960s the first pictures were created with those extremely reduced figures reminding of prehistoric symbols, which have marked his style since then. His preoccupation with mathematics, cybernetics and information theory resulted in his 'System und Weltbildern' in the midst of the 1960s. Whereas these pictures and also the 'Standartbilder', which followed from 1968, are characterized by a diagrammatic pattern, his visual range was enlarged in the 1970s by striking color accents and extensive picture formats filled in a complex way. Penck transfered his symbolic repertoire of personal characters to the three dimensional space in form of wooden sculptures, which are also cast in bronze since 1982. In 1980, Penck was expatriated to the Federal Republic of Germany (FRG), which had already acknowledged him as an important artist for a long time. From 1972 Penck was represented at the documenta for several times and in 1984 also at the Biennial in Venice. The artist obtained a professorship at the Akademie der Bildenden Künste in Düsseldorf in 1988.

The stick figures are Penck's trademark, they are often compared with prehistoric cave paintings. This work has a similar effect, strewn with enigmatic pictograms in clear colors. The pictograms are part of a code language the artist developed in 1960 when he was still living in the GDR. This way Penck tried to establish a catalog of signs that allows to depict the current world in a short and precise manner. The artist remains silent about the codes, it has to be decrypted by the observer.

Following his retirement in 2003 Peck moved to Ireland, where he lives and works today. [JG]