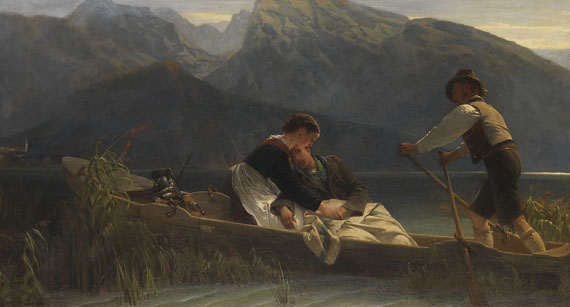 After he had completed his studies at the Städtische Kunstschule in Frankfurt am Main and at the Munich Academy under Karl von Piloty, Karl Raupp traveled to the Chiemsee for the first time in 1869 and visited the Fraueninsel. The region’s landscape and its people inspired the artist so much, that it influenced hid oeuvre decisively, earning him the name "Chiemsee-Raupp". With great poise Raupp combined exact observations of nature, particularly the quickly changing weather on Chiemsee with the lovely genre painting, showing mostly peasant families, fisher- and huntsmen or young couples. Besides being co-founder of the Fraueninsel painter colony, he was also co-publisher of the chronic of Frauenchiemsee artist, released in 1918. In this depiction of the wounded solider returning from combat, Raupp presumably references the Franco-Prussian in 1871, and thus went beyond the mere genre depiction. [CB].