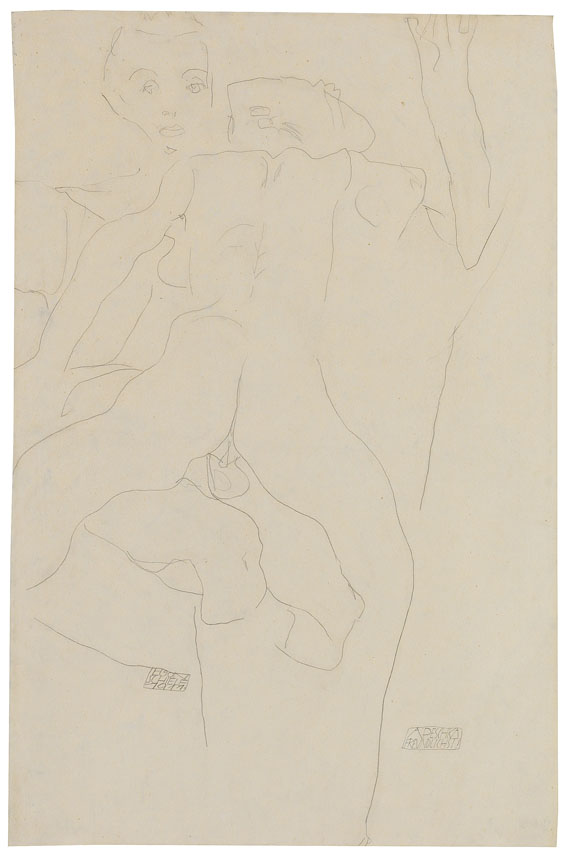 Egon Schiele was born in Tulln on the Danube on 12 June 1890. After the great Klimt-era, Egon Schiele is the painter that strongly influenced the artistic scene of Vienna in the early 20th century. In 1906, the young Schiele entered the class of Christian Griepenkerl, a painter of portraits and historic events at the Wiener Akademie, who was still rooted very much in the traditional disciplines. The imposed studies there, which Schiele practiced only reluctantly, left no significant traces in his personal artistic style. He was rather impressed by the linear, two-dimensional style of Gustav Klimt and the Vienna Secessionists, who spoke out as an artists' group against the stiff academic conventions of the historical school and in favor of a reconciliation of art and life. After Schiele had more and more acquired the creative principles of Gustav Klimt in an act that can be described as a form of rebellion against the dogmatism of his education, his early withdrawal from the academy in 1909 accelerated his striving for his artistic self-realization, which was independent of a painting style that celebrated the aesthetics of the beautiful appearance. He joyfully founded the "Neukunstgruppe" and developed a drawing style that intentionally conjured up the impression of fragility and tension. In an anti-academic and radically subjective manner, Schiele chose perspectives and views in a way that figures, which are only rarely shown head-on or in full length in the picture, appear twisted and deformed by their compositional arrangement. The main motives of these decadently colored representations are self-portraits and portraits, but also nudes that are distinguished by strongly erotic features. These pictures irritated the conventional perception and therefore became early examples of Viennese expressionism.

In 1912, the artist was imprisoned for a short period of time because of his way of painting very young nude models that was thought to be immoral. Schiele then joined the 'Bund Österreichischer Künstler' and worked for the Berlin journal 'Die Aktion' in 1913. In the following year he broke off his relationship with Wally Neuziel, whom he had been attached to for four years, and married Edith Harms. When Schiele was a soldier for two years since 1915, he painted only very few pictures. The painter however continued to take part in very many exhibitions like the ‘Wiener Sezessionsausstellung’, which became a great success in 1918 showing 50 of his works of art. Still in the same year Schiele died only shortly after his wife of a pandemic influenza on 31 October 1918. [KD].