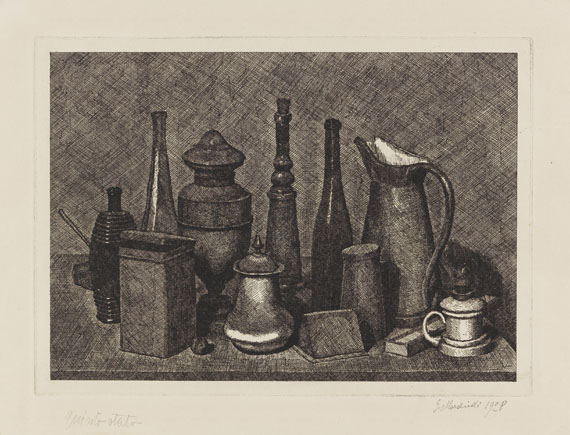 Giorgio Morandi was born in Bologna on 20 July 1890. After working in his father's office, Morandi enrolled at the Bologna Accademia di Belli Arte in 1907. At first successful there, he came into conflict with his teachers during his last two years since he had by then developed his own distinctive formal idiom. Morandi was fascinated at the time by the work of such avant-garde artists as Cézanne, Matisse and Picasso but also had strong leanings towards Italian painting as early as Giotto, which he studied on numerous trips within Italy. In 1913 Morandi completed his formal studies and came into frequent contact with exponents of Italian Futurism, showing work at their exhibitions and making friends among them. In 1914 the city of Bologna hired Morandi to teach art at primary schools in several districts, which he continued to do until 1929. Conscription into the military interrupted Morandi for a time in the pursuit of his career but serious illness soon brought about his discharge from the army. After briefly dabbling in Futurism, Giorgio Morandi became interested in Pittura Metafisica in 1918 on encoutering the work of de Chirico and Carrà. Again Morandi forged close personal ties with the leading artists of a movement which he joined only briefly. In 1920, however, Morandi returned to the work of his favourite Cézanne, eschewed contemporary movements in art and developed a pictorial language of his own for rendering his emotions in visual terms. By now Morandi concentrated on still lifes, which, with landscape, had always been his favourite genre. In continuous repetition and using a subtle palette, he patiently explored the two-dimensional representation of a limited range of three-dimensional forms.

In his still life Giorgio Morandi celebrates a romance of objects that is unmatched. In its density the arrangement of things alone is unusual. No matter how many items Morandi chooses for his still lifes, they always have a close spatial relationship. All decorative accessories are avoided, only the pure physicality of the bottles and cans is the statement of these compositions. In addition, Morandi employs an etching technique that calls reminiscence of copper engraving for the cross-hatching, thus evoking a world of what once was. It is a poetry of the trivial, which is isolated here and, out of its actual sphere, is lifted to a new affiliation. The banality of small objects is canceled in this interaction. The simple object gets a secret magic force that Morandi latently discovered and visualized it in an unusual dense statement.

Morandi's study of printmaking techniques, which he returned to frequently and intensively, brought him an appointment as professor for printmaking at the Bologna Accademia di Belli Arte in 1930, where he taught until 1956, interrupted only by the war years, during which he and his family retired to Grizzana. From 1930, the year before Morandi first showed work at the Venice Biennale, he was showered with prizes at international exhibitions. Morandi's quiet motifs, contemplative concentration on simple plastic forms and his hauntingly delicate and utterly distinctive palette have made his work beloved world-wide. Giorgio Morandi died of lung cancer in Bologna on 18 June 1964. [KD].