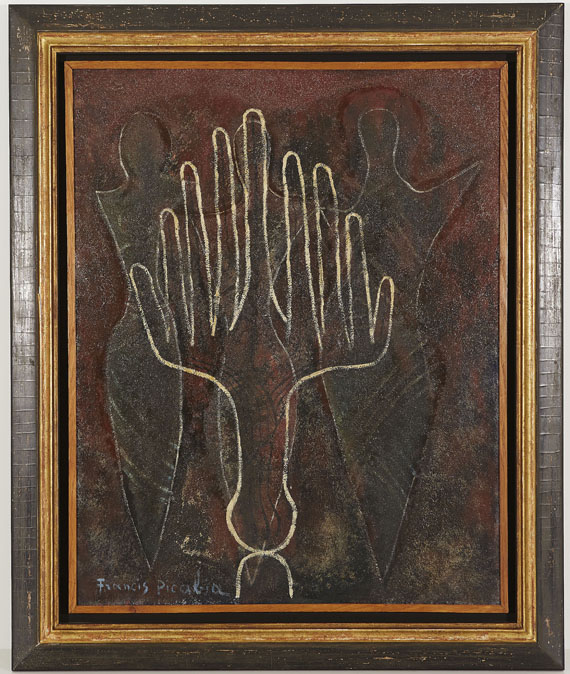 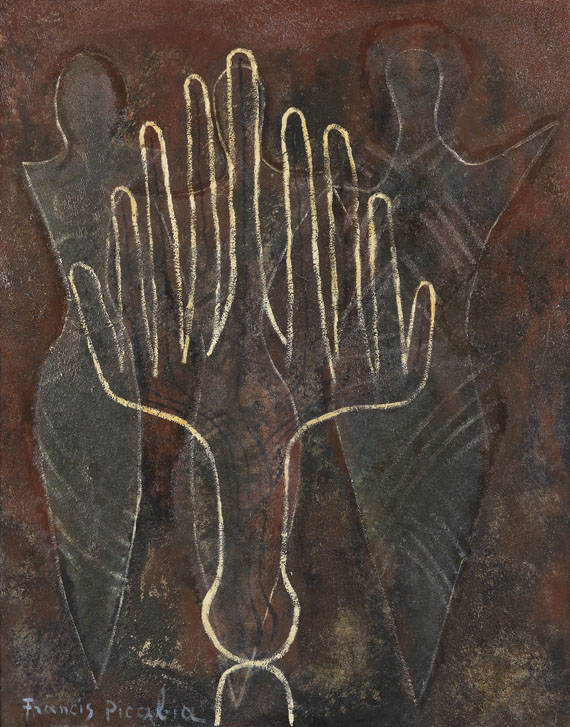 Picabia began studying at the Ecole des Arts Décoratifs in Paris in 1894. Stylistically his work was initially influenced by the School of Barbizon and later, as a result of his acquaintance with Camille Pissarro, by the Impressionists. His first one-man exhibition with sixty one landscapes took place in 1905 at the Galerie Haussmann in Paris. Picabia became interested in Fauvism and Cubism in 1909. He made friends with Marcel Duchamp and sought the acquaintance of Apollinaire, Delaunay, Kupka and Léger. He exhibited works in the group exhibition 'Section d'Or', a show of the most important artists of Cubism, in 1912. The painting technique, which Picabia also used from 1912, was named 'Orphism' by Apollinaire. Picabia travelled to New York several times between 1913 and 1917, where he met Man Ray and Alfred Stieglitz and made his ironic paintings and drawings of machines which were inspired by his friend Duchamp. His thoughts are further illustrated in the 'Poémes et dessins de la fille née sans mère'. Picabia's Dadaist poetry and literary involvement made him one of the most aggressive and nihilist members of Dadaism. He published the Dadaist journal '391' until 1924, while also writing for Tristan Tzara's Zurich DADA journal. The latter invited Picabia to join the Swiss Dada group in 1918 and, after his return to Paris in 1919, he became an important link between the Dada movements in Paris and Zurich. In 1924 Picabia associated with the Surrealists, a movement which had been founded by Bréton. Picabia moved to Mougins in Southern France in 1926 and began making his material paintings as well as the so-called 'monster paintings', using aggressive, bright colors. Towards the end of the 1920s Picabia began with his 'transparencies' - several transparent layers of paint, one on-top of the other, which create an impression of depth - which were inspired by Romanesque frescos. During the 1940s his inexhaustible repertoire of ideas produced depictions of nudes which were partly copied from erotic magazines.

Picabia returned to Paris in 1945 and the influence of Matta, Soulages and Hartung led him to abstraction anew. It was the ferocities of World War II as well as a cerebral hemorrhage he had sudffered in 1944 that made for a turning point which would coin Picabia's work fundamentally henceforth. As it is the case with this work, for instance, the artist developed an existential pictorial language. Ideographic signs and archaic symbols are at its core, they overlap several levels of represenation and enter in a semantic correlation with one another. These subtle creations offer a variety of emotional associations and ways of interpretation, accordingly, they are among the artist's most sought-after works.

When Picabia returned to Paris in 1945, his encounter with Matta, Soulages and Hartung led him back to abstract art. His new 'dot pictures' - metaphors of germ cells, plant elements and phalli were exhibited at the Galerie Deux Iles. The worsening effects of arteriosclerosis and a stroke ended Picabia's career and the artist died on 30 November 1953 in Paris. [KP/JS].