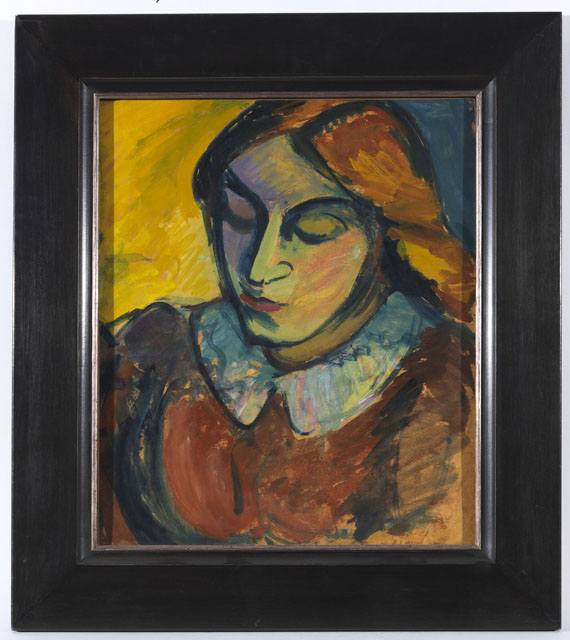 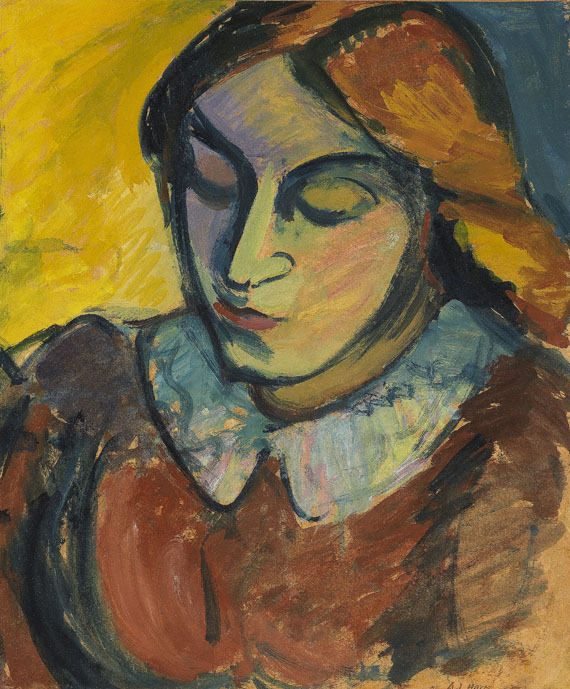 Accompanied by a confirmation issued by Simone Lhote from 10 July, 1965 (in copy, rear of a photo confirmation).

André Lhote was born on 5 July 1885 in Bordeaux, where he learnt wood carving at the age of thirteen in the workshop of a furniture maker. He entered the Ecole des Beaux-Arts shortly afterwards to begin studying sculpture. When he left his parents' house in 1905 in order to move into his own studio he intended to concentrate his efforts in painting, a passion which he had taught himself from the beginning of his studies. That he was very talented in this genre is proven by the fact that he presented his works in a first one-man exhibition at Druet in 1910 - four years after having moved to Paris.

In this remarkable portrait of a woman André Lhote's early conception of pre-cubist style becomes obvious. The artist, who was also active as art critic at a later point, was deeply impressed by a Cezanne exhibition in 1907. In his own works he took a path of formal simplification by maintaining a fauvistis coloring. This is also reflected in this portrait, which is characterized by unusual color values and clearly drawn forms. André Lhote does not make Cubism's final step, that is the decomposition into various levels of representation. The plastically scarce outlined illustration of a female face, which appears as if carved in stone, calls reminiscence of Picasso's form findings.

He was not only interested in the practical experience, however, but also in the theory of painting and co-founded the journal 'Nouvelle Revue Française' in which he published his theoretic views until 1940. The artist joined the artist society 'Section d'Or' in 1912 and associated himself with Cubism. His work was interrupted for three years at the outbreak of the war when he was drafted into military service. In 1918 Lhote managed to realise his plan of opening his own painting school in Paris. His theoretic ideas attracted a wide audience from the 1920s during numerous lectures in France and abroad. Lhote bought an old house in Gordes in 1938 where he, his wife and the painter Chagall experienced the outbreak of the war together. The couple remained here until 1942 when they returned to Paris where Lhote wanted to continue teaching at his painting school. After the end of the war Lhote set out on a lecture tour to Belgium, England, Italy and , in 1950, for the first time also Egypt, where he returned in the following year to lecture at the art academy in Cairo. In 1952 his lectures also took him to Rio de Janeiro, Sao Paulo, Bel Horizonte and Bahia. After returning to Paris he lectured about Egyptian art in the Valley of the Kings. His work was awarded with the Grand Prix National de Peinture in 1955. The UNESCO commission for sculpture appointed Lhote president of the 'International Association of Painters, Engravers and Sculptors'. Numerous international exhibitions, like a retrospective exhibition at the Musée d'Art Moderne in 1957, honoured the painter and critic's oeuvre. [EH]