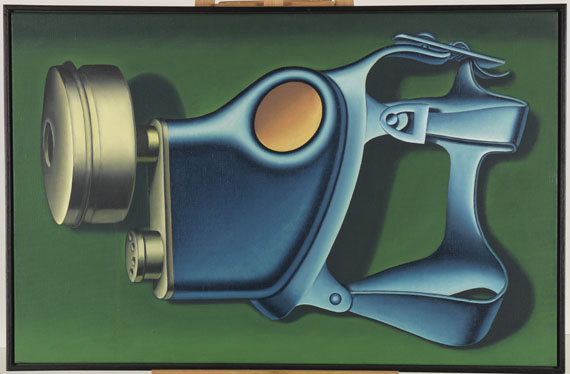 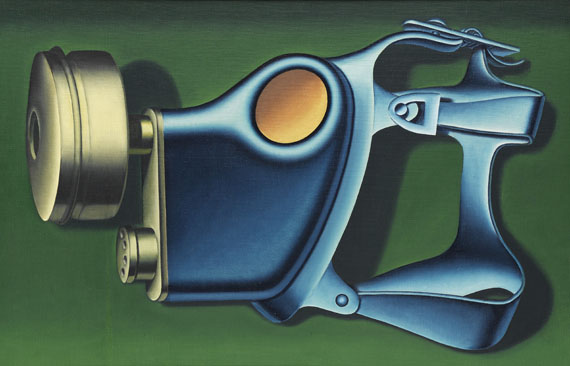 Born on 10 February 1935 in Düsseldorf, Konrad Klapheck attended higher secondary school for classical languages and literature before studying painting between 1954-58 at the Düsseldorf Art Academy. His teacher there was Bruno Goller, who is best known for symbolically alienated representations of utilitarian objects from everyday life and supported Klapheck's interest in this theme. Studying Surrealism early on, Klapheck had visited Max Ernst by 1954. He spent five months in Paris in 1956-57 and from 1961 maintained close ties with the Paris Surrealists around André Breton. In 1955, when Informel was at its height in Germany, Klapheck painted 'Schreibmaschine' ['Typewriter'], in which a typewriter is depicted with exaggerated realism against a simple background. In the years that followed, Klapheck continued to paint in the Superrealist manner, thus heightening the objects he represented to a menacing monumentality. His works convey an impression of extremely smooth surfaces. Apart from the paintings, prints began to take an important position in Klapheck's work in the late 1970s. During that time he worked with the Frielinghaus Printing Workshop in Hamburg.

'With the aid of my machine pictures I could, without trying, revisit the past and come to terms with the difficulties I was then experiencing in my own life. Beneath every successful picture lay another picture, one that could only be inferred, which gave meaning to what was happening on the surface. I decided to build up an entire system from machine themes and to tell my autobiography through them.' (Konrad Klapheck).

In 1979 Klapheck became professor at the Düsseldorf Art Academy, where he still teaches. Widely acclaimed, Klapheck's work has been shown at retrospectives and acquired by important museums.