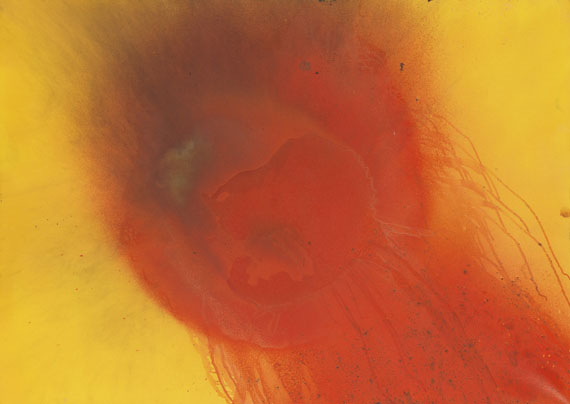 • Work in intensive colors from the artist‘s late period of creation
• Large-size work with a strong and vivid presence.

"The picture is a force field, arena of the author's energies, molten, poured in the motion of color, received from the universe's infinity, guided into the capuillaries of the observer's soul."
Otto Piene, quote from: Kritisches Lexikon der Gegenwartskunst, p. 2.

Essay
Otto Piene, the great "ZERO" visionary, left behind a distinguished late body of work, which is also represented at the Kunstmuseum in Celle. Our work "Echo (Jupiter) II" was also made during this mature period. Emerging from the primal element fire, it shows the importance of the sky in Piene‘s creation: Firmament and space, both in constant motion and change, abound with energy and elementary force, are models of his art. Accordingly, our work also has a circular burn in the middle that seems like a celestial body. Shooting like the burning tail of a comet, the structure is about to collide, in a state of transition between two energetic levels.A strong red and a dynamic yellow underline the explosive force of this composition. Piene‘s famous fire technique once more leads to an ever new and fascinating figuration in this work. Borne by the transformative energy of fire, color and controlled coincidence, the artist created a work that is characterized by concentrated power and poetic beauty – elemental in the truest sense of the word.
More Information
+
Sell
Would you like to sell a similar object?
+
Register for
Otto Piene
+
Preview & Auction Procedure
+
Bidding Options
+
Bid by telephon / written
+
Buying from A-Z
+
Catalogue Order
+
Contact a specialist
+
Otto Piene Biography
Share 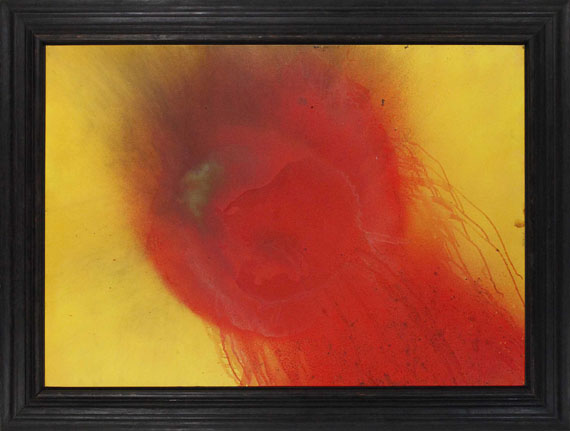