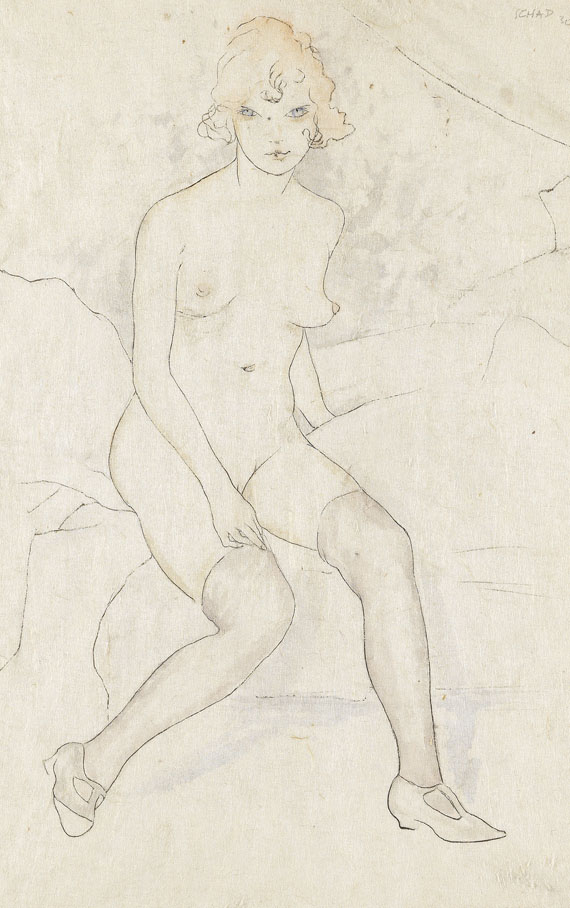 Soft drawing with wash watercolors from the artist's best period of creations.
The drawing has been included into the register of the Christian Schad Archive, Rottach-Egern.

Christian Schad was born in Miesbach, Upper Bavaria, on 21 August 1894. A passion for both art and music - he played the violin - forced him while still a schoolboy to chose between them. In 1912 Christian Schad left higher secondary school and opted for painting. At the Munich Art Academy he started out in Heinrich von Zügel's painting class but changed after a semester to Becker-Gundahl's class in drawing from the nude. At that time Schad met Georg Schrimpf and Ernst Moritz Engert. Christian Schad managed to simulate a heart problem in order to avoid military service. Furnished with a medical certificate, Schad went to Zurich but not before he had shown his early work at the Munich Secession in spring 1915. In Zurich Schad became acquainted with Walter Serner, who would remain a close friend throughout his career. In October 1915 Serner and Schad published 'Sirius, eine Monatsschrift für Literatur and Kunst' ['Sirius, A Monthly Magazine for Literature and Art'], which was forced to cease publication the following year after only seven issues. Schad did the advertising posters and designed a full-page woodcut for each issue of 'Sirius'. In 1915 Christian Schad had his first show at the Salon Wolfsberg and published a portfolio of ten woodcuts, 'Christian Schad', at the Sirius press. Schad's painting at the time reveals his preoccupation with Futurism, Cubism, monochrome painting and, later, Expressionism. In November 1916 Christian Schad moved to Geneva to join the Dada movement while Serner remained in Zurich. In addition to printmaking and painting, Schad experimented from 1919 with what he called Schadographs (photography without a camera or lenses). Via these two-dimensional works Schad arrived at his first abstract, three-dimensional wood reliefs in 1919/20. Abandoning Dada in 1920, Schad turned to painting his first realistic pictures. In 1923 Schad married Marcella Arcangeli, a native of Rome, and their son Niklaus was born in 1924. Schad produced his first New Objectivity pictures in his Naples studio in 1923. Moving to Vienna and a larger studio, Schad separated from his wife in 1927 and spent most of his time in Berlin. In the early 1930s Schad had financial difficulties and became isolated.

When the National Socialists came to power in 1933, Schad found it increasingly difficult to work as a freelance painter. The premonition of war shows up ever more clearly in the work Schad did in the late 1930s. To ensure a financial basis for his work, Schad took over a Bavarian brewery in 1935. From 1941 he again received commissions for portraits. In 1942 he moved to Aschaffenburg and married Bettina Mittelstädt. He worked as a cultural critic and for the theatre. From 1954 Schad returned to Expressionist painting but Schadography dominated his late work. In the early 1960s Christian Schad's New Objectivity work was rediscovered and he addressed himself to Magic Realism. Christian Schad died in Stuttgart on 25 February 1982. 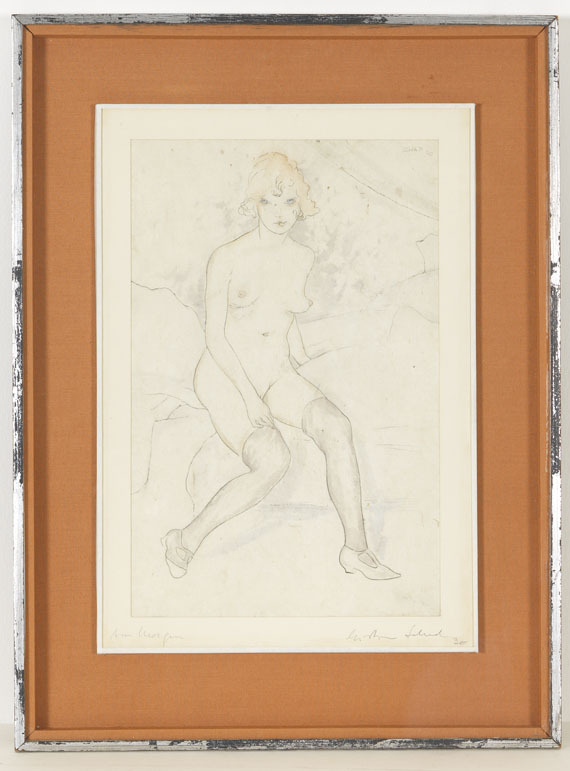