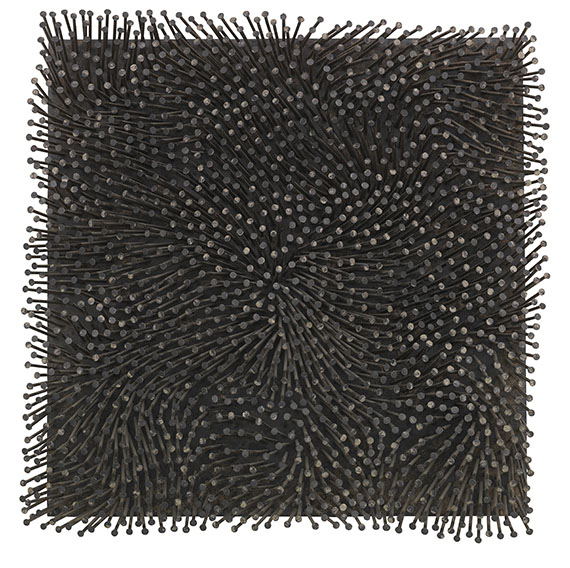 Essay
The famous "Felder" are among Uecker's most sought-after nail pictures. Our both powerful and yet contemplative work "Dunkles Feld" from 1980 is a prime example from this work group: The nails are not arranged in a strictly symmetrical order, instead the artist was guided by instinct, the nails find their position on the canvas-coated wood like in a rush. Dynamic motion captures the rigid iron, creating a primal swirl remote from time on the squared image surface. A mystic force seems to guide the nails' gradients, mysteriously arranged by spiritual forces, they look like iron filings on a magnetic field. The deep blackness of "Dunkles Feld" seems like a magnet itself, capturing the observer's eye with an almost cosmic force, leading him to meditative insight - puristic aesthetics with a remarkable suggestive power
More Information
+
Sell
Would you like to sell a similar object?
+
Register for
Günther Uecker
+
Buying from A-Z
+
Contact a specialist
+
Günther Uecker Biography
Share