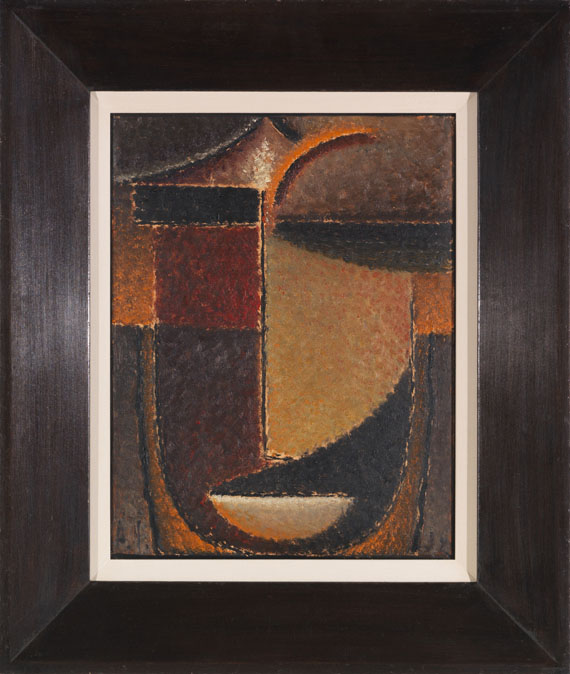 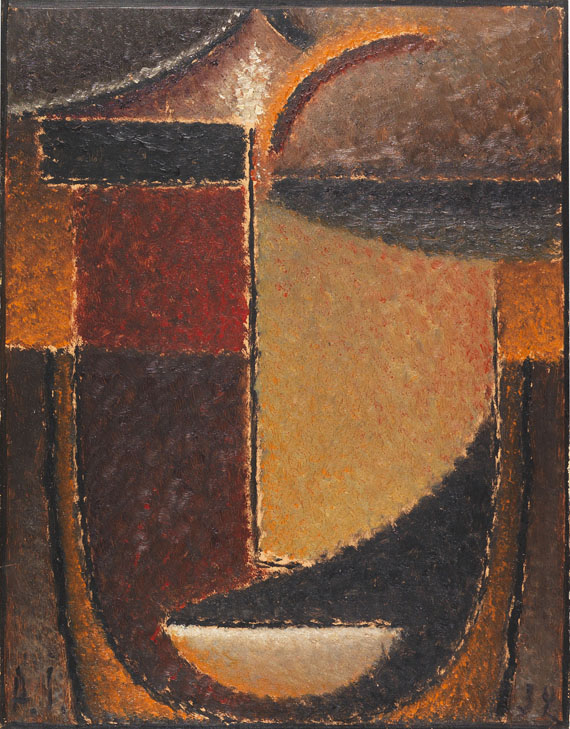 LITERATURE: Clemens Weiler. Alexej Jawlensky, Cologne 1959, p. 254, no. 369 with illu.
"Finding the right form for the face was crucial to me. I had realized that great art could only be made with deeply religious feelings, which I could only express through the hman face. I understood that artists express theri inner divinity tthrough forms and colors, This is why God is visible in the artwork and art is the longiong for God."
A.v.Jawlensky quote in Alexej Jawlensky, Gal. Wittrock, 1986, p.12

The pictorial achievements of Alexej Jawlensky made were largely realized through portraits. Initially in a realistic Post-Impressionism, soon followed by an Expressionism characterized by intense colors, he eventually attained the calm paths of a contemplative painting of the supernatural and spiritual, of which the Meditations are the most remarkable documents. It is the same motif of an abstract head following a pictorial scheme in surface and contour, which Jawlensky takes to visual perfection in a selective examination of the spiritual. By making ever new approaches to reveal the face behind the portrait - the icon – Jawlensky created one-of-a-kind documents of the exploration of the spiritual and abstract, these accomplishments are inimitable in the history of art in the first half of the 20th century. The observer feels the painter's almost religious immersion in a distanced and subtle manner, calling reminiscence of orthodox icons, in which the schematic spiritual portrait is a visual message of salvation. But Jawlensky goes a step further. Even the variation already shows the actual intention of his artistic occupation with this difficult theme. Jawlensky's Meditations can be understood and internalized under various aspects. One the one hand on basis of their clearly pictorial expression, but also by their spiritual and religious standards, which, to Alexej von Jawlensky, is the key message of his works. [KD]
More Information
+
Sell
Get a free appraisal for a similar object!
+
Register for
Alexej von Jawlensky
+
Buying from A-Z
+
Contact a specialist
+
Alexej von Jawlensky Biography
Share