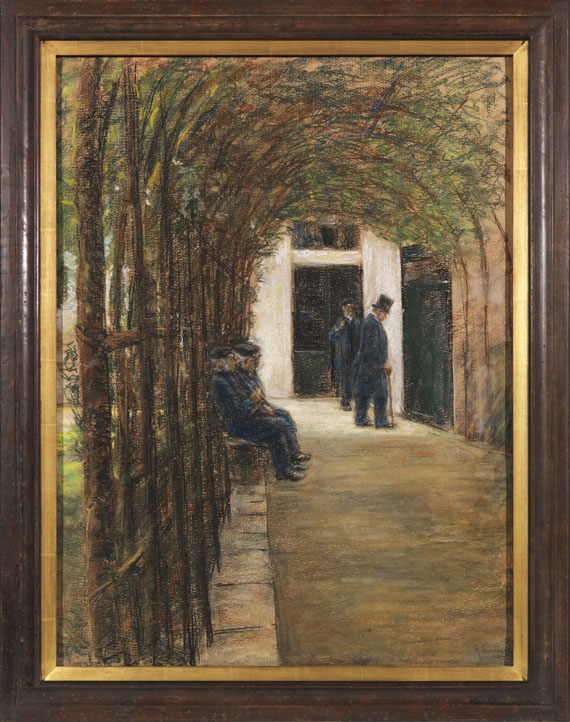 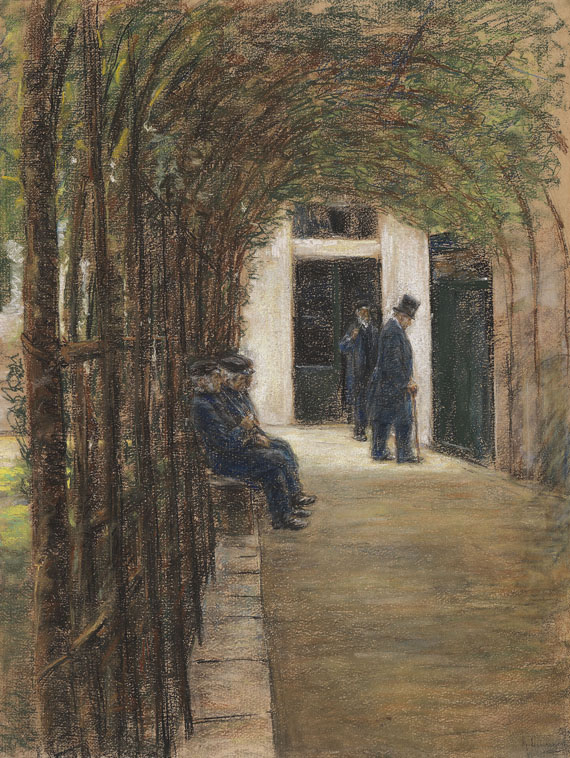 681
Max Liebermann
Altmännerhaus in Amsterdam (Garten im Brentanostift in Amsterdam), Um 1880.
Pastel
Estimate:
€ 60,000 / $ 55,200
Sold:
€ 85,000 / $ 78,200
(incl. 25% surcharge)
Altmännerhaus in Amsterdam (Garten im Brentanostift in Amsterdam). Um 1880.
Color Pastel.
Signed in lower right. On slightly structured paper, laminated on board. 78.5 x 58.5 cm (30.9 x 23 in) , the full sheet.
In 1890 the balanced composition of this pastel served Liebermann as model for the etching "Altmännerhaus" (Schiefler 10).
Very nice and early pastel, at the same time a document of an artistic key moment in Liebermann's creation. The painting of the same name, differing in just very few aspects, is in possession of the Staatsgalerie Stuttgart (Eberle 1880/10)..
With a photo confirmation by Drs. Margreet Nouwen, Max-Liebermann-Archive, Berlin, from December 7, 2017. The work will be included into the forthcoming catalog raisonné of works on paper.

PROVENANCE: Collection of the banker Willy Molenaar, Berlin (from 1897 the latest to 1906).
Eduard Schulte, Berlin / Wiesbaden / Cologne (1908).
Consul general Dr. Paul von Schwabach, Berlin (1909), no proof for this collection after 1909).
Ownership of an industrialist, Rostock (from the first half or the mid 1930s).
Private collection Rostock (inherited from aforementioned in 1973).
The succession of provenance has been thoroughly scrutinized and did not produce any evidence regarding a loss attributed to prosecution.

EXHIBITION: Possibly: exhibition of the collection of the banker W. Molenaar, Salon Schulte, Berlin 1892.
Große Berliner Kunstausstellung (with a collective exhibition with more than 60 works by Liebermann), Landesausstellungspalast at Lehrter Stadtbahnhof, Berlin May 1 – September 26, 1897, cat. no. 918.

LITERATURE: Von Ausstellungen, in: Die Kunst für Alle, vol XXIII (1907/08), issue 15, 1st May 1908, p. 360.
Der Kunstmarkt, vol. IV ( 1906/07), p. 63: auction results of sale of the collection Molenaar through Lepke on 13 November 1906.
Enclosure of a letter from Eduard Schulte (Berlin, Düsseldorf, Cologne) from Berlin to Gustav Pauli, dated 19 April 1909.
Erich Hancke, Max Liebermann. Sein Leben und seinen Werke, with catalog of works, Berlin 1914, p. 360.
"He [Liebermann] called on a friend at Rembrandthotel and when he descended the stairs he looked out the window into a garden and he saw a number of old men dressed in black standing and sitting in an arcade. [..] When he characterized this very moment at a later point he used a drastic comparison: 'It was as if someone on a level walk suddenly stepped on a spiral spring that would sykrocket him'." (Erich Hancke, Max Liebermann. Sein Leben und seine Werke, Berlin 1914, pp. 157f.)

Apart from the two standing people in the background, this pastel has the same motif as a painting of the same name that is in possession of the Staatsgalerie Stuttgart (Eberle 1880/10) today. With this brilliant pastel Liebermann created a variation of his famous painting that differs only in terms of the figures in the background. As our sheet has been fully executed, it is not so much a preliminary study, but rather an independent repetition of the subject. In comparison with the painting, the color values are very similar, which is even more remarkable, as repetitions of the same motif with such a great love for details are very rare in Liebermann‘s oeuvre. With this depiction Max Liebermann captures a moment that is fugacious and unfading at the same time. The closeness of the arcade‘s arch may well be symbolic for the old men’s almost completed life circle. With a perspective slightly off the center axis this is one of Liebermann‘s greatest accomplishments. [KD]
More Information
+
Sell
Get a free appraisal for a similar object!
+
Register for
Max Liebermann
+
Buying from A-Z
+
Contact a specialist
+
Max Liebermann Biography
Share