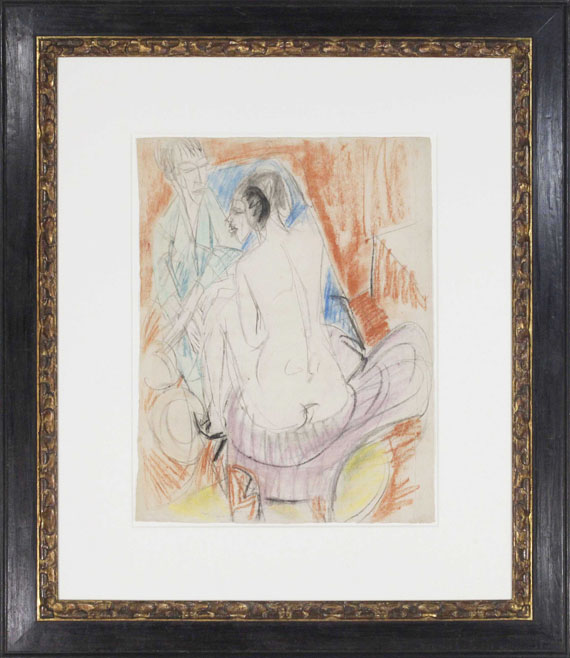 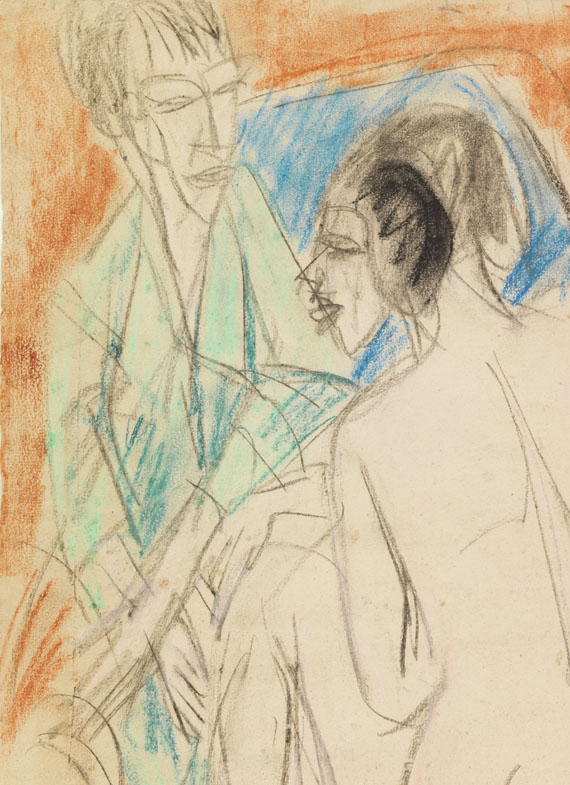 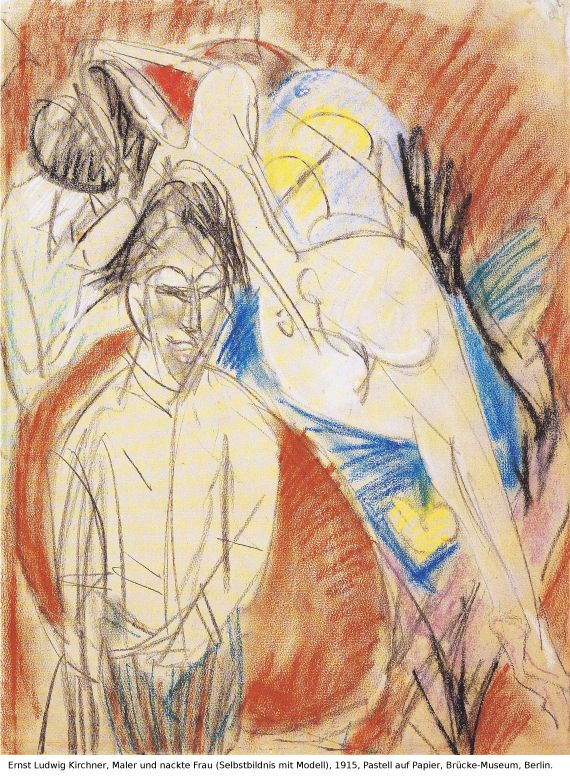 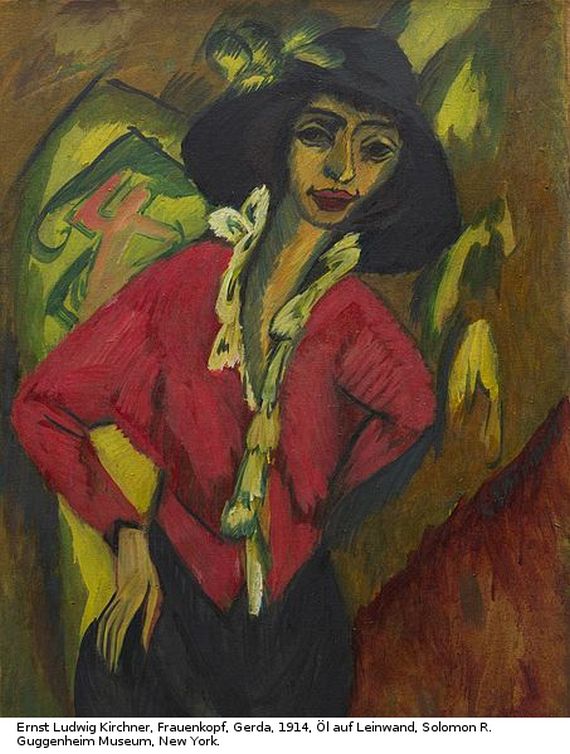 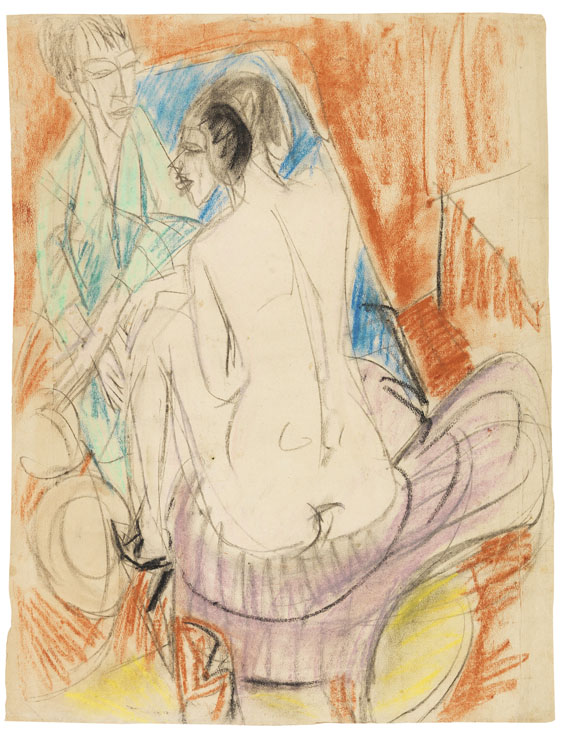 Only five drawings by Kirchner in this unusually large format have been offered on the international auction market (source: www.artprice.com)..

The work is registered at the Ernst Ludwig Kirchner Archive, Wichtrach/Bern.

LITERATURE: Ernst Ludwig Kirchner, Zum fünfundzwanzigsten Todestag, Aquarelle, Bilder, Zeichnungen, Galerie Nierendorf, Berlin 1963, p. 28, cat. no. 67, with illu.
"The artistic quality and significance of this pastel is one-of-a-kind. Comparable works by Kirchner are almost entirely in museum possession. What else is so remarkable is the format of the paper, as Kirchner chose to work in this size only on very few occasions. These occasions mark the highlight of his graphic creation."
Dr. Wolfgang Henze, Ernst Ludwig Kirchner Archive, Wichtrach, November 2018.

"The way I depicted people in my works was decisively influenced by my third wife, a lady from Berlin, with whom I would spend my life, and her sister. Their beautiful, architecturally structured bodies replaced the soft Saxon bodies. [..] The stronger and bolder experience I had in Berlin, this open relationship with this woman [..] inspired my work so much that I was able to create entirely new forms solely from this lust for life. Forms developd with such determination and consistency, that we were able to conquer the top of the Berlin modern art scene without any problem." (Source: From Kirchner's manuscript for "Die Arbeit E. L. Kirchners", presuably written in 1925/26, ex. cat. Ernst Ludwig Kirchner. Nachzeichnung eines Lebens, Kunstmuseum Basel, Bern 1979, published by Eberhard W. Kornfeld, pp. 336f.)

Spontaneously executed draft with dynamic lines and a pictorial appearance merge in this color chalk drawing and form a consummate composition of a studio scene into which the observer can fully immerse. Kirchner declared the seated rear nude to be the dominating figure of the image. Erna Schilling’s younger sister Gerda can be clearly identified as the nude on basis of her snail-shaped hair-do. Kirchner met the two sisters in Berlin in spring 1912, and he expressed his fascination for ”the two girls’ architecturally structured bodies and their strict forms.“ It seems that this physique inspired him to this impressive rear nude. Just like an ornamented column, the back moves aloft from the plush armchair, which serves as foundation. The nude appears in its light complexion, as it remains unaffected by the delicate coloring of the entire rest of the sheet. Kirchner wrote that it is not the individual color that matters, but that it is the accord of all colors that makes for the picture’s special atmosphere. In this context the interplay of the armchair’s light violet and the painter’s turquois clothes is particularly striking, especially when considering, that it seems to add color to the actually uncolored nude. The nude’s face would not be visible if Kirchner had not turned the head in profile and put strong emphasis on the sensuous lips. He also put an erotic accent on the black high heels, the only piece of clothing in the picture, and the snail-shaped hair-do. The figure’s erotic aura encroaches on the things that surround her, predominantly on the chair with the armrest folded down, eventually filling the entire room. What is strange, however, is the fact that the artist himself remains completely unaffected by this aura, it seems as if he does not want to accept the erotic offer. His closed face and cross-armed posture create a shielding distance. One possible explanation is that Kirchner already made his decision in favor of Erna as fiancee at that point, since he had spent three summers on the island of Fehmarn with her. However, Gerda, as rival of her sister, fully plays out her erotic appeal in front of Kirchner, who was so fascinated by her juvenile beauty that he eternalized her in the two paintings ”Frauenkopf, Gerda“, 1914 (Solomon R. Guggenheim Museum, New York) and ”Bildnis Gerda“, 1914/1926 (Von der Heydt-Museum, Wuppertal). Numerous paintings, drawings and prints from 1914 deliver proof of the close relationship Kirchner had with the two sisters. The painting ”Tanzschule“ (Dance Lesson), 1914 (Bayerische Staatsgemäldesammlungen), carrying such an inoffensive title in order to avoid a scandal, reflects the tensions of their ménage à trois: While Erna devotedly leans on Kirchner, emphasizing their tight bond, he is under the spell of Gerda’s nude dance. After 1915 Gerda’s traces in Kirchner’s life went lost. A pastel at the Brücke-Museum, included into the 1925 drawing book by W. Grohmann with the title “Maler und nackte Frau“ (Painter and Nude Woman), resembles this pastel so much in terms of style, colors and size, that it may well be considered its counterpart made on that very same day. Both works support and explain each others‘ role as pictures of a moment in Kirchner‘s life. The scene has changed: Now the artist is wide awake, standing in front of the round table in the foreground, and the naked woman, Gerda can be recognized once again because of her hair snail, reclines on the divan bed behind him. The rear nude and the artist entwined in a most daring composition. The blue field around Gerda‘s head in the pastel offered here must not be interpreted as representational, while it can be identified as a view onto the divan bed in the pastel at the Brücke-Museum. Kirchner never painted anything for decorative reasons, and his abstract forms always reference representational reality, a reality he best captured in his swiftly executed drawings. He turns his perceptions and sensations immediately into art with his drawing hand. Accordingly, his pastels, especially those that came into existence in his later Berlin days, are the most beautiful products of Kirchner‘s art.
More Information
+
Sell
Get a free appraisal for a similar object!
+
Register for
Ernst Ludwig Kirchner
+
Buying from A-Z
+
Contact a specialist
+
Ernst Ludwig Kirchner Biography
Share