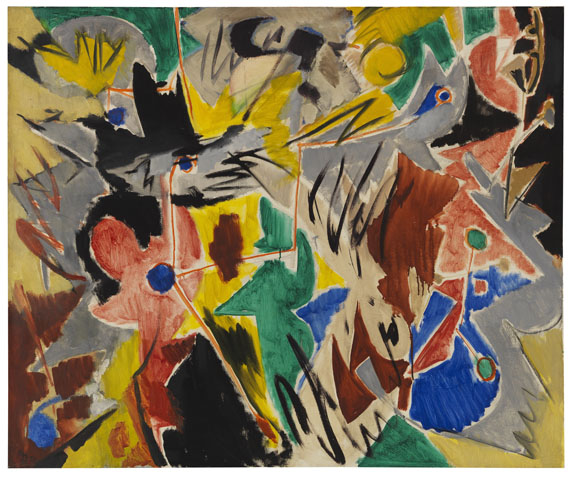 - Comprehensive exhibition history.
- One of the first works from thegroup of the "Rhythmical Pictures".
- In 1952 Nay eventually attained non-representation in his pictures.
- This is the first work in which Nay enobles the color gray.
- "Lob des Grau", a highlight between the Hekate poeriod and the Disc pictures..

Essay
The years 1950 and 1951 mark a decisive turning point in the work of Ernst Wilhelm Nay, at the same time they are characterized by an enormous creative power. Step by step Nay abandons all representational reference. The "Fugale Bilder" (Fugal Pictures) are still examples of both representational and non-representational art, despite an increasing abstraction all their inspiration still comes from visible reality, or from the ‘natural form’, as Nay calls it. The purely abstract period of creation in Nay’s oeuvre commenced with the "Rhythmische Bildern" (Rhythmic Pictures) in 1952. The entire image surface is created through the rhythm of the colors which would become the main distinguishing feature of his art. In our work "Lob des Grau", one of the first pictures in the work group of the Rhythmic Pictures, this development had already been completed. The composition is dominated by jagged color fields executed with great verve, they are tamed by restraining tones of black and gray and accentuated by color dots and lines. The non-colors black and gray correspond with the colors yellow, green and brown, Nay even puts them at equal level. Unlike it is the case with representational painting, they do not serve the purpose of creating depth and spatial effect, instead they form a "Bildflachraum"(Flat Image Space), as Werner Haftmann calls it, which is structured by the white of the canvas while rhythm is added through the staccato lines. This work is particularly remarkable for its gestural expressiveness – a tangible freedom of expression that captivates the observer. [SM]
More Information
+
Sell
Would you like to sell a similar object?
+
Register for
Ernst Wilhelm Nay
+
Buying from A-Z
+
Contact a specialist
+
Ernst Wilhelm Nay Biography
Share 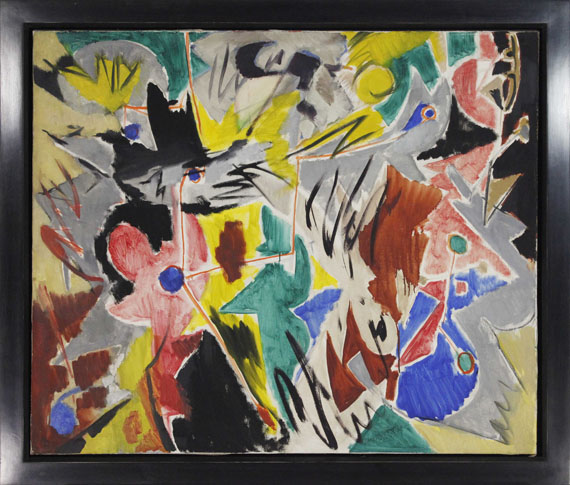