PROVENANCE: From the estate of the painter and art critic Rolf-Gunter Dienst (1942-2016), acquired directly from the artist.

"I think the world is so amusing that I can spend forever just sitting somewhere doing nothing. Once I open my eyes there is so much to do."
Peter Dreher in an interview with Heinz-Norbert Jocks, quote after: Die Diktatur und das Echo der Zeit oder das Glück, die Zeit zu vergessen, in: Kunstforum, vol. 150, Zeit - Existenz - Kunst, 2000, p. 228

Essay
"Coming to think of it, I always draw and paint just what I see. I never make things up or paint things that aren’t real. That just isn’t my thing", says Peter Dreher about his impressive oeuvre, at the core of which we find the multiple repetition of one and the same motif. In 1974 Dreher discovered the motif of the water glass, it turned out surprisingly interesting and extremely diverse, keeping the artist occupied and fascinated all his life. The work offered here may well be called a one-of-a-kind key work in Peter Dreher’s oeuvre, as it combines 48 works from this very early period of orientation in 1974. Additionally, it delivers proof of the fondness of experimenting the water glass sparked in him. It invites us to participate in the artist’s ideation, we literally witness the “birth” of the motif of the water glass. Some of the glasses depicted here are entirely empty, some are filled to the brim with liquids in various colors, some drinks have a head, some contain ice cubes while other glasses show slight residue of the drink on the bezel. His occupation with the empty glass over the following yearsis already suggested here. The artist explains his radical approach as follows: "Whenever I depict an object without adding any alterations, it is the most simple way of doing justice to it. [..] Before I began making images of glasses I painted large gray pictures. Back then I was convinced I had reached the most elementary level possible. At one point I realized that it maybe was true, and that it kept me from doing just black or white pictures, however, I also realized that I was still walking on formal grounds. It came to my mind that it is even more simple to focus on an entirely trivial object. If you are looking for simplicity, you have to search in consciousness and not in Formalism." (Peter Dreher in an interview with Franziska Leuthäußer, November 22, 2016, quote from: https://cafedeutschland.staedelmuseum.de/gespraeche/). The aspect of multiple repetition, a lengthy meticulously crafted process of the illustration of light and shade, allows for a visualization or even a conquest of time - an aspect that can only be realized through the means of painting. "Time becomes pleasure", explains the artist (quote after: Kunstforum, vol. 150, 2000). Rolf-Gunter Dienst, whose remarkable collection used to comprise this work, was a close and lifelong friend of the artist. He wrote about his obsession with the glass: "You quickly realize that the same vessel and the same format are his stage for an exploratory analysis and not just a crazy concept or even just a fixed idea. […] Artistic appeal, conceptual intelligence or tangible presence of the individual illustration do not go lost in the mass of illustrations. [..] The observer is asked to approach every single picture anew, in order to explore its soul. That is not a reproductive process, but an awareness of the singular and unreproducible." (Rolf-Gunter Dienst, Und immer wieder ein zylindrisches Glas, in: FAZ, September 1,1993, quote after: https://peter-dreher.de/Dienst). The artist called the series on which he worked in absolute quiet and seclusiveness "Tag um Tag guter Tag" (Day by Day Good Day) – a quote from the Zen master Yunmen Wenyan. It is his lifetime achievement, up until today he is working on new, very similar but never the same depictions of the tall, cylindrical and empty water glass. Time and again it is placed in the same spot on a table in his studio, however, since he paints at different times of the day and in different seasons of the year, the colors, shades and reflections vary. What becomes revealed is Peter Dreher’s hypersensitive instinct for even the slightest changes of light incidence, as well as his remarkable talent in adding a very special and sublime force of expression to the most trivial object. "I hope observers understand that they have to linger a little longer in front of my works, precisely because they feel they are looking at one and the same thing, while they are actually not", says Peter Dreher. "And that takes them to what it is all about: Painting." The quiet, oddly likable and almost meditative works by the artist are in renowned collections like the Mamco/Musée d’art moderne et contemporain in Geneva, the Pinault Collection in Venice, the Museum Frieder Burda in Baden-Baden, the Kunsthalle Mannheim, the Andy Hall Collection in San Francisco or the Chicago Art Institute. [CH]
More Information
+
Sell
Would you like to sell a similar object?
+
Register for
Peter Dreher
+
Buying from A-Z
+
Contact a specialist
Share 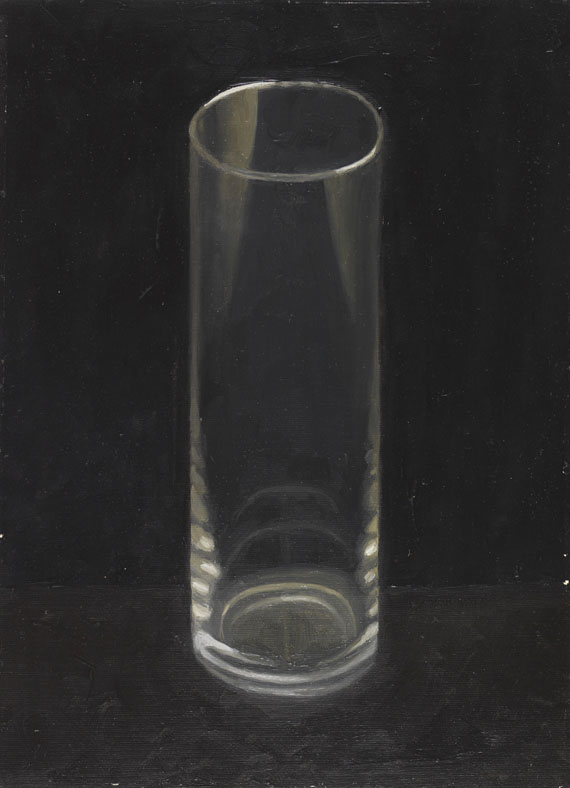 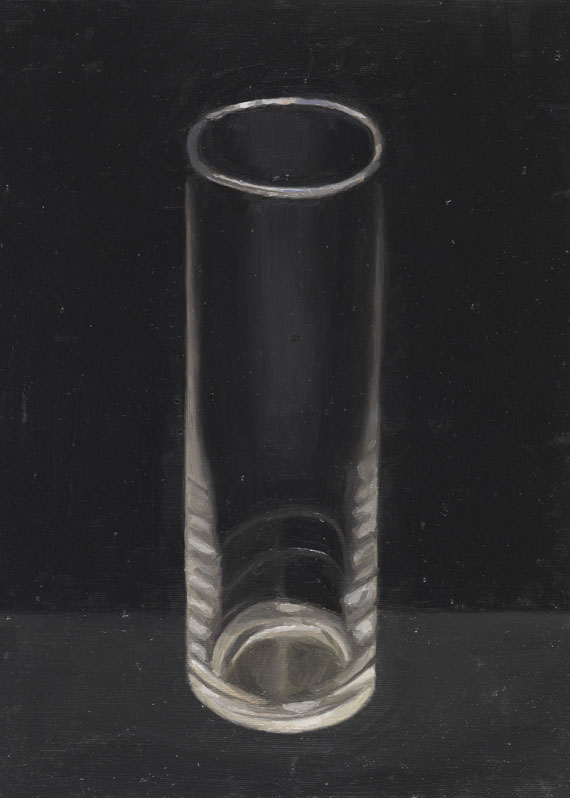 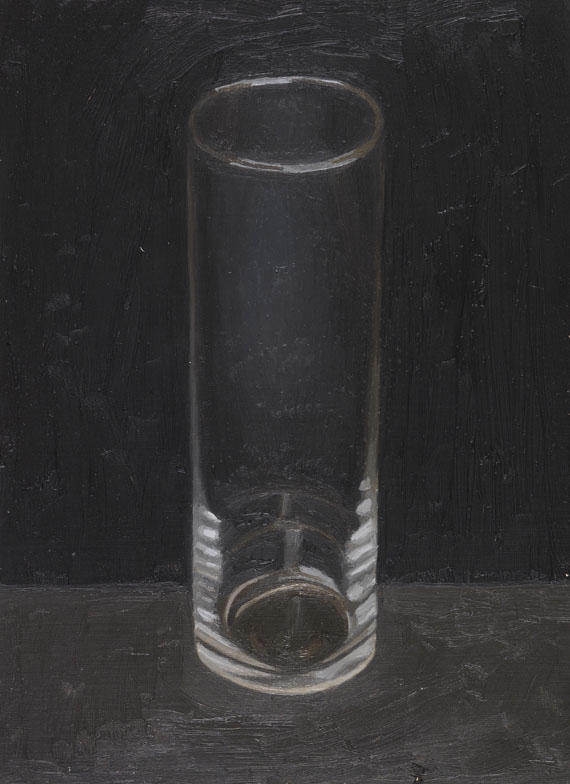 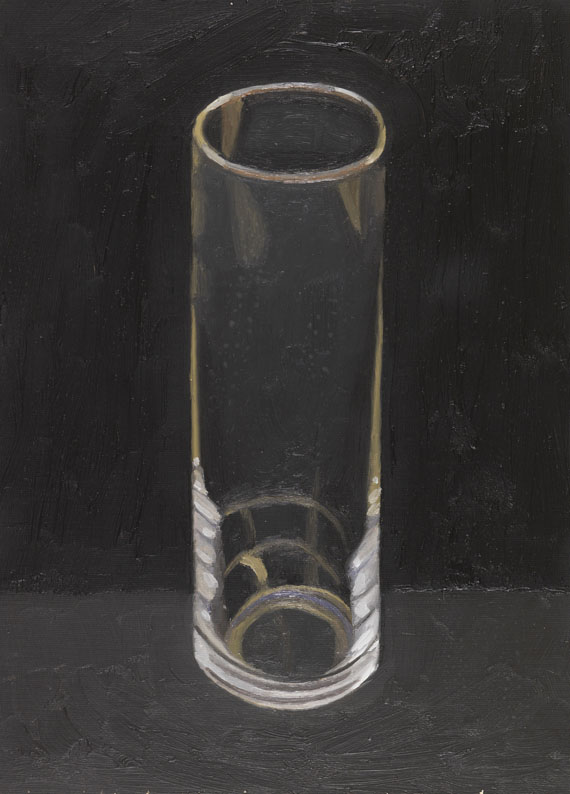 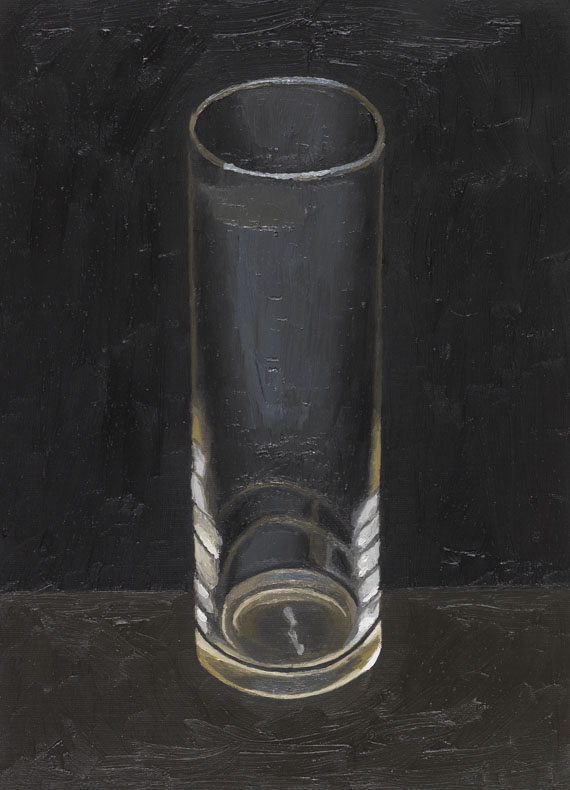 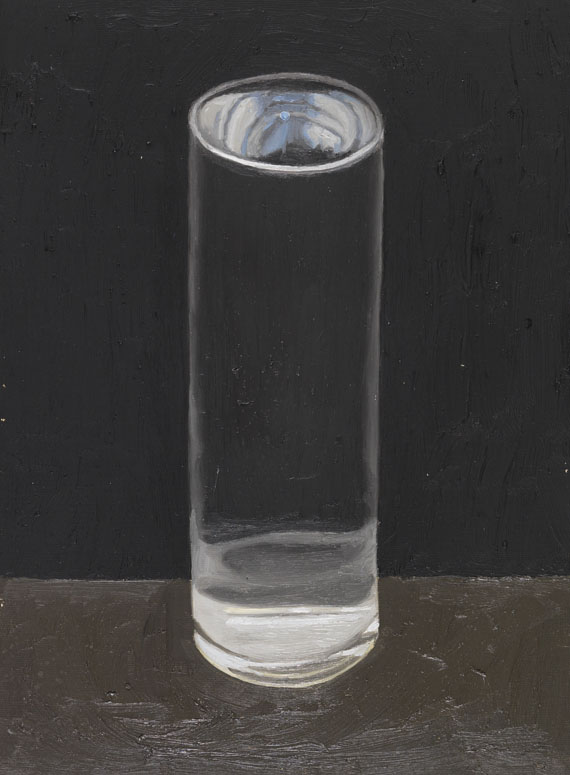 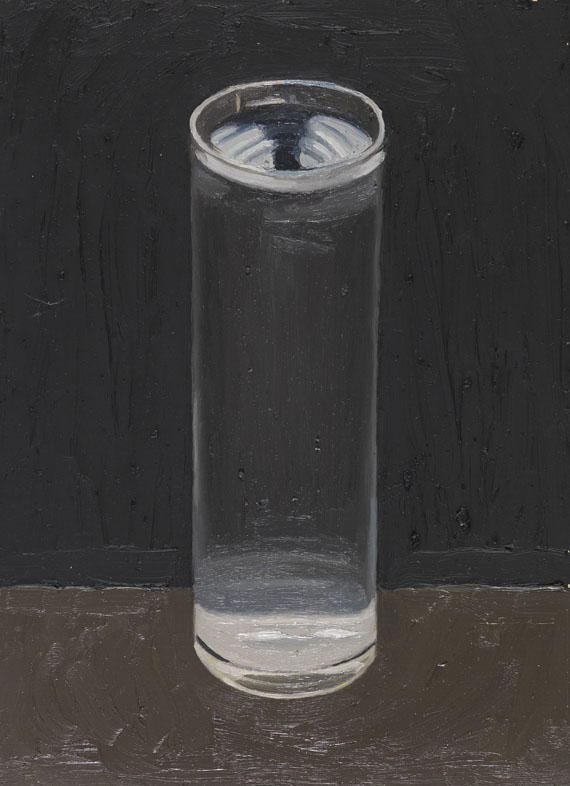 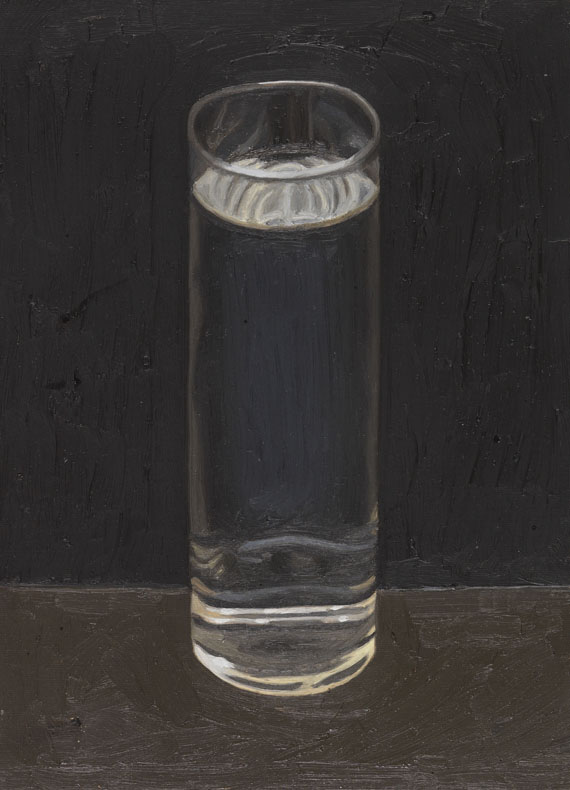 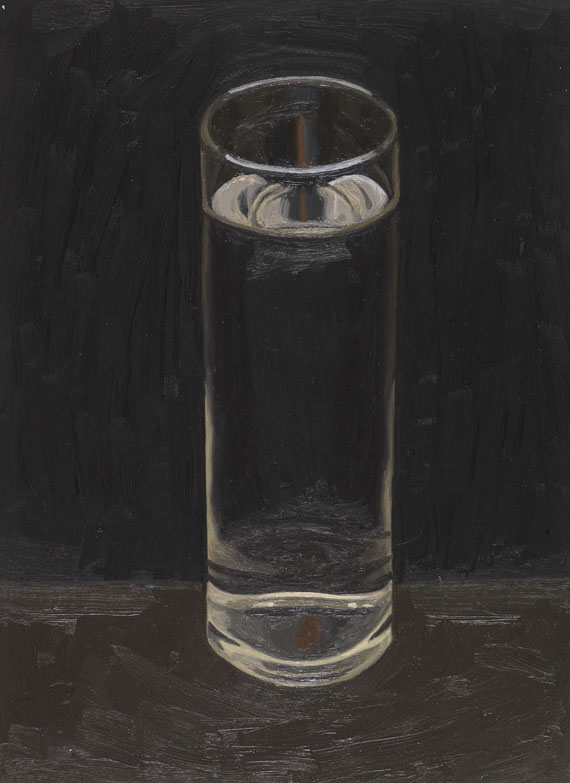 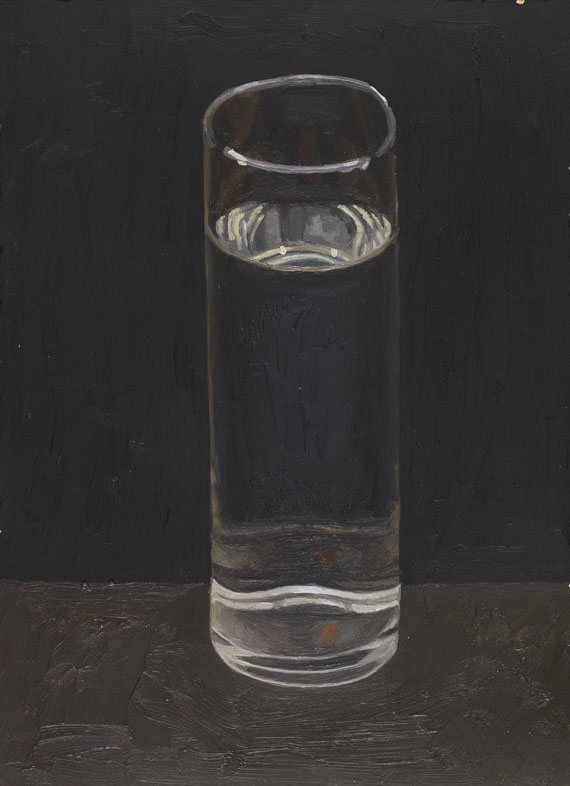 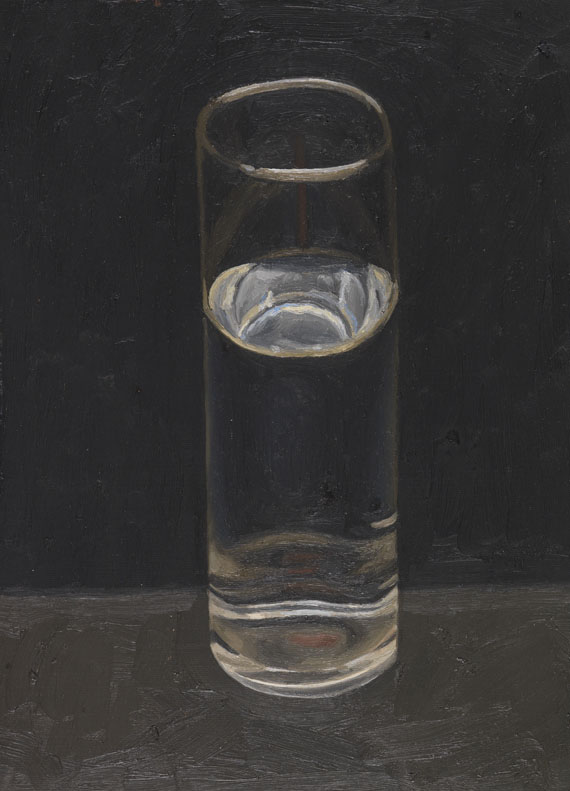