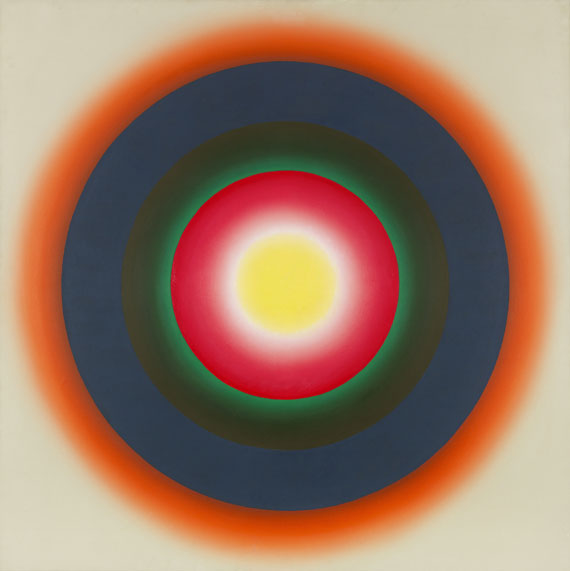 Powerful abstraction from the pioneering heyday of the Op-Art representative.
Fangor's works are in collections of the Museum of Modern Art in New York, the San Francisco Museum of Art and the National Museum in Warsaw.

Essay
With their oddly blurred and rich color fields and circular formations, the fascinating and startling works of Wojciech Fangor are considered exceptional creations within Color Field Painting and Op Art. Fangor experienced increasing fame as early as in the 1960s after he had emigrated to the United States, where his works were shown alongside works by Josef Albers, Bridget Riley, Frank Stella and Victor Vasarely in two exhibitions at the Museum of Modern Art in New York in 1961 and again in 1965. In 1970 the New York Guggenheim Museum organized his first solo show and eventually put him at the center of attention of the international art world. The Polish artist had discovered abstract painting in general, and Color Field Painting in particular as his preferred means of expression as early as in the 1950s, at around the same time that Kenneth Noland and Jasper Johns conceived their first "Target Paintings", when he made first experiments for which he used softer and richer oil-based paints instead of acrylic paints. As of 1956 he created his first bright and colorful compositions of blurred circles and billowing forms with optic gimmicks and illusions which he described as "Positive Illusory Spaces". Fangor attained an absolutely inimitable visual language that allowed him to show works at acclaimed institutions like the Amsterdam Stedelijk Museum as early as in 1959. The work offered here was made at the climax of his artistic career in 1966 and is a great document of his mastery in handling color, blur and spatial depth. Additionally, it delivers impressive proof of his frontier crossing in terms of pictorial and visual options. The artist superimposes scores of thin and glazing layers of rich and colorful oil paint with a soft brush and creates a pulsating composition characterized by a vexing motion. The misty and blurred contours unfold an effect so strong that the observer is not only drawn to the work, he is faced with an entirely new visual experience. Wojciech Fangor’s works have experienced international rediscovery over the past couple of years. In 2012 they were subject of a Grand Retrospective at the Polish National Museum in Cracow. In 2014 the famous Swiss art auctioneer and collector Simon de Pury organized the solo show "Color, Light, Space" at Galerie 3 Grafton Street in London, which the contemporary art world celebrated as a "revelation", as the New York Times reported. On this occasion De Pury wrote about the eternalness of Wojciech Fangor’s works and their capturing effect: "The first contact with Fangor's work will be a revelation for anyone who is not familiar with it. Fangor's bold use and choice of saturated colorscombined with simple shapes and blurred edges is unlike anything that any other artist was doing between the late 1950s and early 1970s. Seen today it has lost none of it's freshness and could actually easily be mistaken for work having been done now." (Simon de Pury, 2015, quote from: www.depurydepury.com/event/wojciech-fangor/). [CH]
More Information
+
Sell
Would you like to sell a similar object?
+
Register for
Wojciech Fangor
+
Buying from A-Z
+
Contact a specialist
Share 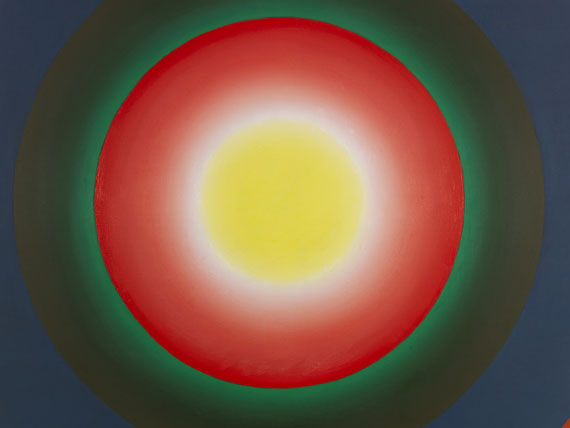 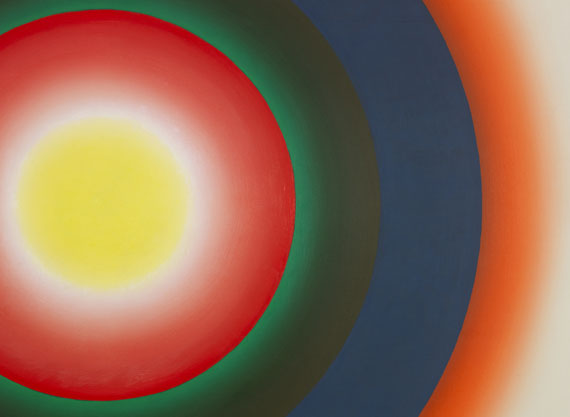