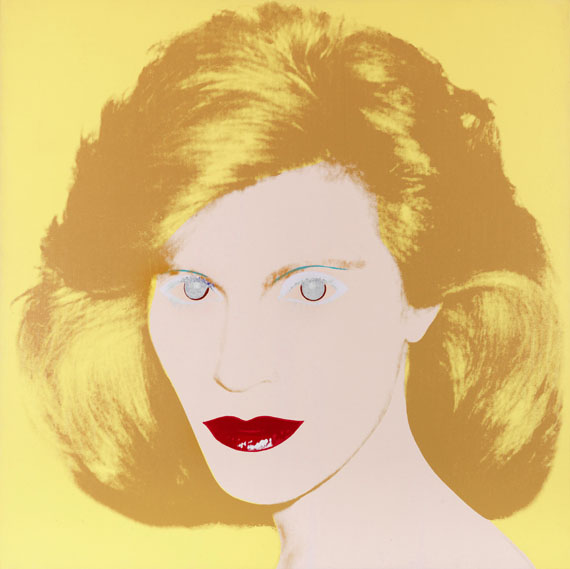 • This portrait has everything that mattered to Andy Warhol: glamour, beauty, masquerade!
• Fascinating interplay of commission portrait and self portrait.
• Impressive example of Warhol's yearning for a transformation of the self and his ability to add aspects of his own personality to his femal models.
• Unique object.


An even complexion, distinctive red lipsand bright blue eyes capture the observer. Who is the person that Andy Warhol ceded so much presence to in this impressive portrait? It it a celebrity? An unknown lady with the wish to have herself depicted in a striking picture? Or is it perhaps a self-portrait of the artist? “Making money is art and working is art and good business is the best art.“ (Andy Warhol, The Philosophy of Andy Warhol, New York 1975, p. 92.) The occupation with the portrait concept runs through the entire oeuvre of the pop artist like a golden thread, reaching its peak with the commission portraits from his later period of creation. As main source of income to fund his costly lifestyle the portraits had absolute priority– no matter what other project he was working on, there were always a couple of portraits in the making in some corner of his loft. He offered financially strong clients an opportunity to become part of his pantheon of famous people and stars and to live up to his famous words"In the future everyone will be famous for fifteen minutes" simply through his characteristic depiction. The friendship with Diana Vreeland, chief editor of Vogue magazine, helped Warhol to come in contact with the ”Park Avenue Society“ and the staff of his Factory did the necessary canvassing. Acquiring new clients was an easy thing, as his idea was met with great interest by members of the Upper Class – among them Joan Robbins.
“Don‘t pay any attention to what they write about you. Just measure it in inches.“ (Andy Warhol, http://www.the-culture-counter.com/andy-warhol-philosopher/) In a photo session in1983 Warhol made a lot of Polaroids of her, one of them would later serve as basis for the silkscreen print on canvas. Even though she was not as famous as Elizabeth Taylor or Liza Minelli, Warhol rendered the portrait with likewise thoughtfulness and arranged it in same composition. For his commission works Andy Warhol always respected his clients’ wishes, at the same time he took into account that art collectors are obsessed with the desire to own a unique object, so he reduced the number of canvasses with the same motif while the variation became more versatile and more perfect in form, flaws and shortcomings that he accepted as part of the production process of works from his early period of creation gave way to a nearly perfect color application. Nevertheless, he still integrated own ideas and wishes and succeeded in convincing his clients thereof. This becomes particularly obvious in the work offered here. "I wonder whether it‘s harder for 1) a man to be a man, 2) a man to be a woman, 3) a woman to be a woman, or 4) a woman to be a man. I don‘t really know the answer, but from watching all the different types, I know that people who think they‘re working the hardest are the men who are trying to be a woman.“ (Andy Warhol, The Philosophy of Andy Warhol (From A to B and Back Again), New York, 1975, S. 98.)
In the early 1980s Warhol and his photo assistant Christopher Makoscame up with the idea of posing in costumes. For some of his films and self-portraits he dressed in drag, which earned him the nickname "Drella" among friends and colleagues– a combination of "Dracula“ and "Cinderella". Over decades Warhol used every opportunity to play to the gallery, masking and transforming himself in every conceivable manner, taking on different identities and delivering prove of his chameleon qualities. The self-portraits as transvestite are definitely the most subtle expressions of his ambivalent self-perception. Fascinated by Hollywood’s extravagant dream world, he imitated the illustrious poses of his idols like Greta Garbo and Truman Capote – as many photographs in the inventory of theAndy Warhol Museum in Pittsburgh show. In the examination of the immaculate beauty of the stars he was confronted with his own physical shortcomings– the big nose, impure skin, thin hair– under which he suffered throughout his entire life. There are early photos in which he tried to cover up these flaws with pencil or ink. Later on he would always wear a noticeable wig sprayed with silver. In a diary entry Warhol mentions that he had "glued" himself more than sixty times. This term does not only refer to the fixation of the wig, Warholused "gluing" to describe the entire process of preparation for a night out, putting on makeup, choosing a dress and getting his hair done. Warhol even hired a makeup artist who transformed his face into the face of a woman by applying an intensive white makeup, which also helped to cover up all the cosmetic imperfections. In the end his face seemed to be just as perfect as the faces of all his celebrities. Photographs show him in a variety of dressesand wigs with curly, long, short, dark or blonde hair, making every Polaroid a unique piece. “An artist is somebody who produces things that people don't need to have but that he, for some reason, thinks it would be a good idea to give them.“ (Andy Warhol, The Philosophy of Andy Warhol, New York 1975, S. 144.) The ”Portrait of a Lady“ resembles the Polaroids so much that one may assume that this work is a self-portrait, at the same time it has everything that mattered to Warhol: beauty, glamourand masquerade.The portrait is mask-like, with a perfect complexion, wrinkle-free and highly staged. Accordingly, this portrait is not just a representation of his client, but a document of the artist’s idea of beauty. [CE]
More Information
+
Sell
Get a free appraisal for a similar object!
+
Register for
Andy Warhol
+
Buying from A-Z
+
Contact a specialist
+
Andy Warhol Biography
Share