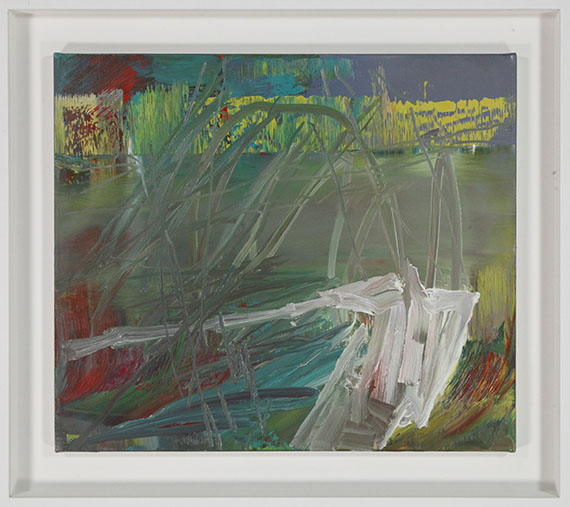 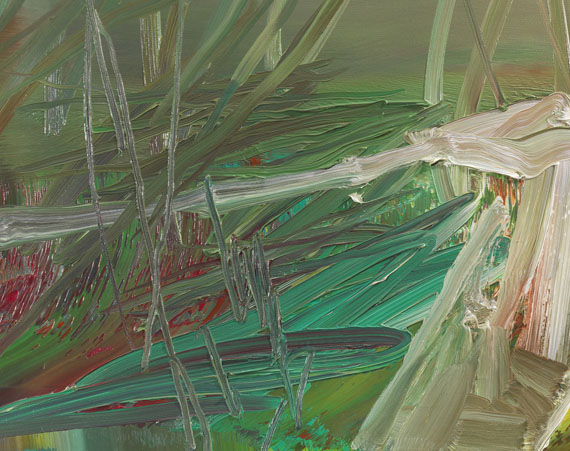 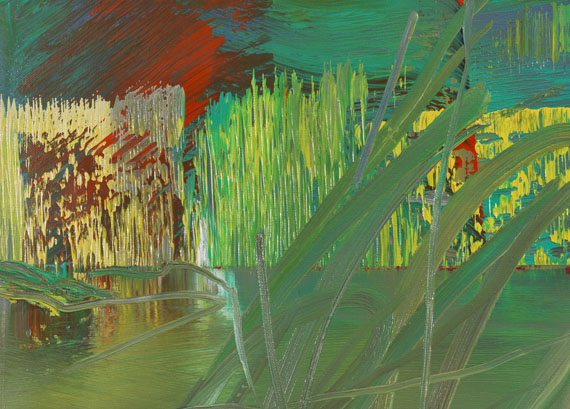 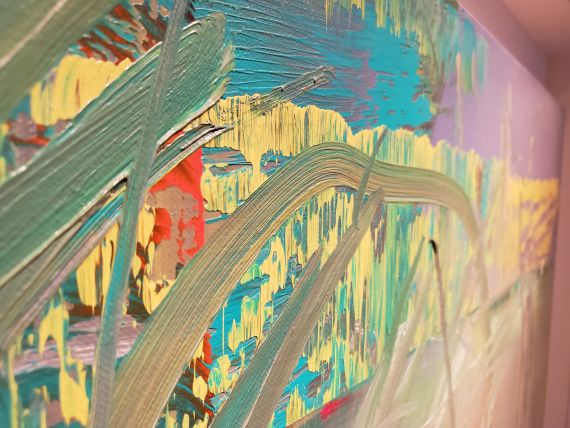 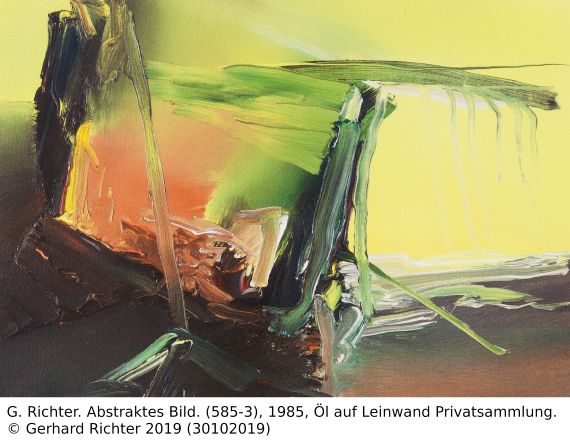 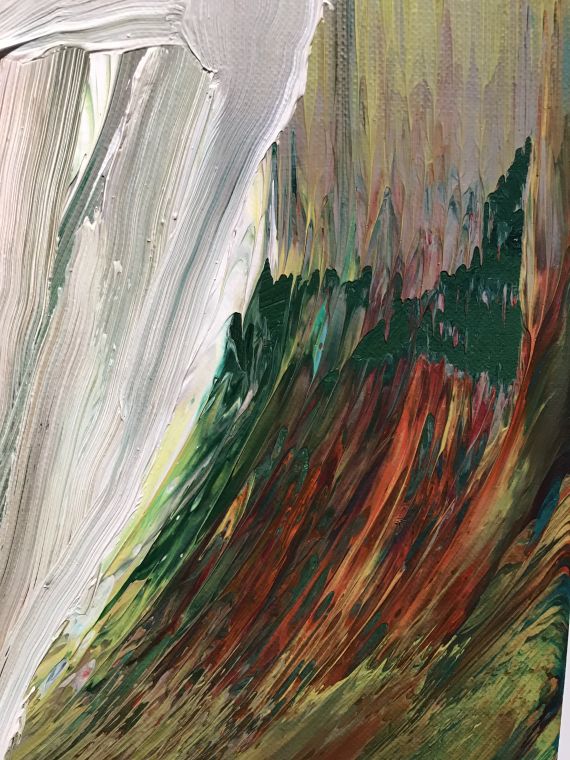 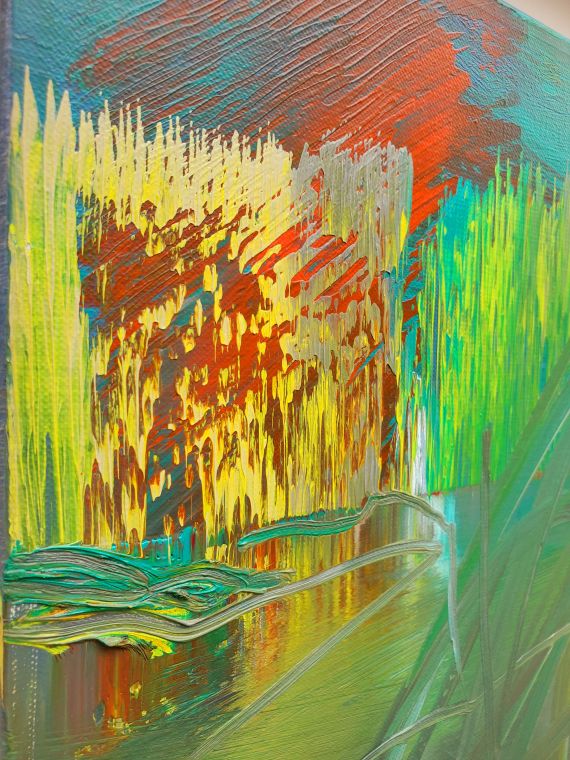 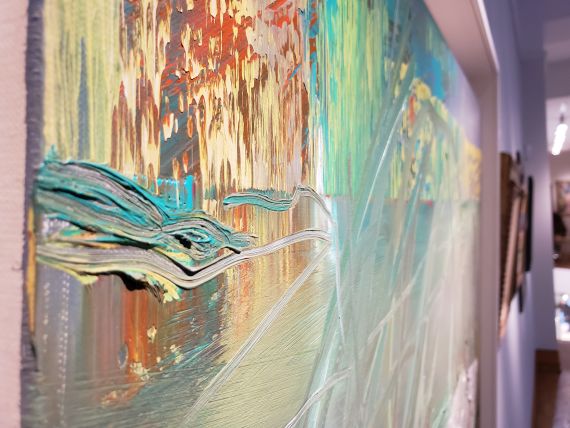 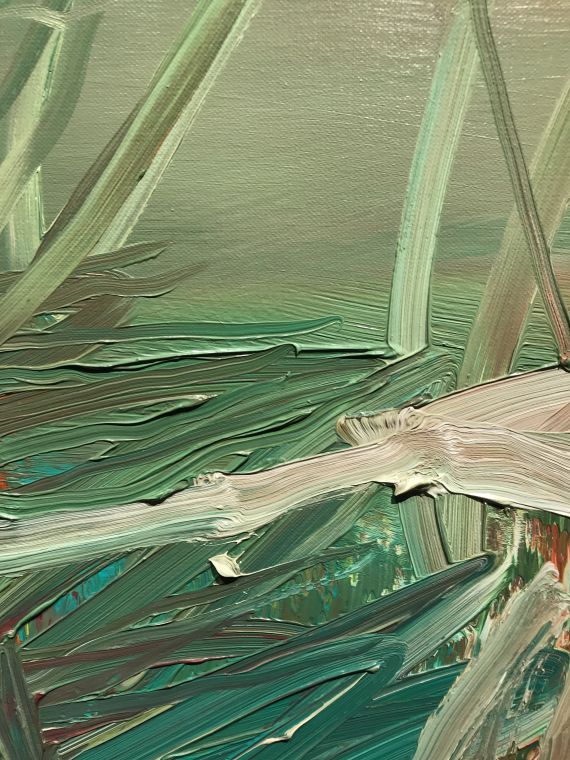 • A fascinating blend of Informal and Abstract Expressionism
• The gestural motion reflects the artist's signature style.
• Shown in the acclaimed exhibition "Gerhard Richter. Abstraktion" at Museum Barberini in Potsdam in 2018.

"What is so paradox is that I always begin with the intention to obtain a closed picture with a motif in a true composition, and that I then destroy this intention piece by piece with quite some effort, almost against my will, until the picture is done, and there is nothing left but openness.“
D. Elger and U. Olbrist (editors), Gerhard Richter. Text 1961 bis 2007, Colgone 2007, p. 185.

First abstract works can be found in Richter’s oeuvre of the 1960s, however, the lot of abstract works came into existence in the 1970s and 1980s when Richter’s creative production was characterized by "a romantic will to abstraction" (Jürgen Harten, Gerhard Richter, Cologne 1986, p. 9). While the first abstract paintings still had a figurative core in the broadest sense, the works from the phases of the color plates and in-paintings, the gray pictures and the discs entirely left representational grounds. Color as such is the central theme of many his works. In the early 1980s Richter began to combine his shadowy inpainted backgrounds with expressively applied, pastose structures. For this technique the artist employed various tools, using a range of broad brushes but also squeegees, spatulas and paint rollers with which he applied the rich colors onto the canvas until a first image comes into existence. These images are then altered, destroyed and enhanced in an artistic process that can last up to several weeks. During this process the artist observes his work to a point of satiation and question at which he continues to work on it until he eventually reaches a result that convinces him of having created a real work of art. He explains: "What is so paradoxical is the fact that I always start with the intention to realize a complete picture with a properly composed motif, then I will piece by piece destroy this intention with quite some effort, almost entirely against my will, until the work is done and there is nothing left of the initial plan“ (D. Elger and U. Olbrist (editors), Gerhard Richter. Text 1961 bis 2007, Cologne 2007, p. 185). In this special process of creation coincidence also plays a decisive role. Richter accepts it and employs it as a method to reach the desired artistic aim, making it not an entirely arbitrary process, but to some extent a planned integration of an element of surprise. Richter confesses:"I am often stunned to see that coincidence is so much better than me." (Ex. cat. Gerhard Richter, K20 Kunstsammlung NRW, Düsseldorf 2005, p. 81). The wiped layers are superimposed with expressively curved broad lines or color traces. The eye of the beholder does not only take joy in the varying surface structures, but is also startled by the play of the hidden color parts from earlier states of the repeatedly transformed picture. By means of this succession of technically constructive and destructive elements he creates a very ambivalent pictorial arrangement, which is subject to a certain concept while it also shows a spontaneous, gestural and very sensual character.
Considering that the last five auctions of paintings by Gerhard Richter were held in the USA, China and the UK (until late September 2019), we take strong pride in offering such a typical work from the period of the "Abstract Pictures" from the 1980s by the globally acclaimed German artist in our upcoming auction. [CH]
More Information
+
Sell
Get a free appraisal for a similar object!
+
Register for
Gerhard Richter
+
Buying from A-Z
+
Contact a specialist
+
Gerhard Richter Biography
Share