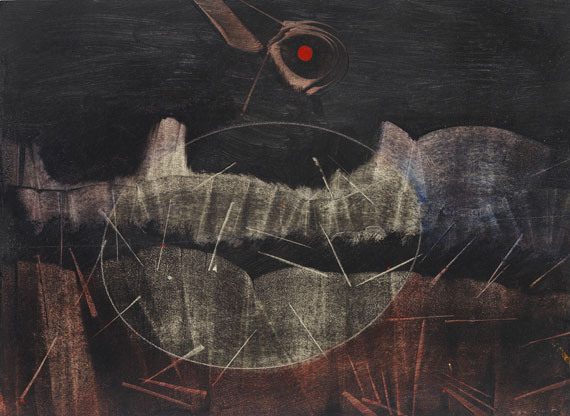 Essay
Max Ernst was 63 years old when he was awarded the Grand Prize for Painting at the XXVII. Venice Biennale in 1954. While the Paris Surrealists ostracized Ernst for a violation against anti-conformism, the market value of his works rose significantly, and the artist was able to live a financially worry-free life. Together with Dorothea Tanning he left Paris and resorted to the village Huismes in the Touraine province. He began to make almost non-representational paintings with largely monochrome surface structures and textures with an overall calm and harmonious effect. The gloomy decalcomanias and geometrical figures from his days in exile made way for new content: Homages to poets and artists as well as historical and philosophical themes. The title of the work offered here has two possible reference points: ”Night on Bald Mountain“ is a series of compositions by Modest Mussorgsky and is considered one of the most renowned examples of Russian 19\up6 th century program music. It’s an account of a witches' sabbath occurring on St. John's Eve. What seems more likely, however, is that Max Ernst references the mountain ”Mont Chauve“ near Nice. He transfers the traditional genre of landscape painting to a surreal pictorial language and thus defines his own unconscious way that he experiences the world, a way that goes beyond any sensuous conceivability and spiritual comprehensibleness. The imitation of the visible is replaced by a vision of the un-seeable, the non-obvious. What he sees in the outer world helps him to discover what lies hidden in his subconsciousness. Dream and reality, past and present merge in his works and form a supernatural reality. [CE]
More Information
+
Sell
Would you like to sell a similar object?
+
Register for
Max Ernst
+
Buying from A-Z
+
Contact a specialist
+
Max Ernst Biography
Share 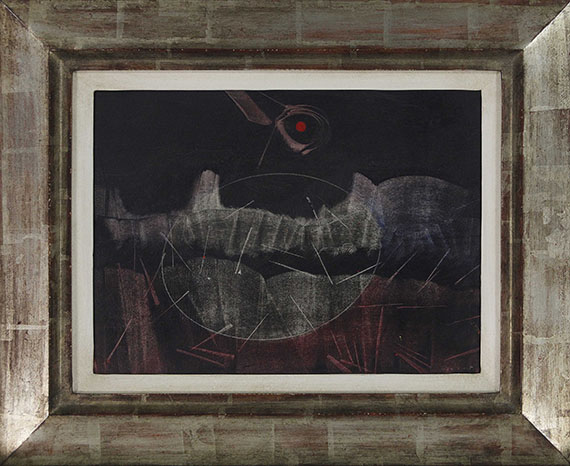 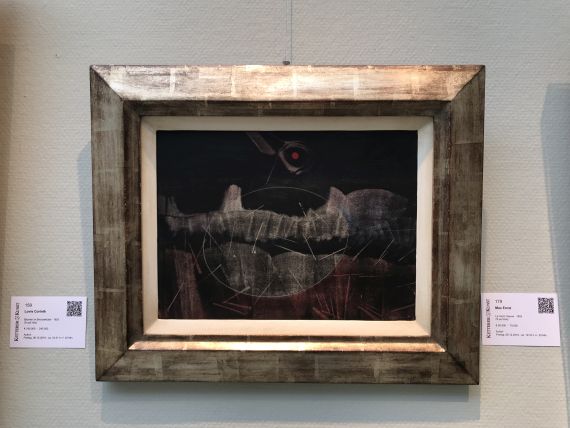