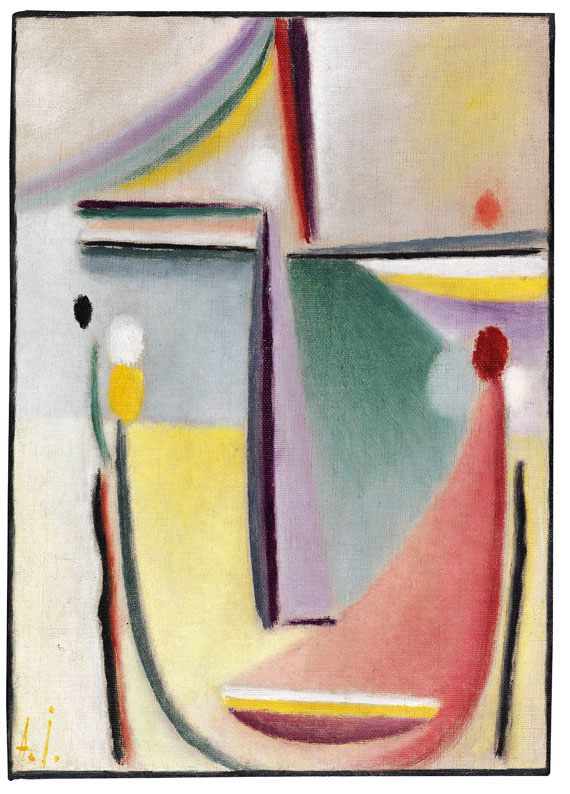 • One of the most intensely-colored "Abstract Heads"
• Bold and ultra-modern color combination
• One of the first "Abstract Heads" from the important progressive period of creation around 1920
• Key document of radicalness in classic portrait painting.

Essay
In 1917 Alexej von Jawlensky, his wife Helene Nesnakomoff, his son Andreas, and Marianne von Werefkin moved to Saint-Prex near Zurich. After he got evicted from Germany, he had been living in Swiss exile since 1914. It was in those days that he made his first 'faces of saints' and several 'mystic heads' which showed faces that had already gone far beyond characteristic portraits. In 1918 Jawlensky and his family as well as Werefkin moved to more southern realms for health reasons. In Ascona on Lago Maggiore the artist began working on the series of the â€˜abstract headsâ€˜(1918-1935), of which the work offered here is part. "We relocated to Ascona in early April 1918. The following three years in Ascona would be the most interesting in my life. [..].", wrote the artist in retrospect in his memoirs about the significance of this period for his artistic creation. In comparison with the 'faces of saints' and the 'mystic heads', Jawlensky took the simplification and abstraction of human facial features to another level with the â€˜abstract headsâ€™. He attained a depiction of human faces that was as far from a naturalistic account as possible. Anatomic features are transformed to geometric forms arranged in a symmetric order that calls reminisce of architectural drawings. The entire composition of the work offered here is geared to the vertical line in center that suggests a nose, while the mouth is composed of horizontal lines and a crescent-shaped form, eyes and eyebrows are replaced by horizontal ans slightly diagonal lines. Jawlensky fills the he oval face, slightly cropped by the image carrier, with complex geometric form and color fields of cropped or slightly rounded triangles and squares.
His urge for artistic experiments with variations of form and color now helped Jawlensky to attain an entirely individual principle of design and serial production thus providing the basis for later artistic endeavors of Hans Albers or Andy Warhol. The â€˜abstract headâ€™ offered here was made around 1921, a year when a large number of Jawlenskyâ€™s works where shown at grand retrospective traveling exhibition Germany with stops at, among others, in Berlin, at Hans Goltz in Munich in mid August 1920 and later in Wiesbaden, where the exhibition was met with great enthusiasm. It was for this very reason that the artist paid the then very popular health resort a visit upon he decided not to return to Ascona and to stay in Germany instead.
It was during the artistâ€™s lifetime that his work series, especially the â€˜abstract headsâ€™ caught the fancy of other artists and collectors of contemporary art . Among them were Hans Arp or Karl Schmidt-Rottluff, who acquired the work "FrÃ¼hlingsatem" in 1936. Willi Baumeister bought the â€˜abstract headâ€™ "Letztes Licht", Wassily Kandinsky "Morgengrauen" and Paul Klee got the two â€˜abstract headsâ€™ "Morgenlicht" and "Herbstlicher Klang" in exchange for his own works. In the 1980s our was gifted to the Canadian Mo Rothmann. In the 1960s Rothman became one of the top managers of Columbia Pictures, in the 1970s he made a name for himself by promoting Charlie Chaplinâ€™s movies and helping him to an international comeback. Following Rothmanâ€™s advice Chaplin returned to the USA for the first time in twenty years in 1972 in order to promote his films â€“ one of the then most clever PR coups in the film business. Rothman is considered the main protagonist behind Charlie Chaplinâ€™s comeback in those days. With a stop in a private collection in London the work found its way to Monaco and eventually into a German private collection. [CH]
More Information
+
Sell
Would you like to sell a similar object?
+
Register for
Alexej von Jawlensky
+
Buying from A-Z
+
Contact a specialist
+
Alexej von Jawlensky Biography
Share 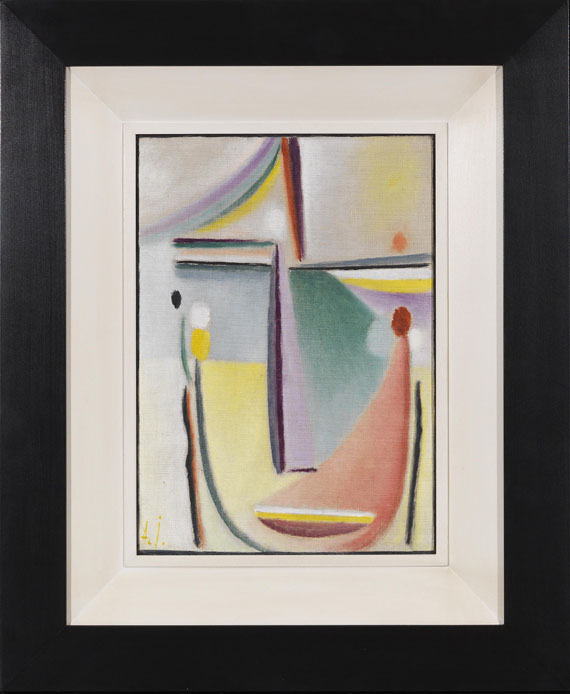