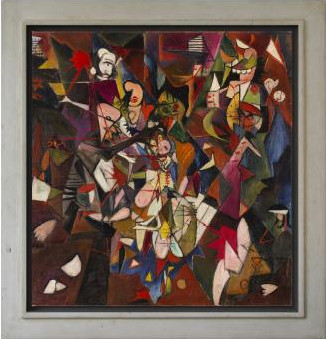 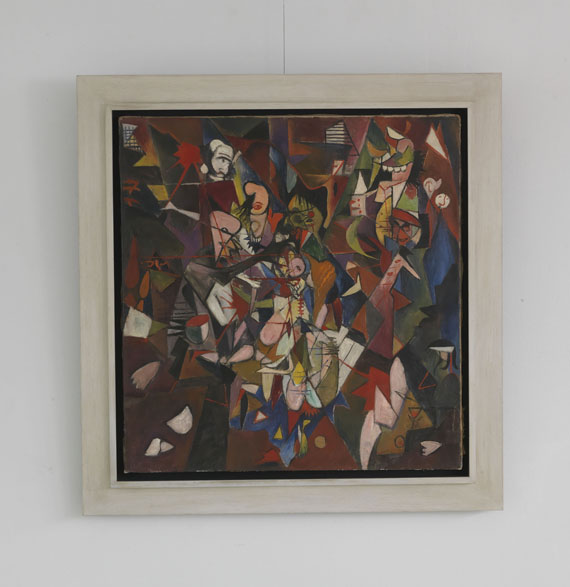 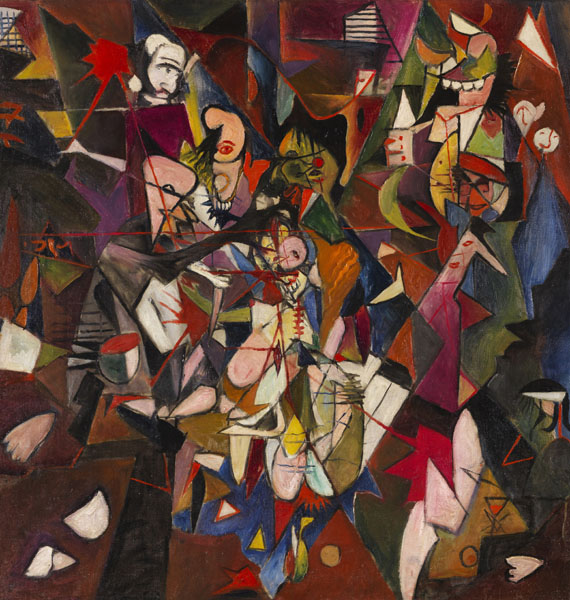 • Works by the artist are among the icons of German 20th Century Arte
• A solitary work of seminal importance in Rudolf Schlichter's oeuvre
• Shock and emotional unrest caused by the experience made as ammunition driver culminate in this abstract work
• A very personal painting, in longtime possession of Speedy-Schlichter.

PROVENANCE: Collection Speedy-Schlichter (1960 the latest) (with a stamp on verso of the canvas and on the stretcher)
Collection Guido Rossi, Milan (1977 the latest).

The heroes of Rudolf Schlichter's childhood can be found Karl May's fantasies of the wild West. After studying at the venerable academy in Karlsruhe, with, among others, Wilhelm Trübner and Hans Thoma as teachers, from 1911 to 1916, they gained in significance again in dramatic scenes full of excessive carnage between cowboys and Indians that Schlichter made during military service. In 1916 Schlichter was drafted and served as ammunition driver at the front in France. The potential opponent of war witnessed cruel slaughter and went on hunger strike. The traumatized artist used the time in military hospital to work up the experiences and at the same time to come to terms with his own “lust for bloodthirsty and adventurous wild West scenes”. From these terrifyingly brutal wild West scenes Schlichter then developed his preference for motifs that not only show his affinity for brothel- and murder scenes, but that also express his personal sexual preference that went along with it. “Zerrissene Welt“ (Torn World) was probably made in the time of the wild West scenes. We do not associate abstract compositions like we know them from, for example, Wassily Kandinsky, with Rudolf Schlichter, although he made first abstract compositions at the beginning of his studies in Karlsruhe after attending an exhibition of the “Neue Künstlervereinigung München”. In this case, however, for the implementation of the idea Schlichter was inspired by the principle of analytical Cubism and thus broke forms and color fields open in favor of a rhythm of forms. Schlichter shifts the physicality of things and their position in space in a variety of ways, and hides the conflict between the deformation of the "real object" and the composite memory of the same object for the viewer. Variants of shapes, triangles, semicircles, rhombuses, arches in small areas or extensive fields change in bright colors, are interrupted by lines and scribbling, seemingly form an orderly mesh over the almost squared format. On closer inspection, however, the broken, illusionist “resemblance to nature” turns out to be a place of horror: mutilated bodies, cut off limbs and heads, bizarre grimaces alternating with harmless color fields. Nightmarish mythical creatures frolic in the action and take the upper hand in a compact narration that suggests a severe feverish state. Just as Otto Dix made multiple etchings of dismembered bodies of fallen soldiers in the trenches and thus documented the horror of war in a drastic manner, Schlichter‘s desired compensation seems to be the "cultivation of evil as a religion". The artist hides the thoughts that haunt him in a confusion of cubic forms. Having arrived in Berlin in 1919, Rudolf Schlichter met like-minded people like George Grosz as member of the “Novembergruppe” and the Berlin Secession. He found a spiritual home in the circle of artists like Alfred Döblin, Bert Brecht and Erich Kästner. Together with the Dadaists around Raoul Hausmann, Hannah Höch, Johannes Baader, Wieland Herzfelde and John Heartfield, Schlichter was able to fully act out his cynical and subversive potential and express that biting and exaggerated criticism of the violent society after 1918. The artist did not settle for the depiction of everyday brothel scenes, instead he describes the intruders’ brutality in an armed attack on whores and customers. The apocalypse as a principle becomes a symbol for Schlichter’s perception of his time, coined by upheavals, dictatorship and war, influenced by the bitter loss of humanity in modern civilization. [MvL]
More Information
+
Sell
Get a free appraisal for a similar object!
+
Register for
Rudolf Schlichter
+
Buying from A-Z
+
Contact a specialist
+
Rudolf Schlichter Biography
Share