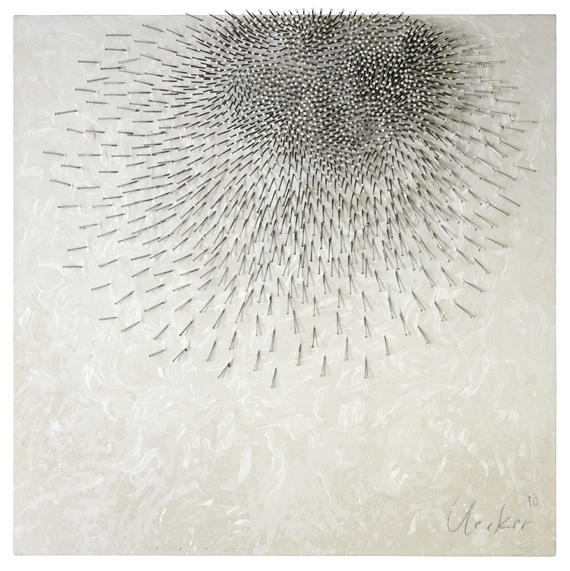 • Rare, exceptionally gentle poetic composition
• Despite its impressive format the work is characterized by a strong airiness
• In private ownership for 30 years
• For the first time on the interantional auction market.

Accompanied by a certificate issued by the artist in 2012.
The work is regsitered at the Uecker Archive with the number GU.90.038 and will be included into the forthcoming catalog raisonné.

Günther Uecker doubtlessly is one of the most important representatives of German Post-War and Contemporary Art. The fascination for his work remains unbowed, as permanent record results in international auctions and a very dense exhibition history deliver impressive proof of. Ever since it was made, the untitled work offered here had been in the possession of a German private collector who is an artist just like Günther Uecker. This is the first time in 30 years that it becomes accessible for the public. What is particularly striking about the work is the light and facile composition which stands in fascinating contrast to the powerful and dense nail fields from the 1980s and 1990s. In this work the nails are arranged in the upper part of the picture and gently trickle downwards. In many of the big nail fields painting is of minor importance, it only provides some sort of protective underground for the dense fields of nails. However, in this work Uecker leaves remarkably much space to painting. Uecker applies small white whirls of colors onto the canvas with his fingers, they dance across the surface and add a joyful airiness to the composition. The work emanates both poetic tenderness as well as explosive power. The white image space with the soft whirls is jut as present as the exploding nail flower that erupts in the sky like a firework rocket. All of Uecker’s works are reflections and communication means of his experiences and sensations, he constantly comments on current events in the world, he lives in the present age and takes active participation in the world around him. The year that this work was made marked a turning point in German history. The significant year 1990 must have been deeply moving for the native of Mecklenburg-West Pomerania in the former GDR, as he had always felt a close connection with his home region. After he had left his hometown of Wustrow in 1955 it was the first time that was able to return. Ever since he regularly spends time in the landscape of his childhood. The work offered here emanates the euphoria and emotionality of the eventful days of the reunification. [SM]
More Information
+
Sell
Get a free appraisal for a similar object!
+
Register for
Günther Uecker
+
Buying from A-Z
+
Contact a specialist
+
Günther Uecker Biography
Share