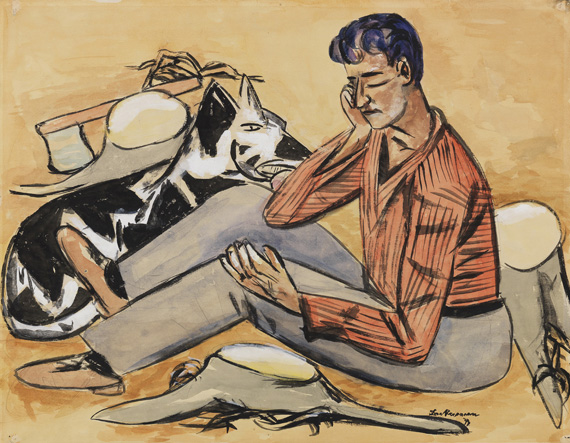 • Made in 1933 - a year of great importance for Max Beckmann.
• A watercolor with an enigmatic imagery.
• His gallerist Günter Franke understood the picture's meaning and accepted the picture right after it was made.
• Beckmann watercolors are very rare on the auction market.

Essay
What has happened? A man in elegant summer attire on the ground between three evenly sewn tree trunks. He appears to be withdrawn into himself, his seemingly heavy head resting on his right hand, the left embraces the knee. A black and white spotted dog rests at his side, attentively raising his head, his eyes open. There is an ax behind one of the tree trunks, clearly visible yet apparently of minor relevance. The title “Holzfäller“ (Lumberjack) illustrates an intensive scene that seems to be straightforward and comprehensible at first sight yet hard to decode upon closer observation. As so often, Max Beckmann invites the observer to follow him on the journey through his world of symbolism. The young man’s posture is striking, presumably a reference to Albrecht Dürer’s masterpiece ”Melencolia I“ from 1514: An angelic figure, obviously on the brink of despair, accompanied by a putto, a dog at his feet, tools all around him, astronomic devices, sphere and polyhedron dominate the scene. On the distant horizon Dürer shows a fascinating interplay of a rainbow and a bright star. Beckmann is well aware of the etching’s significance, perhaps he had read the acknowledged explanations of the scene from Erwin Panowsky and found his own current situation reflected in Dürer’s allegory. The light of Saturn shines onto the melancholic and thus becomes his tragic theme, the ingenious artist who finds himself in a state of mind similar to that of the angel, unable to do anything. Is that what it is? Is it Beckmann himself who sits in deep melancholy between three sawed off trees, unable to work? Sure, the watercolor was made in a time characterized by great uncertainty for the artist. The Nazis had banned him from his teaching post at the Städel school in 1933. He left Frankfurt and moved to Graf Spee-Straße in Berlin. But was he really unable to work? Did he not make such astounding paintings like ”Der kleine Fisch“ (Göpel 373), ”Selbstbildnis im großen Spiegel mit Kerze“(Göpel 380), ”Geschwister“ (Göpel 381) that very year? Or think of the expressive watercolorslike ”Frauenkopf (Colette)“, ”Der Mord“ or ”Odysseus (Odysseus und Sirene)“! And right in between Beckmann was occupied with this watercolor he titled ”Holzfäller“. We well know how often Beckmann made his own face, his own nature subject of a scrutinizing self assessment in many different ways. Theater or circus stages offer the perfect setting for his appearances, and at times he follows the events as a silent observer in order to stage his own creation as self reflection with a skeptical look and strong-willed facial expression so tragic and melancholic notions clearly echo. Is this introvert and dreaming young man really Beckmann himself? Isn’t he more of beau like the young men by the sea once were? The dog, a kind of German shepherd with a fanciful fur texture which the painter saw in Bois de Boulogne in Paris and depicted in the painting ”Mädchen mit Hunden spielend“ (Göpel 382), or just a hellhound with an aggressive zigzag pattern baring his teeth? Or is the monochrome brown paper a reference to the political color prevailing in those days? And the ax, obviously the proper device to cut down a tree, however, the act would never lead to such smooth and accurately cut-off stumps? Is it just ‘pieces’ from a dream? The end of a successful time in Frankfurt, in Paris, a point where the artist found himself in an other-directed situation? In the end Beckmann, and that is not the Max in 1933, in a sort of allegory of time, caught in a traumatic situation and in peril: the trees have been chopped down but the ax is still hot ..? The watercolor ”Holzfäller“ can only be unscrambled on the surface, as the emotional events that Beckmann hints at without disclosing further details reach into realms of depth psychology. From Berlin Beckmann wrote to his gallerist Günther Francke in Munich on February 3, 1934 : ”put on display occasionally: ..the watercolor Holzfäller..". (M.Beckmann an G. Franke am 3.2.1933, Briefe II, no. 623, p. 240) Francke soon made the work sure for his gallery soon after it came into existence. [MvL]
More Information
+
Sell
Would you like to sell a similar object?
+
Register for
Max Beckmann
+
Preview & Auction Procedure
+
Bidding Options
+
Bid by telephon / written
+
Buying from A-Z
+
Catalogue Order
+
Contact a specialist
+
Max Beckmann Biography
Share 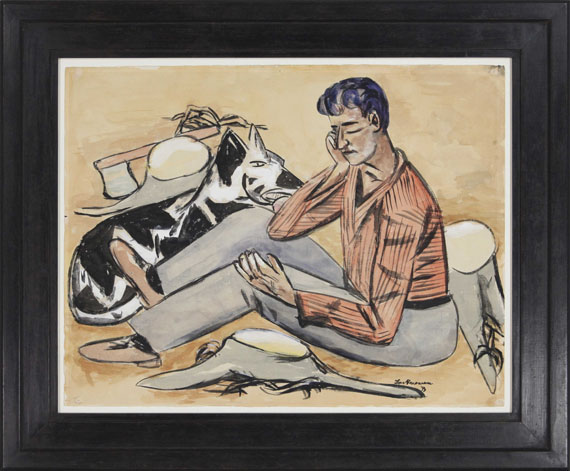 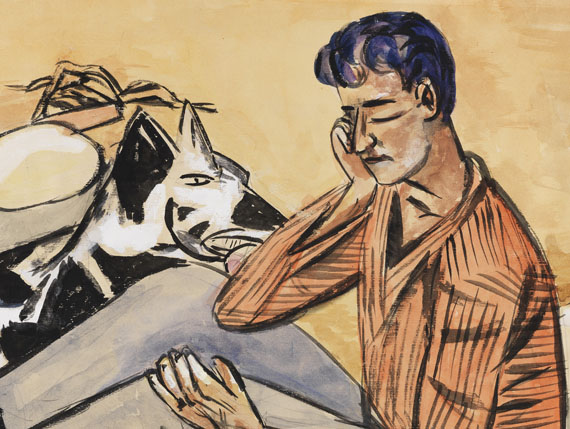 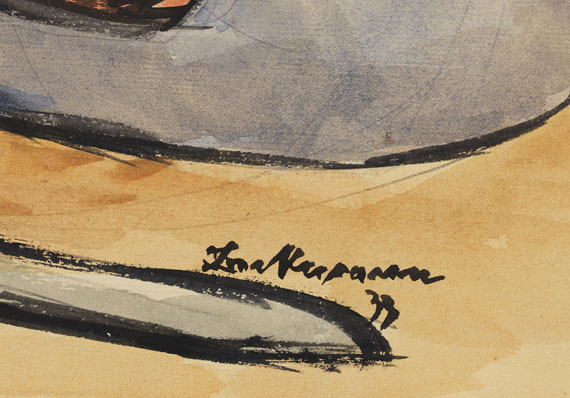 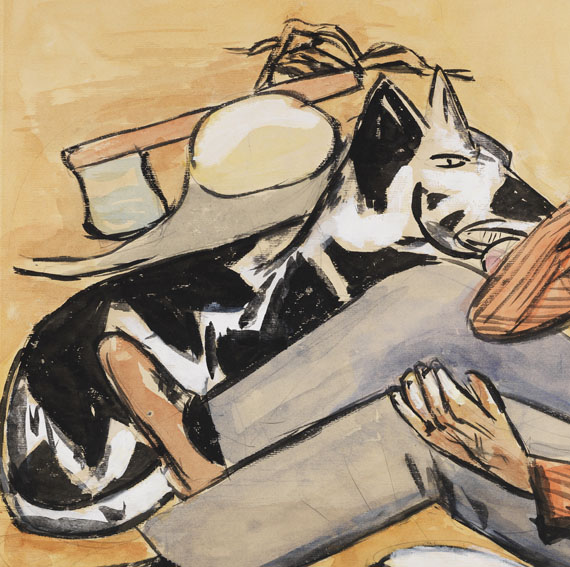 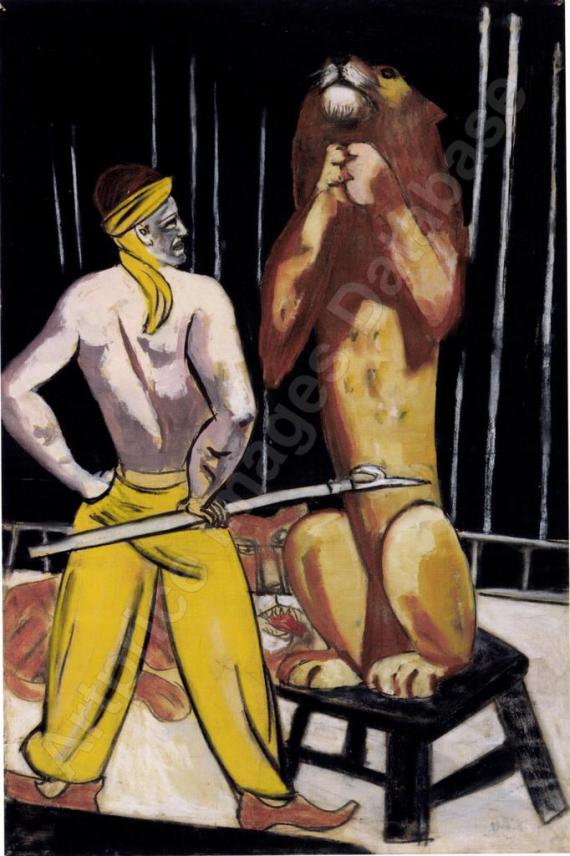 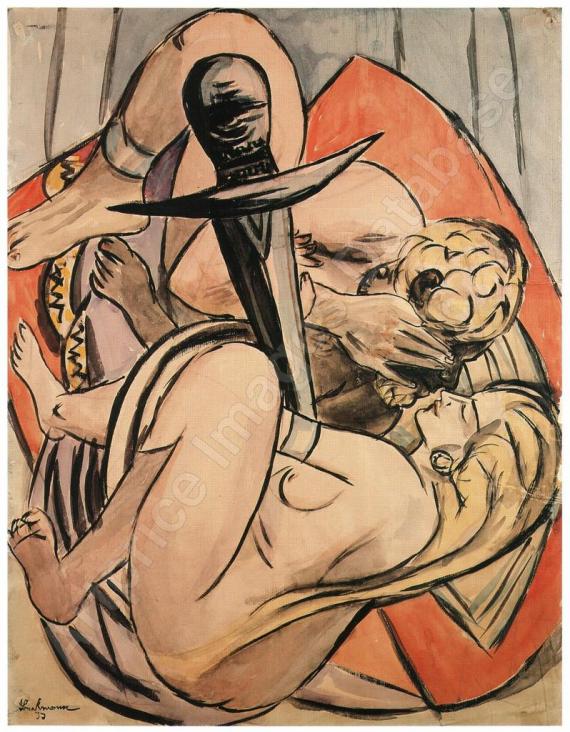