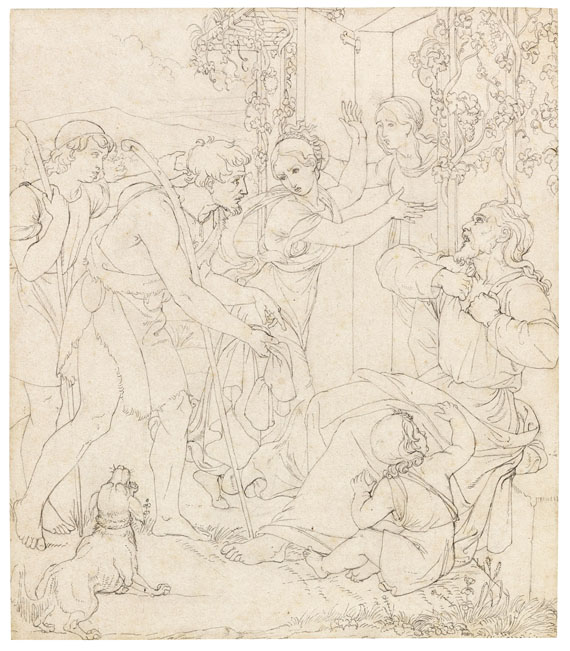 • Draft for the fresco at Casa Bartholdy in Rome, which helped the group of the Nazarenes to their breakthrough
• Rediscovery of the third draft for to date two known preliminary drawings and one on cardboard.

PROVENANCE: Collection of royal construction superintendent Hermann Kirchhoff (1825-1890), Grimmen / Marienwerder / Koblenz (the work was pasted in his private sketchbook which was made between 1857 and 1882).
Private collection North Rhine-Westphalia.

"My courageous compatriots (the young artists) are as if they were revitalized - the matter finds strong support; Canova, Cammucini, Landi express their approval in speeches and letters. Count Blacas now wants the French Academy to be painted as a fresco. This way I realized with little effort what the local academies had not been not able to put up for a long time. " Jakob Ludwig Salomon Bartholdy to Fanny von Arnstein, Rome 1816, quote from: Frank Büttner, Peter Cornelius. Fresken und Freskenprojekte, vol. I, 1980, p. 97.

Essay
In May 1816 the Berlin diplomat Jakob Ludwig Salomon Bartholdy (1779-1825), who had been appointed Prussian consul general a year prior, commissioned a group of young and at that point still unknown artists to decorate the parlor of Zuccari Palace where he resided in an apartment. Around 1810 a group of art students around Friedrich Overbeck left the Vienna Academy and made the empty Franciscan monastery of Sant ’Idisoro at the foot of Pincian Hill their home. Their objective was to revive religious painting in the spirit of classic beauty. Other young German painters would soon follow them, among them were Peter Cornelius, Wilhelm Schadow and Philipp Veit, the group eventually went down in art history as the “Nazarenes”. The group‘s breakthrough was largely owed to the support of Bartholdy. After his efforts to help the artists to commissions from the Prussian government and from wealthy individuals were not crowned with success, he commissioned Cornelius, Schadow, Veit and Overbeck to adorn the representative reception room with Pompeian-style arabesques. Overbeck, who had received a sound education in humanities and religious studies, convinced him to decorate the parlor with paintings showing scenes from the Bible story of Joseph from the Book of Genesis, a theme Overbeck and Schadow had already been occupied with in drawings and paintings in the motif of "dream interpretation" around 1814/15. For the six-part cycle of the visually stunning, dramatic narrative, Schadow took the scenes "Dream of Joseph in prison" (Genesis 40) and the “Coat of many colors“ (Genesis 37), for which this drawing represents an intermediate stage in the preparation of the fresco's final composition, which must have been completed in April 1817. In addition to Schadow‘s fresco, there is also a version on cardboard, in possession of the Lower Saxon State Museum in Hanover, a composition drawing of an earlier version heightened with opaque white, and a study showing Jacob tearing his shirt and the pained young woman running off (Dresden, SKD, Kupferstich-Kabinett). Made between the earlier draft and the version on cardboard and the executed fresco, respectively, this drawing offered here provides interesting insight into the artist‘s process of pictorial invention: Schadow initially worked out some minor details like the dog collar or the ornamental wine tendrils in the background in order to reduce the fresco‘s richness of details and the scene‘s degree of reality in support of a focus on the characters‘ emotional expression. The precise lines of the pen drawings, a technique that is a rare occurrence in Schadow's oeuvre, suggest that this is a relatively advanced sketch and the link between the hitherto known draft and the final version.
More Information
+
Sell
Would you like to sell a similar object?
+
Register for
Friedrich Wilhelm Schadow
+
Buying from A-Z
+
Contact a specialist
Share 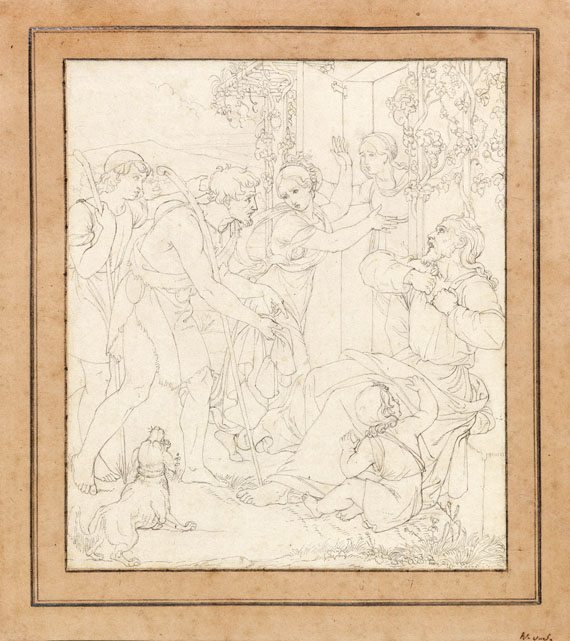