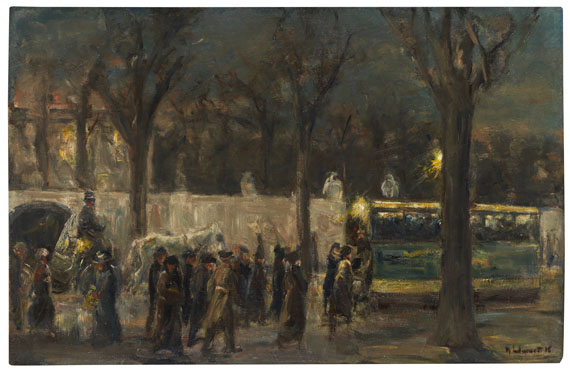 • Max Liebermann paints a street scene singular in his work: a rare Berlin view at night.
• Liebermann, the naturalist, documents an everyday evening scene not far from his studion in the midst of the First World War.
• With just a few nuances the artist renders the scene in parallel layers in a slightly aslant view without personal distance and with great virtuosity that reaches all the way into the background.

Essay
Max Liebermann painted a street scene on an evening in winter, street lanterns shine their dim light on the scene. Pedestrians stroll in different directions under the bald trees. A cab in left passes an oncoming tram, the encounter with industrial progress. In the background we see a high wall with decorative vases behind which defoliated trees tower into the dark sky. At the end of 1916, the year before Liebermann turned 70, nothing seems to point to a time that would be so difficult for many people during the First World War, Although the German Army Command had opened its campaign on the Verdun fortress at the beginning of the year, while the endless suffering in the trenches had already lasted for a year - horrors that Otto Dix captured in haunting drawings - and the food was drastically rationed for the Berliners, people apparently follow their daily routines.
In 1916 Liebermann obviously painted less. He made portraits of public figures such as Field Marshal Karl Wilhelm Paul von Bülow or the publisher Samuel Fischer and a number of self-portraits in different poses. And he painted this street scene, one of the few for which Liebermann chose this subject. What seems to be most astonishing, however, is Liebermann's view of the evening hustle and bustle near his studio on Pariser Platz. He does without the typical perspective that we know from the many Berlin street scenes of, for instance, Lesser Ury. Liebermann layers what he sees in a slightly oblique view, parallel to the background with no distance of his own: a light wall and a tram going past. The passers-by make for their destinations along the tree-lined avenue, no pausing, no resting. Liebermann may have come across this scene on an evening stroll along Königgrätzer Strasse, just behind his house near Brandenburg Gate in the direction of Potsdam Square, along the so-called ministerial gardens with the stately buildings housing the ministries, opposite the zoo. After the end of the 'Austro-Prussian War' against the armies of Austria and Saxony, the name of the "Sommerstrasse", formerly named after the city councilor Carl August Heinrich Sommer, was renamed in 1867 to commemorate the victorious battle of Königgrätz on July 3, 1866. At that time, perhaps at the end of November, when Liebermann took the evening stroll there, the street was already called Budapester Strasse; renamed for the alliance with Hungary in 1915. After the death of Reich President Friedrich Ebert in 1925, the street name was changed again in his honor. After eight years, right at the beginning of National Socialism, the new regime honored the NSDAP Reichstag President Hermann Göring by renaming the street again. In the post-war period the street marked the border between the British and Soviet sectors, and in 1961 the Berlin Wall was built along former Königgrätzer Straße. Today, Ebertstrasse connects Potsdamer Platz with Friedrich-Ebert-Platz right behind the Reichstag building.
Liebermann, the naturalist, paints a daily recurring evening scene, the lights are reflected on the wet asphalt, while the hurrying people enliven the scene. This is an unusual motif for this renowned artist, whose official portraits are among the most sought-after in Berlin's society. His pictures of the private garden around his Wannsee villa, teeming with impressionist colors inspired by the flower beds, stand in clear contrast to this special and probably unique night picture, seen not far from his Berlin studio on Pariser Platz. [MvL]
More Information
+
Sell
Would you like to sell a similar object?
+
Register for
Max Liebermann
+
Bidding Options
+
Written bid
+
Buying from A-Z
+
Contact a specialist
+
Max Liebermann Biography
Share 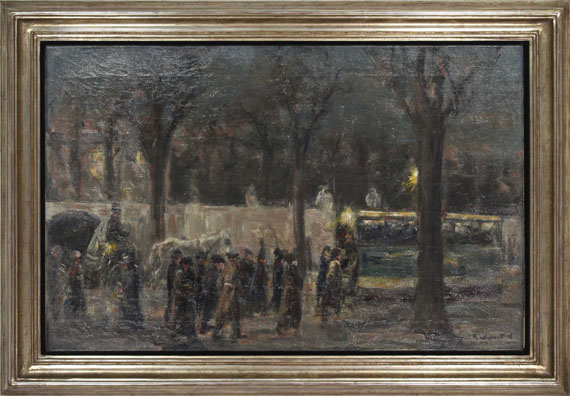 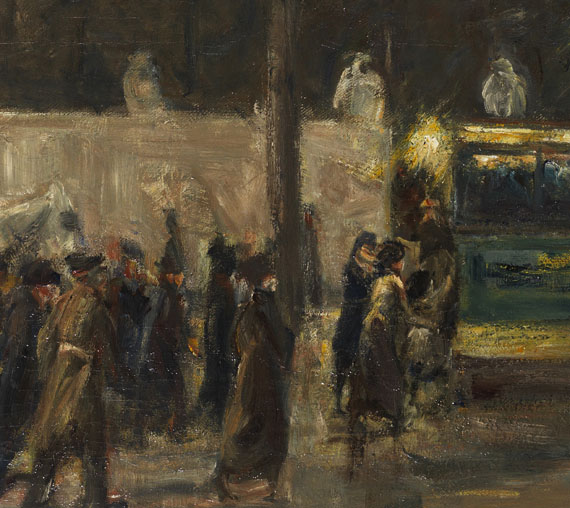 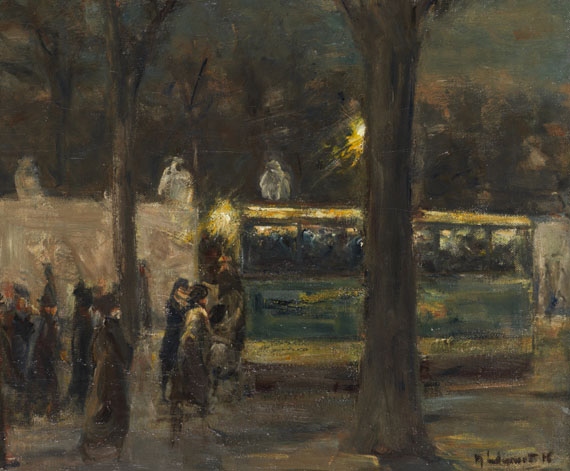 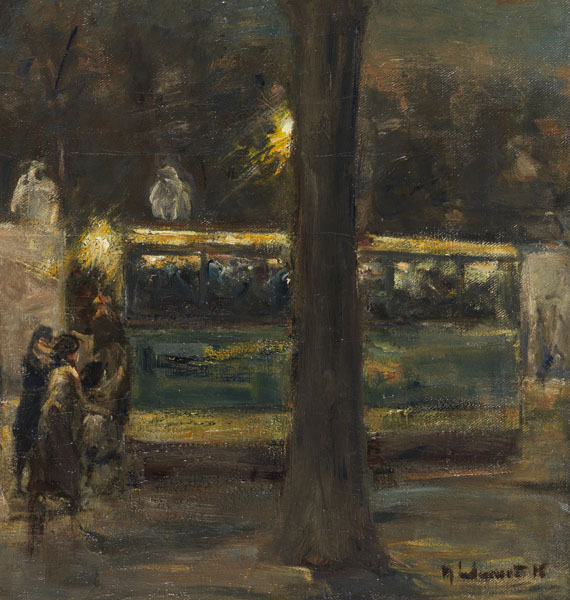 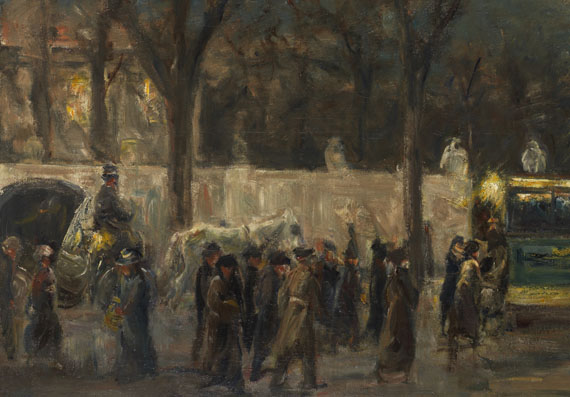 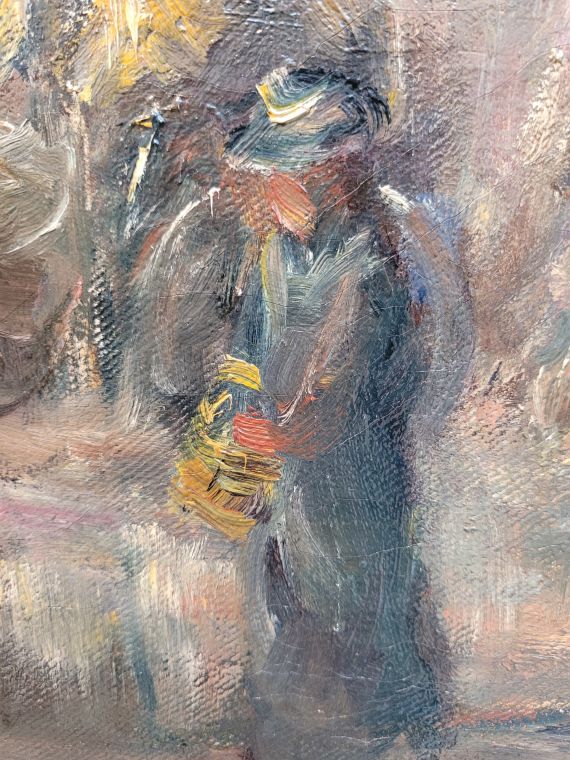 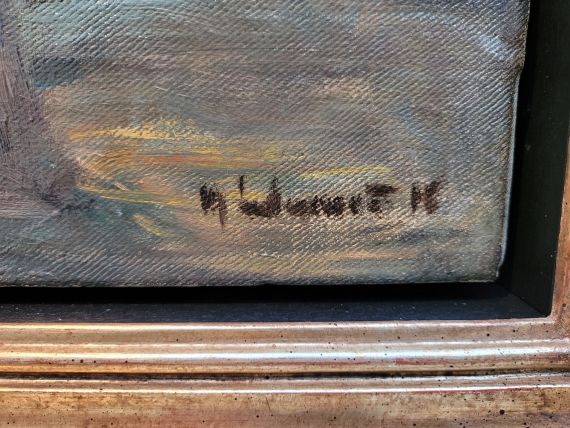 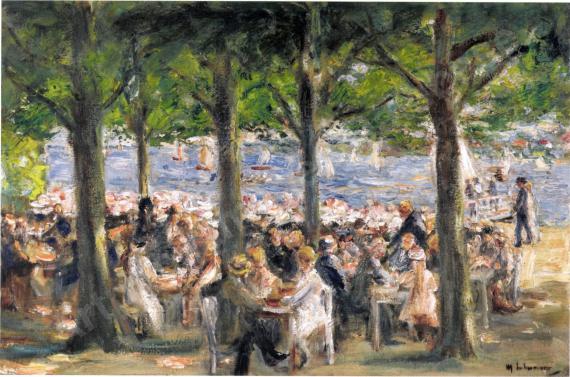 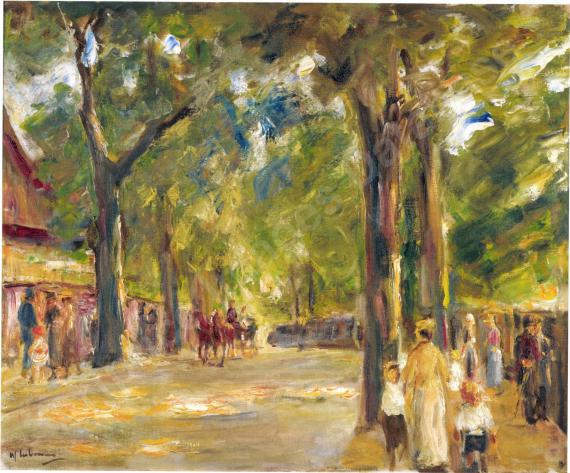 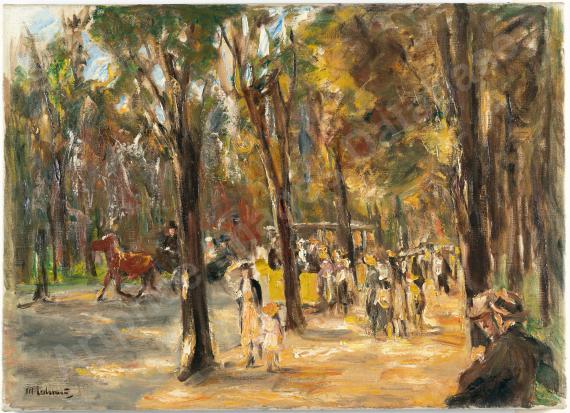