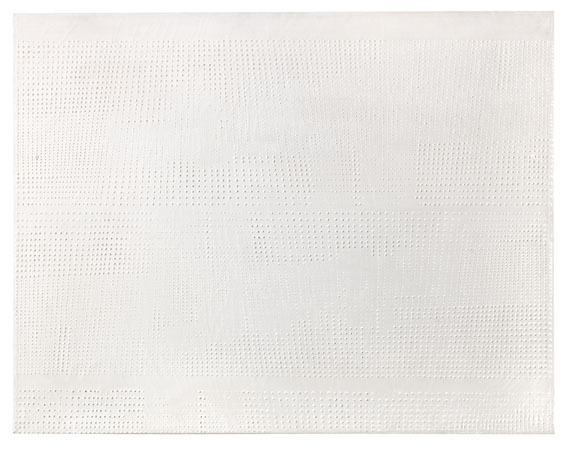 • Typical work in "ZERO" white by the "ZERO" protagonist Otto Piene
• Part of the important work series "Rasterbilder" (‘Grid Pictures‘, as of 1957) from the early "ZERO" days (1958-1966)
• 1959: The year of the most important "ZERO" exhibition: "Vision in Motion - Motion in Vision" (Hessenhuis, Antwerp)
• The same year Piene participated in a Documenta (2) exhibition for the first time
• Other works by the artist are in possession of, among others, the Museum Folkwang, Essen (Sensibilité prussienne, 1960), the Städel Museum, Frankfurt/Main (Rasterbild, 1959), the MoMA, New York (Untitled, 1959), and the Centre Pompidou, Paris (Pure Energy III, 1959).

"Initially Zero was brushed aside an an absurd anomaly from the prevailing art tendencies. Now we brought the message into the world."
Otto Piene, 2013, quote after: Comeback des Feuerkünstlers, Handelsblatt (online), February 5, 2013

Essay
As a co-founder of the artist group "ZERO" and one of the great pioneers of international light art, Otto Piene is one of the "great vanguard artists of the German post-war era" (Zeit Kultur). In the mid-1950s, when the German and European art scene was largely dominated by Informalims and Tachsim, Otto Piene and Heinz Mack dared to take a new approach in 1957: They demanded a more reduced, purified art that was liberated from the subjectivity of the individual and which they saw as the synthesis of nature and technology and which, in their opinion, should not only evoke feelings, but also appeal to the viewer's reason. They wanted to contrast the dramatic, expressive and often gloomy images of the contemporary Informalism with a luminous and quiet art. Piene wrote: "In 1957 I felt troubled by the strange tendency of contemporary art towards an opaque darkness, so I began to paint pictures that were supposed to reflect the light in as much perfect purity as possible. They were white and yellow and made the light visible as a force characterized by a subtle steadiness." (Quote from: ex. cat. Heinz Mack, Otto Piene, Günther Uecker. Zero, Hannover 1965, p. 127). Over the years "ZERO" brought together artists such as Yves Klein, Lucio Fontana, Piero Manzoni, Enrico Castellani, Jean Tinguely and Jan Schoonhoven, who had significant influence on the art of the "ZERO" group and who, in return, gained important impulses for their own artistic creation.
In 1959 Otto Piene created the first so-called raster (grid) images, which, due to their semi-mechanical production and bright colors, met the “ZERO” requirements. Piene's goal was to create a painting of light, to elevate light to the actual content of the picture: "My pictures should be bright, brighter than the present world." (Heinz Mack, Otto Piene and Günther Uecker, Zero. Der neue Idealismus (Manifesto), 1963). The work offered here can also be assigned to the "grid images", which were created almost mechanically, without the artist having to apply the paint onto the canvas with a brush. Instead he used a puncher chisel to punch small holes into metal or cardboard plates in different constellations, sometimes as rhythmic strips, sometimes as sweeping circular formations, through which he then squeezed the paint. This way the paint ends up on the image carrier, previously primed in the same color, in form of small protruding matrix dots analog to the plate’s perforation. In their multitude, these dots, which Piene calls "individual forces", set the respective work in vibration and oscillation as soon as the electric light (or daylight) shining onto the grid is reflected by the bright color. This integration of the natural energy of light creates a force field that is then transferred to the viewer's energy and is intended to arouse sensations. Piene and the "ZERO" artists deliberately used those colors in their pictures that reflect particularly well and thus have a high light and energy value, in particular white, yellow, silver and gold tones. In a speech Piene delivered on the occasion of an exhibition opening in the Kaiser Wilhelm Museum in Krefeld he explains: "We were attracted by the spotlessness of the white. We saw purity and light in it. We had experienced enough gloom, confusion and darkness. / We tried to experience the white and to make it tangible by making it vibrate through the grids. The relief of the ordered surface gave the light the opportunity to show itself in opposition to shadow." (Quote from: ex. cat. Heinz Mack, Otto Piene, Günther Uecker. Zero, Hanover 1965, pp. 133 f.).
In the "Rasterbild" from 1959 offered here the artist's innovative and creative power, his understanding of art and the ideals of the newly founded group "ZERO" found realization. The grid pictures and their purpose-built grid screens soon inspired Piene to create more innovative works. The same year he developed the "archaic light ballet", in which he so to speak "paints" walls with light, using lamps and foils to let light shine through the holes in his grid screens. Still the same year he made yet another bold experiment with his "smoke pictures" and for the first time used smoke and soot on his grid screens. These works eventually led to his famous "fire pictures". This list alone delivers proof of Piene’s creative power and unwavering creative in the late 1950s and shows the significance the year our work was made had for his entire oeuvre. In 1959 the seminal exhibition "Vision in Motion - Motion in Vision" was shown at the Hessenhuis in Antwerp, in retrospect it probably was the most important "ZERO" exhibition of all. [CH]
More Information
+
Sell
Would you like to sell a similar object?
+
Register for
Otto Piene
+
Buying from A-Z
+
Contact a specialist
+
Otto Piene Biography
Share 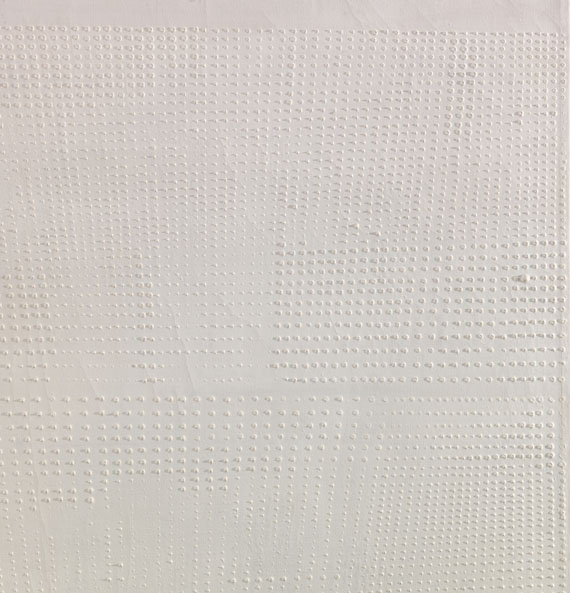 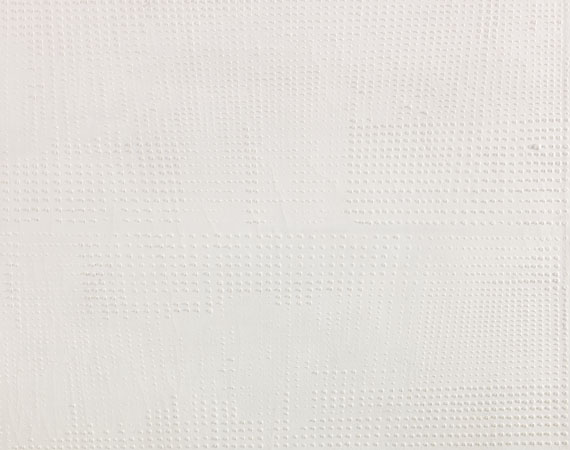 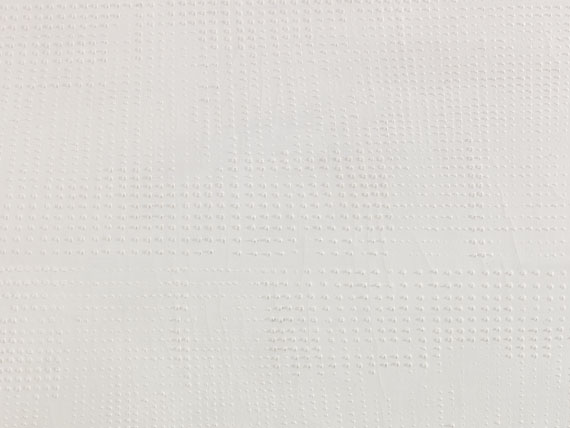 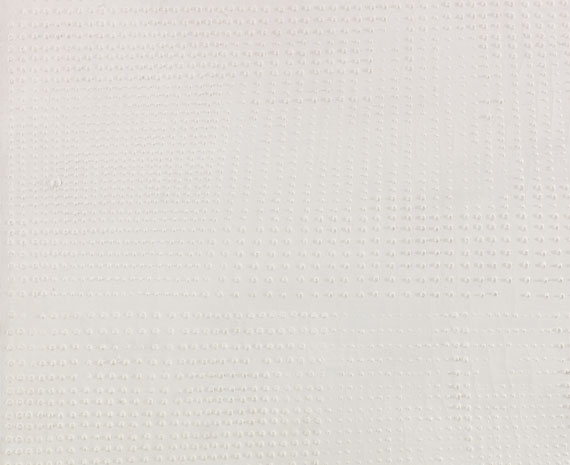 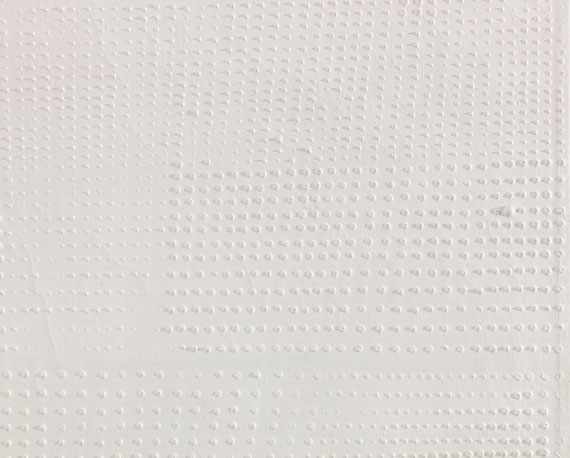 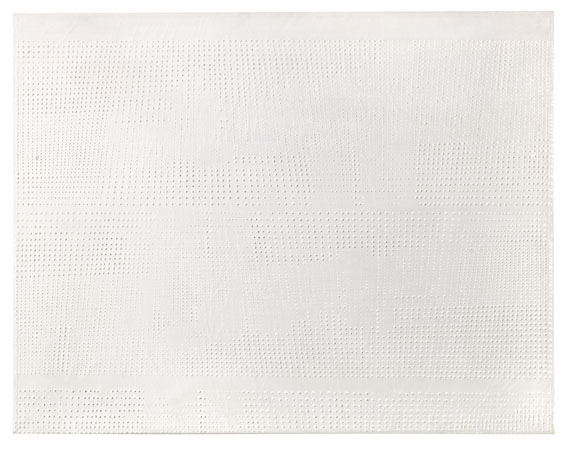 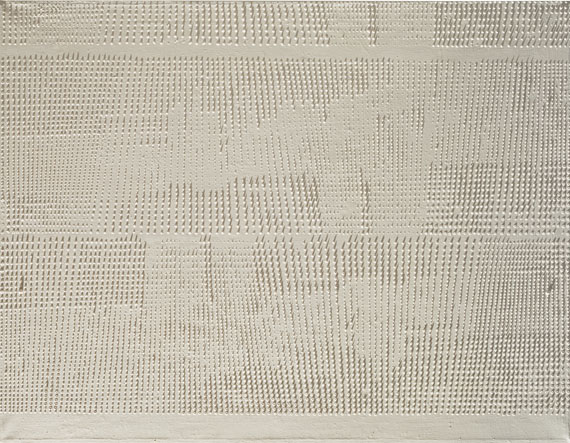