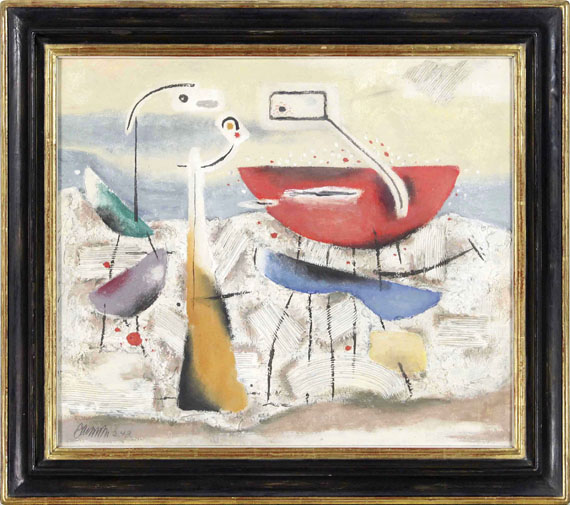 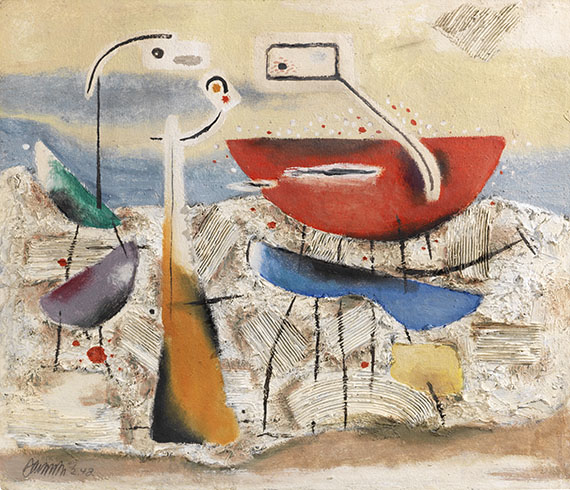 207
Willi Baumeister
Metaphysische Landschaft, 1948.
Oil with synthetic resin and filler on board
Estimate:
€ 50,000 / $ 49,500
Sold:
€ 162,500 / $ 160,875
(incl. 25% surcharge)
Metaphysische Landschaft. 1948.
Oil with synthetic resin and filler on board.
Beye/Baumeister 1402. Signed and dated "2.48" in lower left (the barely legible added "3", as mentioned in Beye/Baumeister, is not visible in the original work). Verso titled and dated "1948". 45.5 x 53.2 cm (17.9 x 20.9 in).
The artist's diary (p. 634) contains a small sketch of the work dated "Jan. 48".
• Early composition from the series "Metaphysical Landscapes",which is considered the highlight in Baumeister's lyrical and merry post-war creation.
• Particularly fine example of Baumeister's creation which oscillate between abstraction and figuration.
• By using synthetic resin and filler Baumeister attains a remarkably haptic surface which underlines the prehistoric character of his archaic repertoire of forms.
• Similar works from this series are in renowned collections like, among others, the Centre Pompidou, Paris, the Hamburger Kunsthalle and the Städelsche Kunstinstitut, Frankfurt a. M..

"The 'Metaphysical Landscapes', of which the artist must have made the first in 1946/47, are a highlight of his development in the 1940s [..]"
Peter Beye, quote from: Beye/Baumeister, Willi Baumeister. Catalog raisonné of paintings I, p. 18.

As early as in the early 1930s Baumeister showed interest in structures that could add a loosened and lively surface to the pictorial ground. As it is the case with this present painting from the series of works called "Metaphysischen Landschaften" (Metaphysical Landscapes) the ground becomes carrier of a mostly linear, graphic composition that shadowy spooks over the pictorial ground. Primeval associations are evoked, a phenomenon that Baumeister includes as a fundamental theme in many of his work cycles. The loosely arranged shapes and colored surfaces convey a cheerful weightlessness that leaves room for all kinds of associations. Associations with musical tempi often determine the work. In this work the primeval is dressed in a burlesque robe and thus relieved of all sensory weight. The subtle humor that accompanies this composition is reflected in the delicate playful manner in which the shadowy figures move across the composition. By using synthetic resin and filler, Baumeister achieves a plaster-like structured surface effect, which underlines the prehistoric character of the presented, archaic-looking repertoire of forms. Especially in comparison to the similarly relief-like, but rather dark colored "Figurenlandschaften" and "Figurenmauern" (Figure Landscapes and Figure Walls) from the early 1940s, the "Metaphysical Landscapes" of the post-war years, of which our cheerful composition is a prime example, "impress with their relaxed structure and the colors‘ radiance" (Peter Beye, quote from: Beye / Baumeister, Willi Baumeister. Catalog raisonné of paintings I, p. 18). Up until 1954 Baumeister varied the subject of the "Metaphysical Landscape". A "Metaphysical Landscape" from 1954 (Beye / Baumeister 1438) changed owners in London in 1997 and has since been considered the second-highest Baumeister hammer price on the international auction market with a result of almost 450,000 euros. [JS]
More Information
+
Sell
Get a free appraisal for a similar object!
+
Register for
Willi Baumeister
+
Buying from A-Z
+
Contact a specialist
+
Willi Baumeister Biography
Share