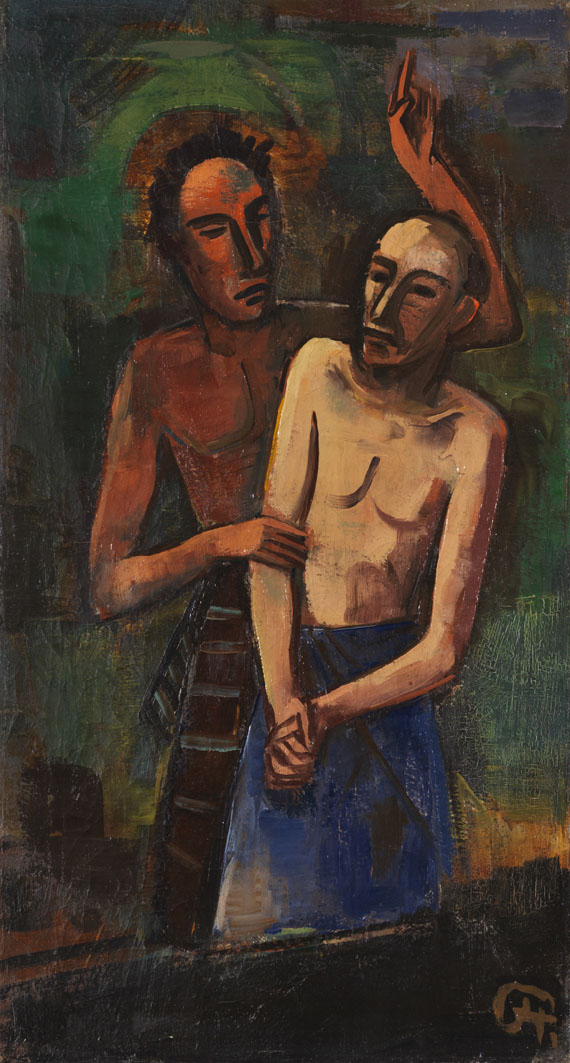 • Unusual and utmost rare format
• Particularly colorful work from Hofer's early period of creation.
• Shown in several exhibitions as early as in the 1920s, among them with the Berlin Secession.

In the year the work offered here was created, Karl Hofer was able to gain a foothold again in Germany. It was not before May 1919 that he return to his home country after spending some time in the prison camp in Carnac Plage in Brittany and several years in Zurich and Ticino. In 1922 he was appointed to the Berlin Art School, in 1923 he became a member of the Prussian Academy of the Arts, followed by his first exhibitions at the Academy of the Arts and at Flechtheim Gallery in Berlin. In 1924 he even exhibited at the Carnegie Institute's International Exhibition of Paintings in Pittsburgh. During these years his work underwent a change. The impressionistic elements were given up in favor of a more matter-of-fact, more mature painting style. The focus of his art was also on people during these years, he wrote: "[.] the central problem of visual arts is and remains man and the human" (quote from: ex. Cat. Karl Hofer, Von Lebensspuk und stiller Schönheit, Hamburg 2012, p. 126.). Hofer's imagery, which often directly referred to current events, is also based on Christian or mythological representations. Both this work offered here, as well as the painting "Sibylle", which is also offered in this auction, are impressive examples thereof. This painting is reminiscent of traditional depictions of John the Baptist as they appear in Leonardo da Vinci's oeuvre (1513, Louvre / Paris). Referring to the passage in Mark 1.15 ("The time is fulfilled, and the kingdom of God is at hand. Repent and believe in the gospel!"), John the Baptist points up to heaven as if he wanted to ask the viewer to believe in God and the gospel. The apostle John, known as a doubter, is also shown in Leonardo's famous Last Supper fresco with this finger pointing to heaven (Santa Maria delle Grazie, Milan). The painting "Zwei freunde" (Two Friends) made year later and today at the Frankfurt Städel, has a very similar motif and reveals its religious reference by its title affix "David and Johannes". While Hofer explores a much more intimate, almost homoerotic relationship with the portrayal of the two men in the Frankfurt picture, what interests him in the work offered here is the compositional connection of a facing and an averted body. The posture of the person shown on the right appears dismissive at first, but he still folds his hands as if in prayer. The imbalance of closeness and distance adds a noticeable moment of bewilderment to the picture. In combination with the figures‘ typical sculptural rigidity, the hard contours and the strong light-dark contrasts, as well as the renunciation of a definable, narrative environment, this work is an extremely characteristic figure picture with a high recognition value. [CH]
More Information
+
Sell
Get a free appraisal for a similar object!
+
Register for
Karl Hofer
+
Buying from A-Z
+
Contact a specialist
+
Karl Hofer Biography
Share