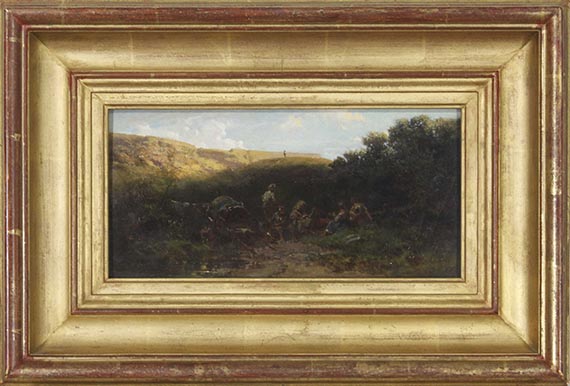 The work is sold subject to the amicable agreement with the heirs after Olga Mengers on basis of a just solution. No pending restitution claims.

Carl Spitzweg. “His name alone evokes a sense of sunny well-being and his outstanding talent as a painter is no longer in dispute; we just have to admire this talented inventor of rare ingenuity in the history of art. Although he is first and foremost a landscape artist, few modern landscapers have brought nature to life with such ingenious and striking human and animal accessories. One might easily mistake the accessories for the main thing, even though they are usually intended merely as a means of conveying the mood, as the ultimate point of the landscape theme. […] In “Thunderstorm”, a small group of fleeing peasants adds the defining urgency, a landscape of bare hills punctuated by a family of resting carters or gypsies who observe a policeman approaching from far back beyond the hills. Here it is the subtle gift of humor that makes the picture come alive [..]” This is how the authoritative art critic and writer Fritz von Ostini aptly described the outstanding quality of Spitzweg's painting “Lagernde Karrner” (Carters at Rest) for the auction of the Schmeil collection in 1916: It is the cheery tongue-in-cheek humor in this everyday scene that gives the painting its special appeal. Spitzweg even contrives to make the landscape “speak” for itself: By contrasting light and dark, open and concealed, above and below, the sunlit mountain ridge and the shady resting place by the water, bordered by shrubbery, add another level to the anecdotal narrative of the figures’ characters.
Not surprising then that this subtle work of art found a home in various distinguished houses. Until 1916, for instance, it was part of Carl Hugo Schmeil’s renowned collection. When the commercial councilor’s collection was liquidated by auction in Dresden in 1916, the Helbing/Cassirer catalog appeared in a richly illustrated grand edition, with the auction itself generating a great deal of interest. Among the bidders was the eminent judge at the Berlin commercial court, Dr. Alfred Mengers, who acquired “Lagernde Karrner” for the hefty price of 7,000 marks.
Alfred Mengers, head of the family-owned “Velvetfabrik M. Mengers & Söhne” in Berlin, lived with his wife Olga Henriette in a large villa at Buchenstrasse 6. Olga, for her part, came from a wealthy family and had inherited an art collection from her father, the important Kassel-based entrepreneur and city district designer Sigmund Aschrott.

After 1933, Olga Mengers, now a widow, and her art dealer sons Heinz and Kurt faced persecution by the Nazis. Although a baptized Protestant, Olga Mengers was classified as one-hundred percent Jewish according to Nazi racial doctrine and was driven to ruin by the National Socialists. The velvet factory was “Aryanized”, the paternal inheritance was confiscated for the “Judenvermögensabgabe” (Jewish property levy) and the house was sold. Before long, Olga was restricted to occupying just two rooms of her apartment. Her sons Heinz and Kurt fled Berlin as early as 1938 and 1936, respectively. Like many others of her generation, the elderly mother, whose vision was severely impaired, stayed behind despite the danger. On returning to her apartment from an eye clinic in the fall of 1942, Olga Mengers was arrested and deported to Theresienstadt. Her long-serving housekeeper had to bid the old lady a hasty good-bye in the hallway. Olga Mengers was fortunate to survive the concentration camp and was liberated on July 10, 1945. After returning to Berlin, she died in abject poverty in 1948.
So what happened to the Carl Spitzweg painting? After Olga’s deportation, according to usual National Socialist practice, all household effects including the collection of paintings were sealed, inventoried and “utilized”. As it happened, Spitzweg’s painting along with several other valuable paintings did not appear in the lists compiled by the Nazi henchmen, although the sons Heinz and Kurt were certain that Spitzweg’s small, rectangular “Landscape with Figures” had still been in the apartment.

What actually happened to the painting remains a mystery. Was it among the pieces of furniture and works of art from the sealed apartment that were offered “underhand” to high-ranking military officers and private individuals? Or was the small, valuable item part of Olga Mengers’ “air-raid bag”? Individual items from her bag went undiscovered during her deportation and were later taken to apparent safety in southern Germany, but not all of them were returned. It is assumed that the painting passed back into private hands before the end of the war, most likely into the collection of a military doctor from southern Germany.
The eventful history of “Lagernde Karrner”, which saw both glorious and dark times, has come to a happy conclusion thanks to a “just and fair settlement” with the heirs of Olga Mengers. There are no outstanding restitution claims connected with the painting and it is offered for sale with the full consent of the Mengers family. [AT]
More Information
+
Sell
Get a free appraisal for a similar object!
+
Register for
Carl Spitzweg
+
Bidding Options
+
Written bid
+
Buying from A-Z
+
Contact a specialist
+
Carl Spitzweg Biography
Share