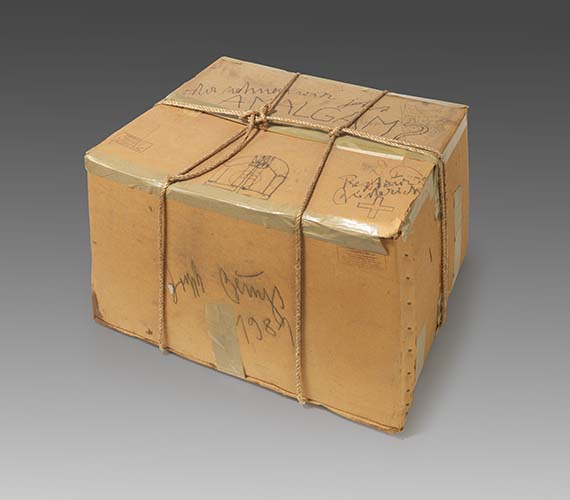 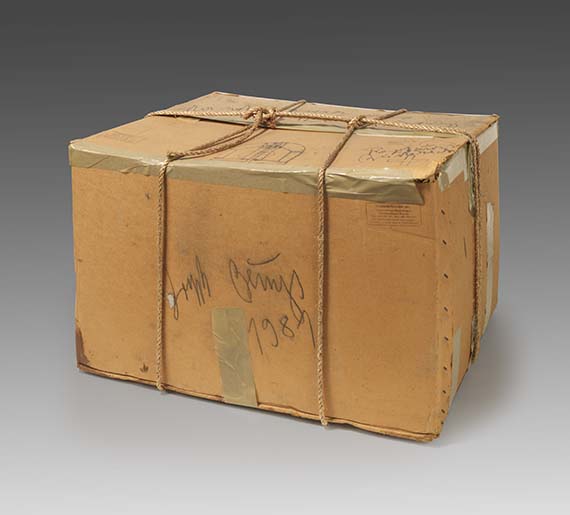 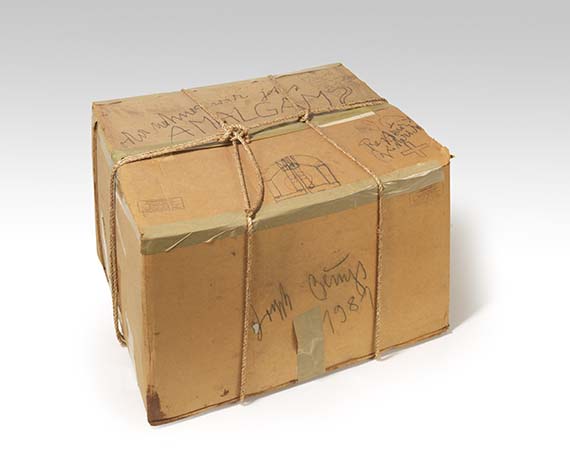 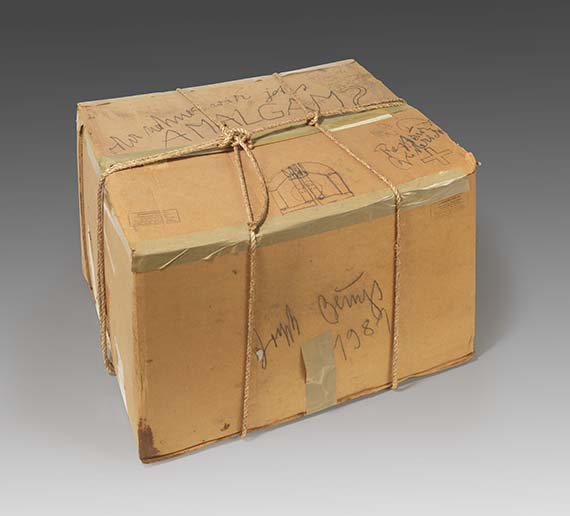 One of the first major sculptural commissions after Beuys had completed his studies was a memorial for the “Old Church Tower” in Meerbusch-Büderich in 1958. The wooden gate, also designed and created by Beuys, had been vandalized over the years. In 1981 Joseph Beuys was occupied with the restoration, with which restorer Hans Althöfer had been entrusted. The sketch on the cardboard shows the gate and the holes circled by Beuys that required mending. Materials for the fillings were discussed, in addition to wood, amalgam, commonly used to fill holes in teeth, was also considered. Since it is an alloy of mercury, its use is controversial. The question “Oder nehmen wir jetzt AMALGAM?" (Or shall we take amalgam?) written in large letters on the cardboard box containing restoration utensils, goes beyond the technical problems. It basically asks for alternatives to impure, toxic compounds. The block of wood served as model for the restoration of the oak gate. Together with the restorer, Beuys was concerned with the question of how the numerous, partly burnt-in holes in the gate could be filled and closed. Holes closed with both wood and amalgam are laid out as test series in the wooden block, to which the designation no. 5 refers. The changes in the material, the color and mounting must have inspired Beuys to sign this object. From the signature an arrow points to one of the filled holes. [Eugen Blume]
More Information
+
Bidding Options
+
Bid by telephon / written
+
Contact a specialist
+
Buying from A-Z
+
Preview & Auction Procedure
+
Catalogue Order
+
Register for
Joseph Beuys
+
Joseph Beuys Biography
+
Sell
Get a free appraisal for a similar object!
Share

Resale right apportionment:
In accordance with §26 of German Copyright Act, a droit de suite charge of 2.4% including VAT is levied for original artworks and photographs for the compensation of the statutory right of resale.
Joseph Beuys - lots sold by Ketterer Kunst
+
all