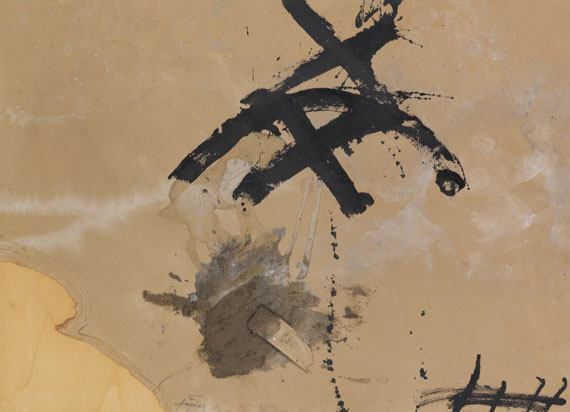 • Antoni Tàpies is one of the most important Spanish artists of the 20th century.
• In the 1960s he developed an innovative and unmistakable signature style characterized by signs and writing, as well as the use of everyday objects.
• Strong presence realized through the work's material properties.
• The year this work was made Tàpies, along with Archipenko, Calder, Giacometti and de Kooning, was represented in the exhibition "From Venus to Venus" at Galerie Beyeler.

Essay
Today Antoni Tàpies’ diverse work has long been considered one of the most distinctive and influential creative achievements of the second half of the 20th century. And no contemporary artist has succeeded in giving inorganic matter such a lightness as he has over the last few decades. Tàpies ’images are haunting, their sheer presence is immediate, the gestural markings are part of his creative process, shaped by the tension between the materials used. Tàpies shows a special affinity for mundane, everyday materials and objects characterized by wear and tear and connected to assemblage-like compositions that appear provocative and enormously stimulating at the same time. In this context the fact that the artist largely dispenses with mimetic illusionism in his pictures and almost exclusively relies on the properties of the materials used, adds a remarkably concrete statement as it is the case here: Tàpies combines two X’s in strong brushstrokes with an elegant arch, while the artist fixates a remnant of the torn, firmly layered, yellowish cardboard with sand, while gestural emotions, anchored in the process, are scattered across the work in a balancing tendency. With this gesture Tàpies is one of those avant-garde artists who began to use innovative, modest and trivial materials in the early 1970s, embarking on revolutionary paths in visual arts, just like Piero Manzoni, whose provocative experiments triggered the Arte Povera movement, or Joseph Beuys’ staged actions which would soon dominate the art scene, or Kounellis whos employed unadulterated materials on his quest to gradually overcome the boundaries of the pictorial plane, the boundary between life and art. Tàpies’ occupation with his own reality caused him to repeatedly bring up fragments of objects, a small detail from the torn-off box like it is the case in this work. The piece of cardboard fixed with sand contains the allusion of a collage and adds a truly magical effect to the work. Even if this work is relatively easy to read, a connection between the characters applied with a quick brush and the location of the bonding is not essential. Tàpies’ works always challenge the observer to determine the content and their nominal value and to read them correctly. The approaches can be complex and sometimes they are not productive. Nevertheless, the suggestive potential in the interplay of the emotional and the rational is characteristic of Tàpies ‘imagery. [MvL]
More Information
+
Sell
Would you like to sell a similar object?
+
Register for
Antoni Tàpies
+
Preview & Auction Procedure
+
Bidding Options
+
Written bid
+
Buying from A-Z
+
Catalogue Order
+
Contact a specialist
+
Antoni Tàpies Biography
Share 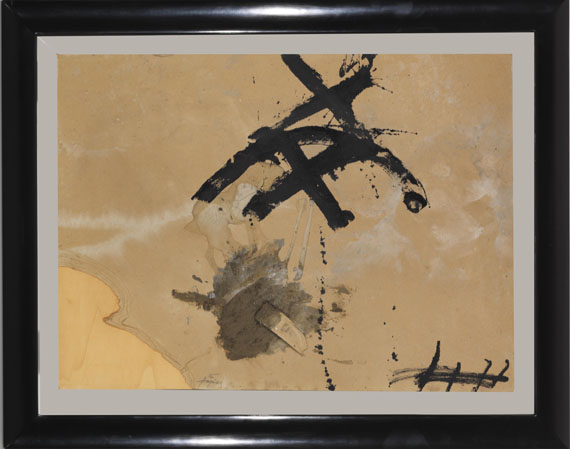 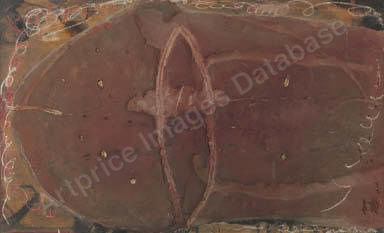