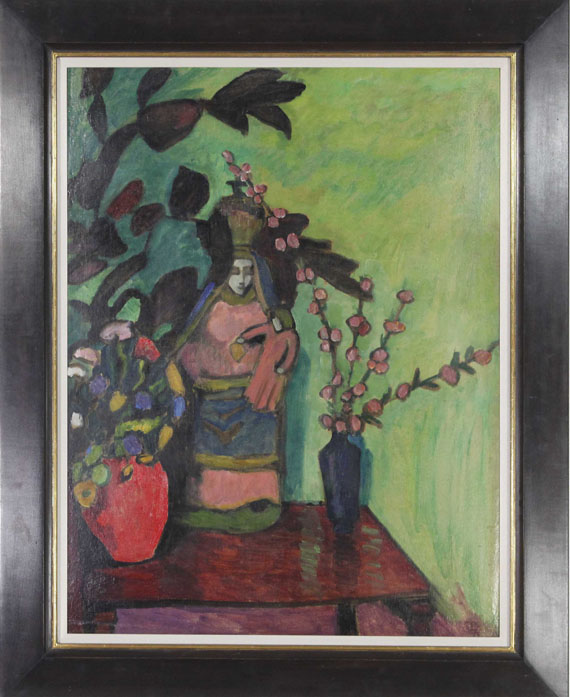 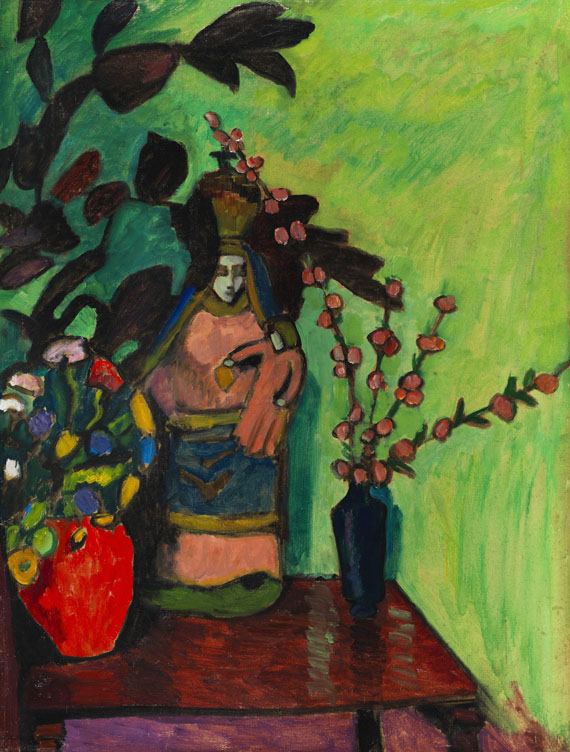 • One of the last large-format pictures by Gabriele Münter from the time of the "Blaue Reiter" not in museum ownership.
• From the founding year of the "Blauer Reiter".
• The comparable work "Stillleben mit heiligem Georg" from the same year is depicted in the Almanac from 1912 and is considered an incunabula of the "Blauer Reiter.
• This work was part of an exhibition at the Louisiana Museum, Humlebæk / Denmark in 2018.
• Gabriele Münter participated in the first documenta in 1955 as one of only seven female artists with “Stillleben Grau” (1910, today at Städtische Galerie im Lenbachhaus, Munich).

"The artist does not create what is in nature, not even what could be in nature. Nature merely serves as a key to the organ in the artist's soul, metaphorically speaking."
A. v. Jawlensky, Das Kunstwerk II, 1948, p. 52 in: Städtische Galerie im Lenbachhaus, Collection catalog 1, Munich 1966.

Many of her paintings and drawings show how inspiring traditional folk art was for Gabriele Münter. Even today, many of the figures and pictures shown can be identified in the collection that Gabriele Münter and Wassily Kandinsky compiled with great commitment. The couple bought the devotional folk objects and the objects of utility in typical regional make at markets or brought them home from their journeys. In their apartment on Ainmillerstraße 36 in Munich and their Murnau house, which her friends soon referred to as the “Russenhaus” (Russian’s House), the walls were full of reverse glass paintings, carvings, clay jugs, toys and figures of saints were grouped on shelves and tables. The "artist collection", which offers inspiration and in which the view of a "simple life" was coupled with the search for the "spiritual in art", also includes a copy of the "Ettaler Madonna", exactly that figure shown in our picture. The Ettal Abbey in the Ammergau Alps is just a few kilometers away from Murnau and the Madonna can be clearly assigned for baby Jesus on Mary's left knee. In Gabriele Münter's paintings pieces from the collection appear not only as accessories but as central motifs, unlike it was the case with Kandinsky’s works. In doing so, the artist not only rendered homage to traditional devotional objects, but also put them on par with “high art” - one of the key demands expressed in the “Blaue Reiter” almanac.

"[.] new still life, my Madonna table again"
Münter's painting “Stilleben mit heiligem Georg” from 1911 is depicted in the 1912 Almanac, it is considered an incunabula of the “Blaue Reiter”. The artist had a particular weakness for carved Madonna figures, and had an extra table in her house exclusively reserved for her collection. In a letter to Kandinsky from October 20, 1910, she wrote: “[..] every corner calls for a still life – all the flowers make it so beautiful here! And the table with the 17 Madonnas […] ”(quote from: Gabriele Münter und die Volkskunst, ex. cat. Schlossmuseum Murnau 2017, p. 62). She painted several different variations of this table, which she repeatedly regrouped and rearranged. In another letter from 1910 she reports: “Painted after breakfast - new still life, my Madonna table again. It's already painted a bit simpler than the previous one on a large canvas - but I might try it again - even more simple - abstract, primitive." (Quote from: Gabriele Münter, ex. cat. Lenbachhaus Munich 2017, p. 139). A comparison of our “Stilleben mit Madonna“ with the painting ”Mann im Sessel”“ from 1913 (Bavarian State Painting Collection Munich, inv. no. 11227) testifies to the large variety of combinations and variations Münter chose for the table.

In addition to landscape painting, still lifes are an important haven of peace for Gabriele Münter and at the same time offer her the opportunity to make creative experiments. She arranges the figures and vessels in various combinations, places flowers or twigs in the vases, creating arrangements that, in terms of color and form, become the starting point for new compositions.
This ”Stillleben mit Madonna“ offered here shows how the painter's eye directed the compilation of the objects. Two vases, one narrow, blue and tapered towards the bottom, the other bright red and bulbous, flank the Madonna, which is covered by a branch with large, dark leaves. No other painting by Gabriele Münter shows a Madonna as the main figure and in this size - both in terms of arrangement in the picture and with regard to the picture format. And yet, it is not a reference to Upper Bavarian piety, as the figure merely forms the starting point for a free artistic implementation - "even easier - sometimes very simple" as Münter herself wrote. It is true that the mother and child are clearly recognizable, but the plasticity takes a back seat in favor of a flatness structured by strong colors. The reduction of what is depicted to simplified forms and the framing of the surfaces with dark, shadow-like lines characterize Münter's painting style in the sought-after early Murnau period. It is a time of new beginnings and a lively artistic exchange with the companions of the artist group “Blauer Reiter”, next to Wassily Kandinsky especially with Alexej von Jawlensky. In the important retrospective of life and work of Gabriele Münter, which the Lenbachhaus organized in 2017, the "Stillleben mit Madonna" was also exhibited in the Louisiana Museum in Humlebæk (Denmark) as well as at Museum Ludwig in Cologne, where it gave proof of its outstanding position among the the still lifes in the work of the artist.
Color is the determining element of this diagonal composition, the tension of which arises from the complementary contrast between the arrangement’s red hues and the yellow-green wall in the back of the scene. The colorful bouquet in the bright red vase also shows how the painter transformed the real scene into the picture, in order to develop the vision of a new painting. Gabriele Münter created the flowers like an abstract color fan, which, in outline, almost forms a circle. The delicate branches in the vase on the right, on which small pink flowers resembling note heads grow, make for a counterbalance to this "wheel of life" as well as to the dark leaves protruding into the picture from the left. Suggested color reflections on the dark brown table top, as well as the narrow stripes of the purple-brownish floor we see underneath, increase the radiance. It is an explosion of colors, a glow carried by the joy of the beauty of the world and of life.

“Stilleben mit Madonna” is important for the story of Gabriele Münter’s life. It was created in the house in Murnau, which she had bought in 1909 and where she lived with Kandinsky until he was forced to leave Germany at the beginning of the First World War. The separation hurt for a long time and the artist did not return to Murnau for good before the late 1920s. In 1927 Münter met Johannes Eichner, initially they were only connected by a cautious friendship. In 1930 they went on a trip to the Southern France. He encouraged her on her artistic path, made contacts with gallery owners and organized exhibitions. There is evidence that "Stillleben mit Madonna" was in Eichner's possession until his death, which testifies to the the special significance this work has in the oeuvre of Gabriele Münter. [EH]
More Information
+
Sell
Get a free appraisal for a similar object!
+
Register for
Gabriele Münter
+
Buying from A-Z
+
Contact a specialist
+
Gabriele Münter Biography
Share