Lot 79
Video
Back side
Back side 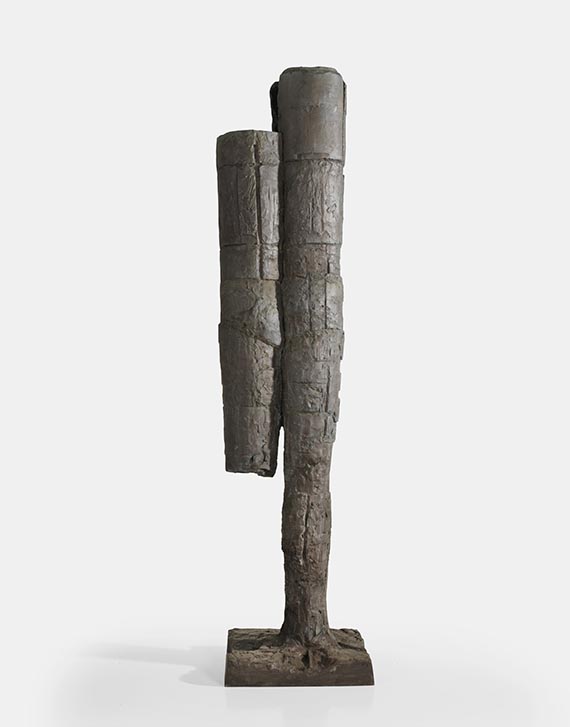 We are grateful to the Atelier Avramidis, Vienna for the kind support in cataloging this lot.

"It is my deepest concern to make my work as little contemporaneous as possible. My ideal conception is to create works that could have been made at any time, like the Quattrocento or in ancient times.“
Joannis Avramidis, quoted from: Ex. cat. Joannis Avramidis, Leopold Museum Vienna, Cologne 2017, p. 215

Fritz Wotruba is the outstanding figure of Austrian sculpture after 1945 and Joannis Avramidis was his most important student. His works made until 1957 shows the influence of his teacher, especially the torsos, of which the "Torso" from 1954 offered here is a prime example. These works have a certain architectural severity. The works of both artists are free from movement and dynamics, they stand unshakable and rest in themselves. They set themselves apart from a turbulent, hectic world, and in their purity they are of contemplative beauty. The "Torso" from 1954 is the result of the decision to try out a new shape of the torso due to the proximity to Wotruba. In the classic sense, the torso is still recognizable as a biped. Avramidis, on the other hand, designs his torso as a vertical body like a tectonically layered column, but attaches a kind of leg stump as an accompanying form and thus finds a greater resemblance to a two-legged figure. Despite the fact that the figure lacks groundedness to a certain extent, it is full of strength and steadfastness. He also retained the omission of the limbs, which arises almost automatically when modeling a torso, in his later works. He refrains from forming a head (unless it is a head sculpture), arms and feet. Avramidis captures the body in its volume and in its spatial disposition while working out the contour. The search for the original form and the omission of insignificant details characterize Avramidis' work from then on, while he was moving further and further away from Wotruba's formal language. In a way, his formal language becomes more delicate, while the figures lose none of their strength. Throughout his life as an artist, the starting point for his sculptural work was the human figure. His steles, torsos, columns and heads always allow the human figure to be recognized as measure and obligation, and at the same time they represent a far-reaching abstraction of it. In his search for a formula for a universally valid model of the human figure, he worked with mathematical proportion studies, similar to Oskar Schlemmer and Constantin Brancusi, and followed in the tradition of Leonardo da Vinci and Albrecht Dürer in his artistic approach. The quest for the permanent, absolute form is also a striving for timelessness. "The timeless always has its justification and is always up-to-date [..] But what only seeks its justification in the topicality will wear out in this quest and remain worthless." (quoted from Wieland Schmied, Joannis Avramidis, Hanover 1966, p. 5) [SM]
More Information
+
Sell
Get a free appraisal for a similar object!
+
Register for
Joannis Avramidis
+
Buying from A-Z
+
Contact a specialist
Share