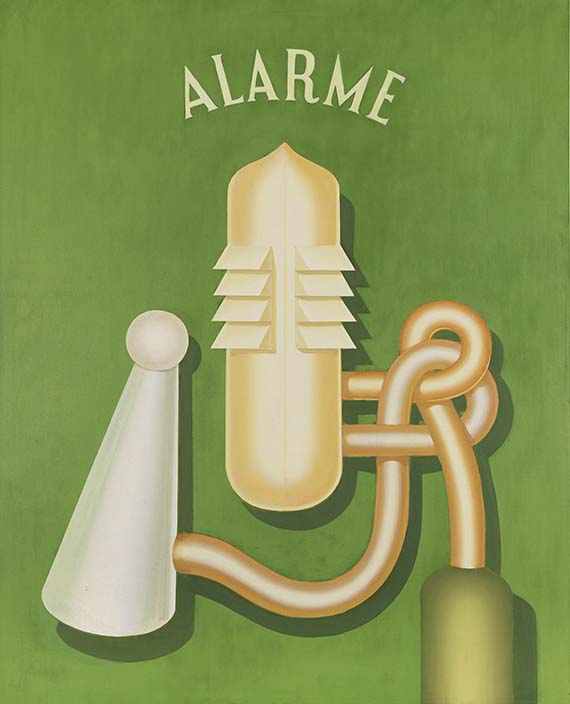 The work is registered in the artist's unpublished catalog raisonné with the number 105. We are grateful to Prof. Dr. Elisa Klapheck for her kind support in cataloging this lot.

Everyday objects with confusing notions
As early as in the late 1950s, Klapheck stood up against German post-war art, which was largely dominated by abstraction and informal art, with a figurative pictorial language. With a precisely executed perfection, together with the flawlessness and eroticism of everyday objects, he provided a stark contrast to the gestural-lyrical abstraction of those years which was detached from the real, pictorial world. He found inspiration with, among others, Marcel Duchamp and the sophisticated, enigmatic and irrational pictorial solutions of Surrealism, but obviously also with contemporary advertising, which at the time showed the viewer a whole new variety of goods. But quite unlike his artist colleagues Andy Warhol or Richard Hamilton, Klapheck alienates the object from the consumer world and, with the help of a strategic alienation, creates his monumentalized representations of everyday objects with very strange moments of confusion. In this way, Klapheck elevated the everyday object to a motif worthy of representation and to the center of his paintings. His mostly mechanical repertoire can be divided into eight groups: typewriters and sewing machines, shoe trees, bicycle clamps, water taps, showers and pipes as well as loudspeakers and sirens, which are mostly integrated into a completely spaceless and timeless composition, heavily alienated and with attributes which undermine their very meaning and usefulness - as in the work offered here. Strong green and light yellow tones dominate in our colorful painting. A strong shadow, very characteristic of Klapheck's work, emphasizes the plasticity of the siren, which openly displays its uselessness with the knotted connecting tubes. The idea for this particular motif came from a drawing by the surrealist artist Christian d'Orgeix (1927-2019), which shows a loudspeaker system commonly used in French train stations.

The abstract idea of an object
Klapheck's machines do not linger in pure figuration, do not imitate models, do not reproduce the real machine, but rather transform themselves into the abstract idea of \u8203\u8203 the respective object. In "La trahison des images / The Treachery of Images (Ceci n'est pas une pipe)" (1929, Los Angeles County Museum of Art), René Magritte addressed the difference between reality and its pictorial representation and Klapheck now also plays with this special relationship. However, with the heading "Alarms" he goes a step further here, because the written word replaces the actual property of the mute siren, which was lost through the artist's alienation strategies: with the knot its is alienated to the point of uselessness, and cannnot sound a warning signal.

Machines with personalities
In connection with Klapheck's skilful staging, his precise painterly brilliance - which he himself described as "super objectivity" - things that are basically so familiar now seem strangely alien, distant and mysteriously removed from our reality. The pictorial idea is also reflected in a special way in the emotionally charged picture titles, which give the objects a voice, so to speak, with which they convey feelings. In "Im Zeichen der Angst" (In the Sign of Fear), Klapheck also gives the initially lifeless machine a certain personality, transforming it into an enigmatic being, even into a highly symbolic, mirrored image of a feeling, into a kind of anxious human being and also into a bit of his own self: "With the help of the machine images I was able, without searching, to rediscover the past and deal with life's problems of the present." (Klapheck, quoted from: exhibition cat. Menschen und Maschinen. Bilder von Konrad Klapheck, Ruhrfestspiele Recklinghausen, Kleve 2006, p. 85)

Klapheck's more than sixty years in art
To this day, Konrad Klapheck is considered one of the most important artists of figurative post-war art in Europe. In the course of his career, the Von der Heydt Museum in Wuppertal, the Palais des Beaux Arts in Brussels, the Museum Boymans-van-Beuningen in Rotterdam, the Hamburger Kunsthalle and the Stiftung Museum Kunstpalast in Düsseldorf have honore hos oeuvre with comprehensive solo shows and retrospective exhibitions. His art is exhibited in the most important international contemporary galleries: at Rudolf Zwirner in Cologne, at Sidney Janis in New York, at the Lelong Gallery in Paris/Zurich and also at the Ernst Beyeler Gallery in Basel. Klapheck's impressive career now spans more than six decades. He participated three times in the documenta in Kassel in the 1960s and 70s . In 1968 one of his works was part of the exhibition "The Machine as Seen at the End of the Mechanical Age" in the Museum of Modern Art in New York and in 1972 the Solomon R. Guggenheim Museum in New York also showed one of his works in the exhibition "Amsterdam - Paris - Dusseldorf". In the 21st century, honors include the Musée d'Orsay in Paris with the exhibition "Konrad Klapheck - Gustave Mureau". [CH]
More Information
+
Sell
Get a free appraisal for a similar object!
+
Register for
Konrad Klapheck
+
Buying from A-Z
+
Contact a specialist
+
Konrad Klapheck Biography
Share