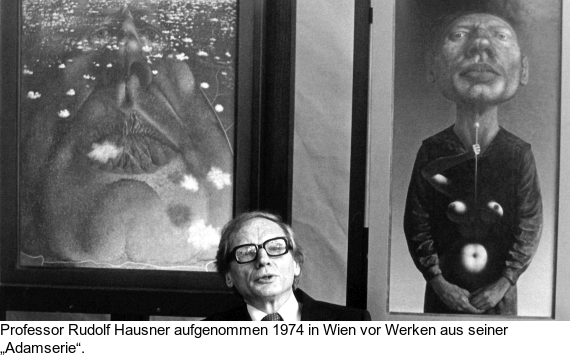 • With the figure of Adam, Hausner's oeuvre underwent an artistic self-discovery.
• The Adam pictures make for a very important work group within his Œuvre.
• Hausner was one of the founding fathers of the Vienna School of Fantastic Realism.
• Paintings by Rudolf Hausner are extremely rare on the international auction market.

LITERATURE:
Günter Engelhard. Rudolf Hausner, Salzburg 1974 (no. 36 with color illu. and detail illu. on the title).
"There are painters that meander from one motif to the other. That's not my world. I am a digger. I started digging with Hausner whom I discovered, whom I found, who imposed himself on me. [..] He is the only one I am always around when something is happening."
Rudolf Hausner.

The theme of "Adam after the Fall" goes back to a work that Rudolf Hausner had begun in 1948. At that time the artist was working on a painting, which he repeatedly modified, sometimes removing the paint layer with a razor blade, painting over, sawing up and finally composing a completely new composition. This strenuous process continued over a strenuous eight years and finally led to the painting ""Der Maschinist und seine Frau“ (The Machinist and His Wife) in 1956. "Only then did I pick up that fragment again, which suddenly stimulated my imagination enormously. Now the picture made rapid progress and the machinist became 'Adam after the Fall of Man'" (Rudolf Hausner, quoted from: Volker Huber (ed.), Rudolf Hausner, p. 72). It is the beginning of the extremely important and significant Adam series, which will keep Rudolf Hausner spellbound for the rest of his work. Rudolf Hausner explains: "Adam, the human being, who has become a part of the apparatus, stands here after his fall from grace. In accordance with his destiny, he has caused his own fate. He knows about it and can still use all those machines that he himself devises and constructs has no longer escaped. His autonomy is a fiction, his freedom relative" (ibid.). This first Adam painting "Adam nach dem Sündenfall" (Adam after the Fall of Man) from 1956 is now in the MUMOK in Vienna. In our painting, he picks up exactly his depiction again in a large format, changed in a few details and further developed in terms of painting technique. This resumption and the more than four years of work on our painting from 1969 to 1973 refer to the lengthy content-related and technical examination of his paintings that was characteristic of Rudolf Hausner. It ultimately leads to the comparatively concentrated oeuvre of only around 200 paintings by the important Austrian artist and founder of Fantastic Realism. [EH]
More Information
+
Sell
Get a free appraisal for a similar object!
+
Register for
Rudolf Hausner
+
Buying from A-Z
+
Contact a specialist
Share