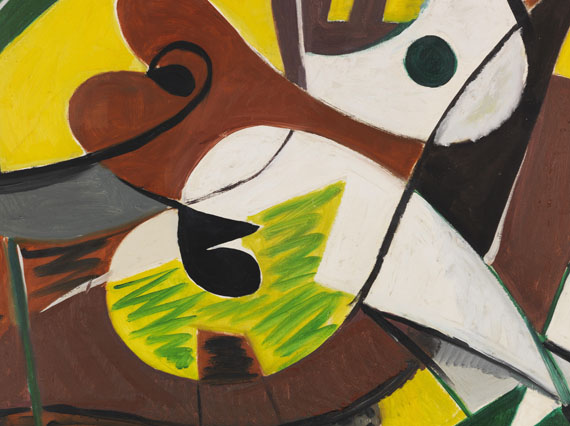 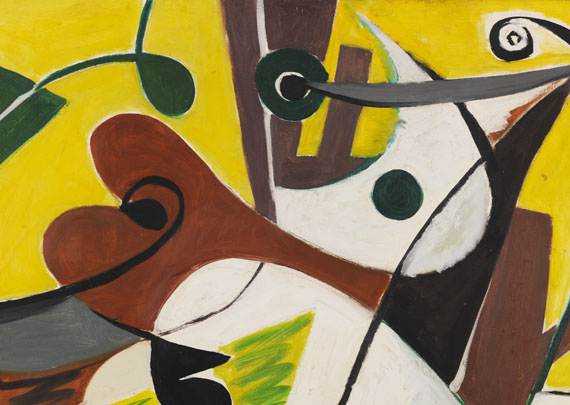 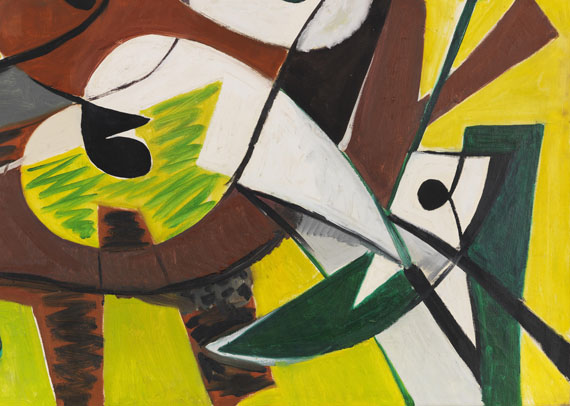 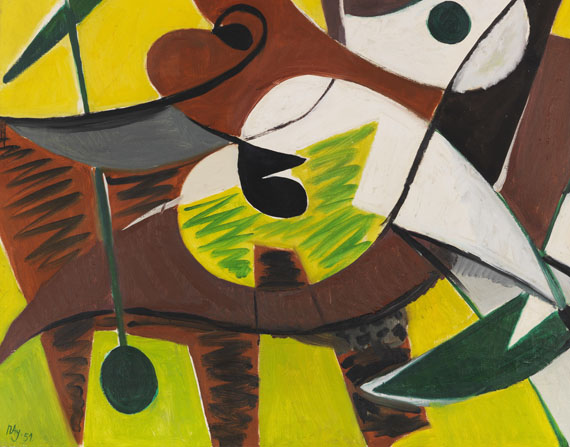 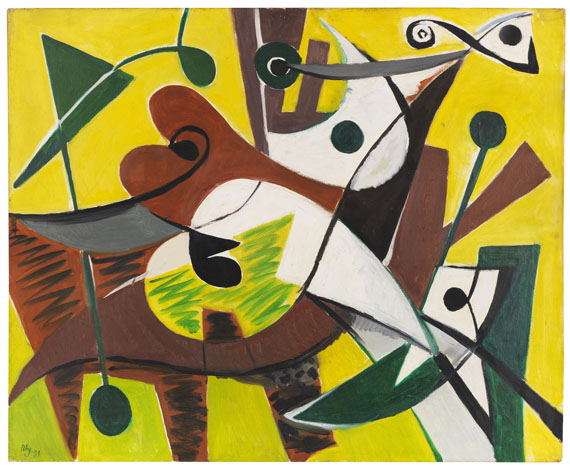 • Colorful document of Nay's occupation with music as a key source of inspiration during this creative period - he arranged the multitude of twists and repetitions according to the principle of the fugue.
• Marks the transition from figuration to abstraction.
• Ernst Wilhelm Nay's "Fugal Pictures" are characterized by a balance between order and motion.
• Shown at the Munich Haus der Kunst the year it was made.

The group of "Fugal Pictures" followed directly after the "Hekate Pictures" and was created before the "Rhythmic Pictures". The creative period of the "Fugal Bilder" began in August / September 1949 and ended with the artist leaving Hofheim, where Nay had settled after the World War II, and moving to Cologne in November 1951. Following the ever increasing condensation of the figurative image structures in the 'Hekate-Pictures', the occupation with abstract surface structures seemed like a logical consequence to Nay. A vital part of this is the consideration to create the “complex of archetypes in connection with rhythm and dynamics” so openly that, according to Nay, “the actual formal theme of my art as a whole” can develop. (E. W. Nay, Regesten zu Leben und Werk, in: E. W. Nay 1902-1968. Bilder und Dokumente, Nuremberg and Munich 1980, p. 62.)

Nay's artistic development was always characterized by rhythm and dynamics, from the clearly structured "Fischer" and "Lofoten" pictures, which simplify concreteness, to the abstractly structured "Hekate“ pictures, which still show figurative notions. Nay attained a point where he had to check the forms and figuration of his own 'iconography', which had becomes catchy, for their durability, or, as Werner Haftmann, expert of the work and friend of the artist, described it so aptly, “separating the individual layers of colored surfaces, to isolate them as individual qualities and work through them, and to clearly define them as individual and independent elements of the spatial order, but also as isolated color voices.”(Werner Haftmann, EW Nay, Cologne 1991, p. 153).
Regardless of the obvious influence musical perception had on Nay's work, and which the artist expressed with the titles he gave his works from this short creative period - Nay made the word 'fugal' up, it is not mentioned in any dictionary - the further step to set colors and shapes in an absolute manner gained in importance. It is hardly surprising that the path Nay took entails a constant dematerialization, a liberation from the representational, so that the visual language becomes more progressive and increasingly abstract.
The fugue gives rhythm to the painting

In music, the fugue is defined as a very perfect and well-developed type of movement, with a main theme and its processing by all voices. The melodic peculiarity of the theme should be preserved - opposites, contrapuntal improvisations, such as enlargements, reductions or reversals of the theme create possibilities for variation, compositional freedom of the fugue, which, in principle, is strictly structured. Nay used this compositional principle borrowed from music, he arranged the colors according to their sound quality, uses the color as a concrete form to suggest harmony and dissonance, similar to the effect of music.

Based on this principle, we see strictly structured surfaces, abstract patterns with a tendency towards ornamentation, superimposed by a confusing play of cubic color shapes and pictorial symbols that evoke swinging spatial layers with strongly contrasting color values. The transition from the "Hekate" to the "Fugale“ Bilder" is fluid, at best a stricter and more stringent composition can be mentioned as a 'superficial', first distinguishing feature. In this sense, Nay did not suddenly change his compositional principle, but rather varied it or specified the color forms, a constant process, building on what had been attained, and separating the individual compositional elements more strictly from one another. With the clarification of the form, the color approaches the surface, and with the resulting unbroken application of paint, Nay once again increased the unusual, sometimes provocative color accord.
A development that continue and led to increasingly ornamental surfaces made up of non-representational shapes such as loops, lines, points. Nay's "Fugal Pictures" are by no means to be seen as informal at this point. His newly attained visual language and pictorial development are more subject to a strict coordination and systematization than to the informal improvisation of autonomous color forms. Nays fugal compositions are subject to the regularity of the ornament. Nay composes the shapes and colors that follow an infinite rapport, like composing tones, creating contrasts as well as thematic intensification, such as the slight, steady introduction to the actual motif and its final variation, interrupted and supplemented by occasionally alienating cadence, such as the the neatly set dotted lines here, which casually indicate the departure into a new painterly complex of themes. Nay himself spoke of ‘fugal design‘, and he arranged the various entanglements with modified repetition according to the musical principle of the fugue. "The implementation of the theme," said Nay, "results in precisely this constructive form of the fugue and creates an interlude that could be called passages." (E. W. Nay, Regesten zu Leben und Werk, p. 140).
Owing to its strict basic chords, the canon of colors and forms invented by Nay appears to come from a cosmos in which free-floating forms and corresponding colors, detached from material objectivity and emancipated from representational nature, move just like the tones of music, thoughts and feelings. In this way, the "Fugal Pictures" are analogies to music, a unity of color, sound and feeling. The action between the large basic forms and the ornamental elements is usually very agitated, we seldom find balance and silence or sober image zones. Like hardly any other contemporary artist, Nay speaks to the viewer through the sound of color, provokes feelings, harmony or dissonance with his intuitive color compositions, which, depending on the cold and warmth, the sound and beauty of the color properties, create a feeling of perfect balance and engaging affection or can evoke negative attitudes and insecurity. [MvL]
More Information
+
Sell
Get a free appraisal for a similar object!
+
Register for
Ernst Wilhelm Nay
+
Buying from A-Z
+
Contact a specialist
+
Ernst Wilhelm Nay Biography
Share