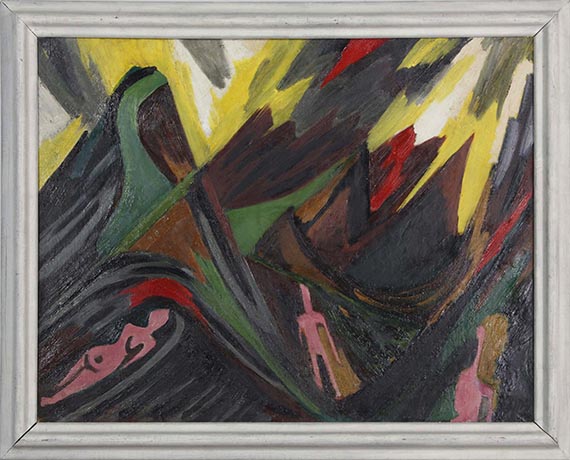 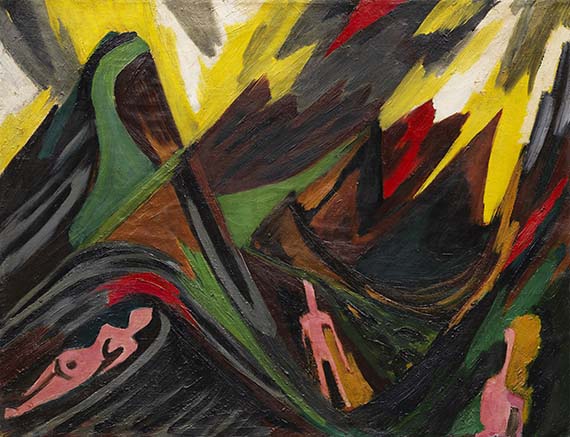 • From the important series of the Lofoten pictures.
• Colorful depiction with an especially dense composition.
• Other paintings from this series are in, among others, the Neue Nationalgalerie, Berlin, the Bavarian State Painting Collections, Munich and the Folkwang Museum, Essen.

Ernst Wilhelm Nay shows us three naked human figures in a rough, rugged landscape. Surrounded by steep mountain slopes, they appear as a part of nature, strongly integrated into the landscape.

With the support of his friend, the Lübeck museum director Carl Georg Heise, and the art collector Carl Hagemann, Nay was able to visit Edvard Munch in Norway in 1937 and then embarked on his journey up the coast to the Lofoten Islands. He made the characteristic landscape the subject of a whole series of paintings that marked a first peak in Nay's painterly work. In doing so, he developed impressive panoramas with human figures and animals from predominantly contourless color surfaces.

In the case of our painting, Nay creates a dense and exciting composition that focuses on the relationship between man and nature. The unusual color palette is one of the features with which he gives the depiction its special impact: the mountain formations, which are predominantly kept in dark colors, and the sky, which is laid out in yellow, red, white and gray tones, convey an equally impressive and somber mood. The narrow, jagged forms give the painting its characteristic dynamics, which seems to spread over to the figures. Their color accents alone prevent them from visually blending into the landscape, while the mountains tower above them, reminiscent of the storm-tossed sea. In particular, the female figure positioned on the left edge seems to literally sink into the landscape.

Nay presents the rough beauty of the Lofoten Islands, which is so formative for him, brought together in one captivating pictorial idea. It is the concentrated implementation of his unique conception of landscape that makes the painting "People in the Lofoten" stand out among his works of these years. [AM]
More Information
+
Sell
Get a free appraisal for a similar object!
+
Register for
Ernst Wilhelm Nay
+
Buying from A-Z
+
Contact a specialist
+
Ernst Wilhelm Nay Biography
Share