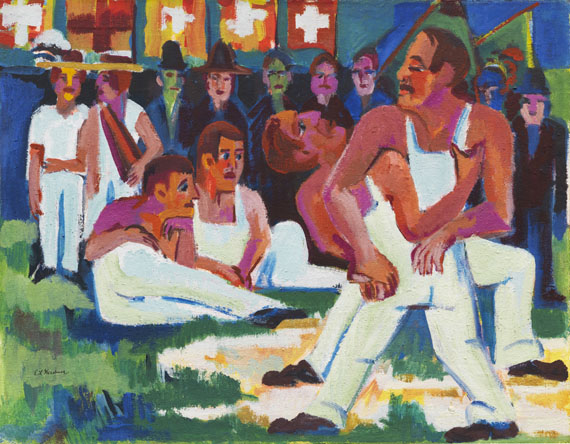 "[.] the feeling that we all share, to find inspiration in life and to be subordinate to the experience."
E. L. Kirchner in the "Brücke" chronic from 1913, quoted from: Eberhard W. Kornfeld, Ernst Ludwig Kirchner. Nachzeichnung seines Lebens, Bern 1979, p. 43.

Schwingen (Wrestling). A Swiss national sport
With the work offered here, Kirchner followed the credo in the "Brücke" chronicle from 1913, "to take the stimulus to create from life and to subordinate oneself to experience." (quoted from: Magdalena M. Moeller, in: E. L. Kirchner. The "Straßenszenen" 1913-1915, Munich 1993, p. 31). It shows a scene from a traditional Swiss wrestling festival. The so-called “Schwingen“ is a variant of freestyle wrestling, which is particularly popular in German-speaking Switzerland, in which the competitors try to throw their opponents to the ground with 'swings', targeted movement sequences with grips on the opponent's trousers. During the competitions, the wrestlers actually wear special, particularly heavy duty shorts over their clothing, which Kirchner - with artistic freedom - completely ignored in favor of a clearer, reduced representation of the figures, and instead only shows the wrestlers in tight-fitting sportswear resembling wrestling suits. The competitions are held on a circular area padded with sawdust and take place between early summer and autumn within regional and cantonal wrestling festivals, which are usually held annually. In Kirchner's painting, the current summer season is suggested in the lush green of the grass and in the light clothing of the depicted persons. Among the participants, a general distinction is made between the 'Sennenschwinger', members of pure wrestling clubs, and the 'Turnerschwinger' from gymnastics clubs, who also practice other sports in their respective clubs and who can be identified by their all white wrestling clothing, long white trousers and a white top. The competitor who is finally crowned king of wrestling traditionally receives a living prize, often a cow. The popular tradition of wrestling has existed for several hundred years and is still considered a Swiss national sport.
In Davos, the wrestling festivals have been held regularly since 1881 at the end of July, on the so-called 'Heuersonntag'. In 1912 the wrestling association of the Davos region was founded and in 1923 - the year our painting was created - the first official wrestling festival was held under the name 'Sertig-Schwinget', an important regional event which Kirchner may well have attended as visitor.

Artistic change and personal new beginning. Kirchner's Davos creative period
Kirchner's move to Switzerland not only entailed major private changes, but of course also had an enormous impact on his entire artistic work. From the noisy, hectic city with its diverse cultural and social leisure opportunities and exciting nightlife, the artist now found himself in a rural setting in the Swiss mountains. A major change and a turning point in his life, which of course not only affected his personal well-being, but also brought about significant changes in the subject matter and ultimately also had an impact on the style of his artistic work. The 1920s saw the end of the 'edgy', hard-edged style of his Berlin days. Kirchner found his way to a much more structured, two-dimensional style of painting and his very own form of abstraction and simplification. In terms of motifs and form, an enormous artistic diversity unfolded in his works, which is also impressively documented in our painting "Ringer". Kirchner creates a particularly lively composition here, with which he succeeds to translate the highly dynamic social event into a two-dimensional, very personal formal language that once again identifies him as one of the most important German Expressionists. Kirchner designs the performance like the stage design and the choreography of a play. In the foreground he puts the Schwinger, bursting with power and sporting a fashionable mustache, while in the background, below several prominently placed Swiss flags, he depicts a crowd of spectators facing us as staffage and extras. Between foreground and background, other athletes dressed in white, relaxing on the grass, take on supporting roles. Confidently and with broad brushstrokes, Kirchner distributes the strong, colorful colors across the canvas, plays with complementary and cold-warm contrasts, leaves little room for small details and focuses on the intertwined bodies and movement sequences of the competing protagonists within the sporting scene that fills the entire screen and tells a lot about Kirchner's diverse creative powers during these important years in Davos.

A picture with German-Swiss provenance
The painting offered here, with its typically Swiss subject, remained in Swiss private collections for decades before it entered the Hermann Gerlinger Collection in the 1980s. At first it belonged to the older tailor Johann Matter (1873-1942) from Davos, who was well acquainted with Kirchner. "An old tailor who has retired is often with us now. He is an art lover and collects pictures. He shows us again that a love of art does not require any prior training, but a mental attitude [..]. The man is strange and lonely among his peers, because he has intellectual interests that make the others laugh. Through him I get an idea of the life of a craftsman, which is very interesting, because he speaks freely about his life. The beginning of intellectual life for most people is curiosity is in a good sense, it turns into thirst for knowledge and leads to a deeper occupation." (Letter to Gustav Schiefler, October 28, 1928, quoted from: Wolfgang Henze, Ernst Ludwig Kirchner - Gustav Schiefler. Briefwechsel 1910-1935/1938, Stuttgart 1990, p. 570). In the late 20th century, the painting finally found its way into Hermann Gerlinger's important collection of Expressionism, in which it occupied an important position as a striking example of Kirchner's strong artistic creative phase in Davos, well before the flat-abstract figuration and the so-called 'carpet style' of his late work began to play an important place. [CH]
More Information
+
Sell
Get a free appraisal for a similar object!
+
Register for
Ernst Ludwig Kirchner
+
Buying from A-Z
+
Contact a specialist
+
Ernst Ludwig Kirchner Biography
Share