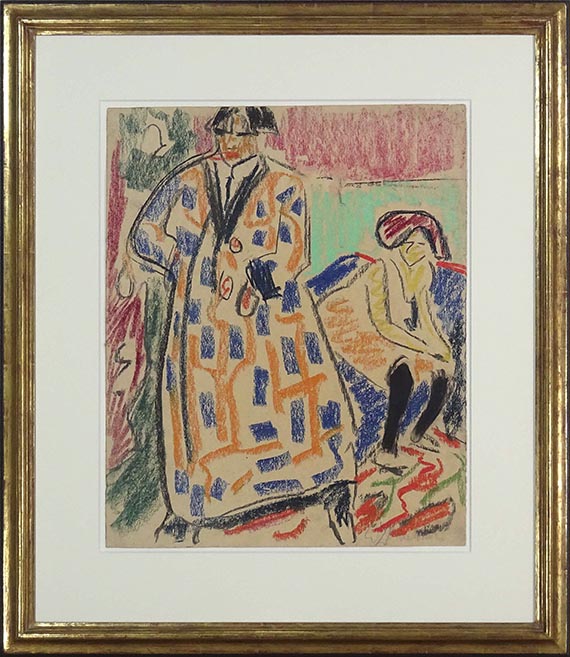 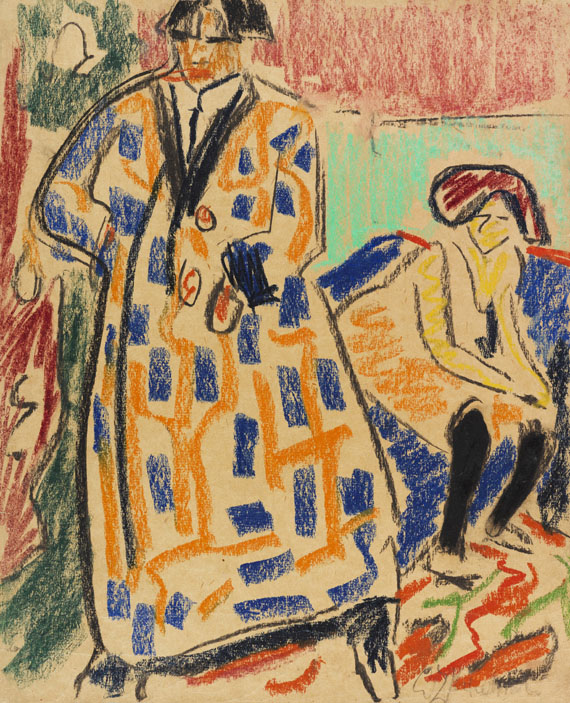 • Well-executed self-portrait in intensive colors from the best days of the "Brücke".
• In terms of size, quality and coloring, this is an utmost rare work of museum quality.
• Self-assured portrayal as the painter genius of German Expressionism.
• This work shows a more immediate and clearly more primal pictorial idea that it is the case with the belatedly revised painting in the Kunsthalle Hamburg (Gordon 121, 1910/1926).
• The motif was used for the cover of the catalog and the poster of the comprehensive Kirchner retrospective at Kunsthalle Nuremberg in 1991.

The work is documented at the Ernst Ludwig Kirchner Archive Wichtrach/Bern.

On November 1, 1909, Kirchner made another shop in Dresden his place of residence, just a few houses down, on Berliner Strasse 80. On November 2, he enthusiastically wrote a postcard to his friend Erich Heckel in Dangast: "I'm happy at Berlinerstrasse 80 ground floor." There he also decorated the rooms lavishly, studio and apartment at the same time, which went down in Kirchner's motif history as a central testimony to his art and his attitude to life. Many pictures and drawings from the Dresden years up until the late autumn of 1911 show how the interior design became more and more complete, how new sculptures and pieces of furniture and textile wall designs were added. So this studio apartment was not only the workshop in which the artist found his motifs, but also the world in which he lived and worked. Just as the life that the artist led with his friends and companions in this apartment entered into the art, the art with which he decorated the apartment had an effect on life. In this context, this motif, which shows the artist in a colorful bathrobe, appears to be outstanding. Not only did Kirchner immediately transfer this chalk drawing into a painting, which he then painted over in 1926 in Frauenkirch, Switzerland, after he had returned from a trip to Germany, to Chemnitz, Dresden and Berlin. He also mimics the iconographic staging of well-known painter princes such as Diego Velázquez in his painting "Las Meninas" from 1656 at the easel. Kirchner reduces the courtly hustle and bustle behind Velázquez to the situation in his studio, where his partner Dodo (Doris Grosse) is watching her boyfriend. In the loosely rendered pastel, the artist stands in the foreground in his magnificent bathrobe and without any special attributes. In the painting he holds brush and palette in his hands and thus identifies himself as a pipe-smoking painter. The woman who sits behind him on the bed as his lover thus becomes the embodiment of the art in front of which his life is decided, about whose life he shall render account in drawings and pictures. [MvL]
More Information
+
Sell
Get a free appraisal for a similar object!
+
Register for
Ernst Ludwig Kirchner
+
Buying from A-Z
+
Contact a specialist
+
Ernst Ludwig Kirchner Biography
Share