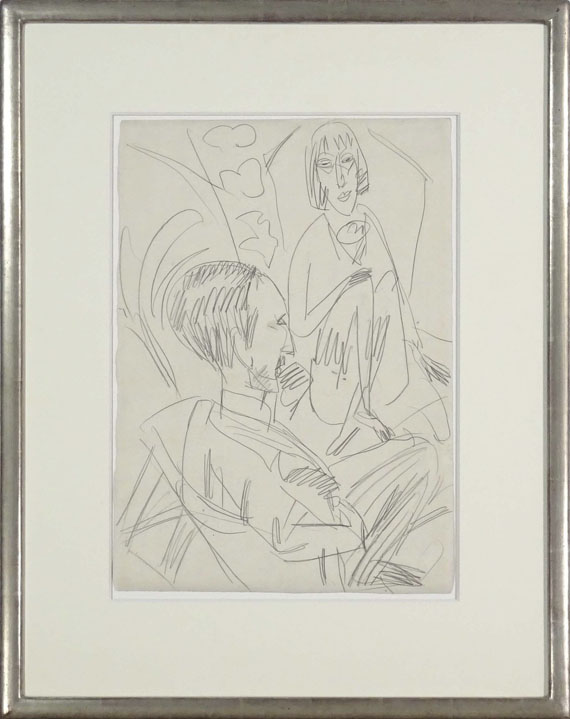 • Large-size and dynamic drawing of the artist's private surroundings.
• The scene shows Kirchner's partner Erna Schilling talking to Hans Gewecke, a student at the drawing school "MUIM", which E. L. Kirchner and Max Pechstein had founded in Berlin in 1911.
• Contemporary photographs help to identify the detail of the interior decoration suggested behind Erna as a part of the artist's lavishly decorated studio.

In October 1911, Kirchner left Dresden and moved to Berlin, into the same house on Durlacher Strasse 14 in Berlin-Wilmersdorf where Max Pechstein had lived for a long time. In December 1911, together with Pechstein, he founded the drawing school "Moderner Unterricht in Malerei", short "MUIM" (Modern Lessons in Painting). Kirchner and Pechstein seem to have felt sufficiently mature and established in their professions to teach others. In October, Kirchner wrote to his patrons, the married couple Luise and Gustav Schiefler in Hamburg: "Pechstein and I, we hope to contribute to the new art movement" (Kirchner to Luise Schiefler, in: Briefwechsel, edited by Wolfgang Henze, Stuttgart 1990, p. 48). Although the two artists did a lot to ensure their success, Kirchner printed two different color woodcuts as advertising posters, only two students are known to date: Hans Gewecke and Werner Gothein. Erna Schilling and Kirchner became friends with both of them and thus the new friends enlivened scenes in the Berlin studio and as male bathers frolicking about in the summer of 1913 on Fehmarn. In the studio in Berlin, however, the focus was increasingly on finding a motif: Kirchner was inspired by encounters in his studio, such as the intensive conversation between Erna and Hans Gewecke, which Kirchner followed and drew with quick strokes. An everyday scene from the artist's personal world. The large-format drawing was probably made after the stay on Fehmarn in October 1913. Kirchner had meanwhile moved his studio to Körnerstraße 45 in Berlin-Friedenau. Behind the seated Erna one can sense a tiny detail of the exuberant room decoration of pictures, wall hangings and tablecloths, a carefully staged space that Kirchner set up for his world of images. [MvL]
More Information
+
Sell
Get a free appraisal for a similar object!
+
Register for
Ernst Ludwig Kirchner
+
Buying from A-Z
+
Contact a specialist
+
Ernst Ludwig Kirchner Biography
Share