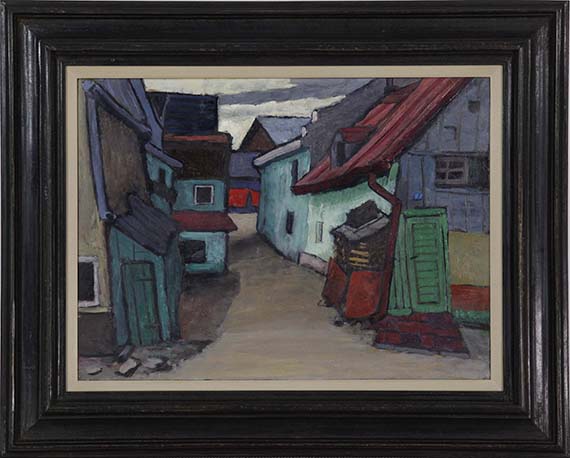 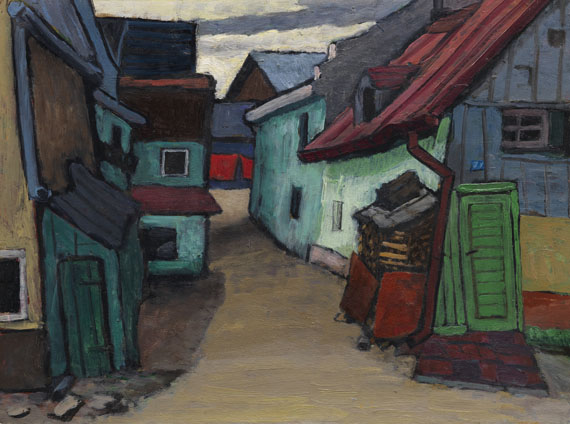 Accompanied by a written confirmation from the Gabriele Münter- and Johannes Eichner-Foundation from April 29, 2022. The painting will be included into the catalog raisonné of paintings by Gabriele Münter.

PROVENANCE:
Dalzell Hatfield Galleries (1961) (with a label on the reverse)
Private collection USA (ever since family-owned).

In the second half of the 19th century, Munich's population had shot up by a four-fold. On the high bank of the Isar, the families who had come from rural regions lived in cramped ‘Herbergshäuser‘. When Gabriele Münter painted these houses in 1934, many of them were already a thing of the past. The small, differently aligned houses were built of wood and stone, and were often only separated from each other by narrow streets. From the turn of the century, more and more stately apartment residences were built instead, they still characterize the districts of Haidhausen and Bogenhausen today. But Münter was interested in the simple people and their surroundings, here on the outskirts of the big city that the Nazi regime had declared the ‘capital of the movement‘. She was looking for the remains of the incorporated village settlements in the city.

Ever since her first visits to Murnau, Gabriele Münter hds included village life in her canon. In addition to the depictions of landscapes, she found one of the most important themes in her oeuvre in her town- and cityscapes. After depicting houses and street scenes in the 1920s in a somewhat more distanced and broader way, Münter returned to the colorful, condensed expressiveness of the early Murnau years in the early 1930s. Some of her most famous paintings were created at that time, among them "Das Russenhaus" (The Russian House) from 1931 ( Städtische Galerie im Lenbachhaus, Munich). Another view of the "Münchner Vorstadthäuser" (Munich suburban houses), similar to our painting in terms of motif, from 1934 is also known and has featured in several exhibitions. "Aussere Wienerstraße" shows these small cramped craftsmen's houses with great immediacy. The modern city with its streets, sewers and green spaces is still a thing of the future for the depicted location. Turquoise shades of green determine the color palette alongside reddish brown and light brown, and even the small section of the sky is only illuminated by subdued sunlight. A gray cloud is just passing in the sky. Gabriele Münter consciously formulates completely contrary to her depictions of rural clarity. This expressive work shows the importance of Gabriele Münter as a clear and thoroughly critical observer. [EH]
More Information
+
Sell
Get a free appraisal for a similar object!
+
Register for
Gabriele Münter
+
Buying from A-Z
+
Contact a specialist
+
Gabriele Münter Biography
Share